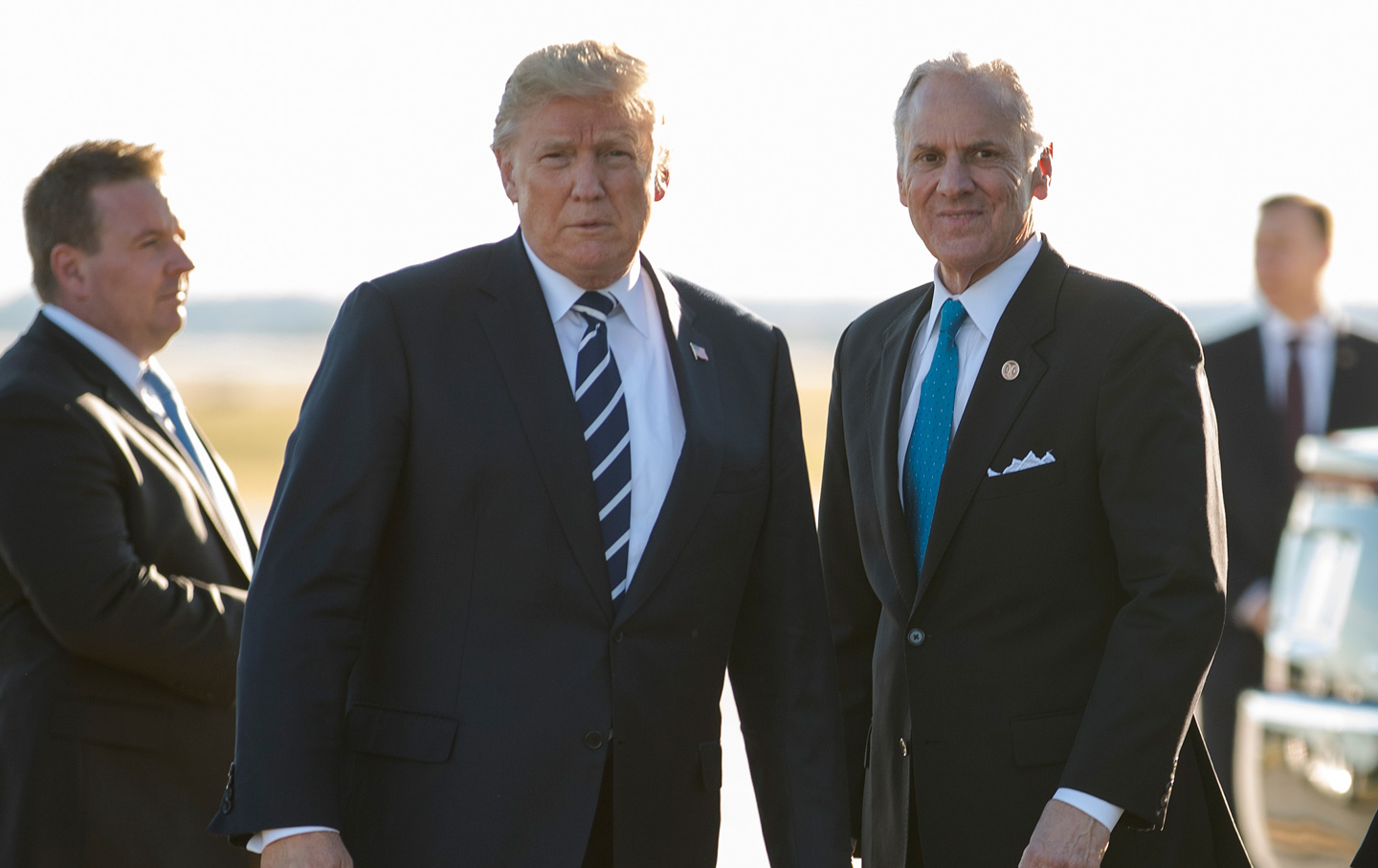 In an unusual move, South Carolina Governor Henry McMaster, a long-standing ally of President Donald Trump, has personally intervened with the Department of Health and Human Services to secure a religious exemption from federal nondiscrimination laws for a Christian foster-care-placement agency in his state. Without the exemption, the placement agency, Miracle Hill Ministries, of Greenville, is at risk of losing its license because it refuses to place foster children with non-Christian families. Like other such agencies that participate in state foster-care programs that receive federal funds, Miracle Hill would normally be barred from discriminating on the basis of religion.

McMaster, a Republican who is running for reelection, acted in February after his own state agency, the Department of Social Services (DSS), warned Miracle Hill that its license as a child-placing agency (CPA) was at risk after it had given regulators “reason to believe” that it “intends to refuse to provide its services as a licensed Child Placing Agency to families who are not specifically Christians from a Protestant denomination,” according to documents obtained by the American Civil Liberties Union through a public-records request and shared with The Nation and the Investigative Fund. In addition to requesting federal intervention, McMaster issued an executive order exempting faith-based CPAs from state laws that prohibit religious discrimination.

The possibility that the federal government would permit a taxpayer-funded program to allow a participant to use “religious eligibility criteria” in order to make it a “Christian-only program” is “pretty stunning,” said Leslie Cooper, deputy director of the ACLU’s LGBT & HIV Project. Such an exemption would be akin to the government itself using religious criteria to discriminate against participants in federal programs.

McMaster’s moves come amid escalating conservative efforts at the federal and state level to expand religious exemptions for taxpayer-funded faith-based organizations that provide child-welfare and other social services. While South Carolina has not passed a law permitting such religious discrimination, nine other states—Virginia, South Dakota, North Dakota, Michigan, Texas, Alabama, Oklahoma, Mississippi, and Kansas—have laws that specifically allow child-placement agencies to refuse to place children with families on religious grounds. These efforts have accelerated in the Trump era; five of those nine states passed their laws since 2017.

Civil-rights advocates have criticized these laws as opening the door to a variety of religion-based discrimination, including permitting agencies claiming a religious objection to refuse to serve LGBTQ people, single parents, interfaith couples, and others. The Human Rights Campaign has described these laws as “simply one more effort to write anti-LGBTQ discrimination into law.”

By not mentioning sexual orientation or gender identity, these laws “sound more neutral,” said David Barkey, Southeastern-area counsel for the Anti-Defamation League, which has tracked the events in South Carolina. But the consequence, he warned, is that “they’re potentially impacting more people” by permitting discrimination based on religion.

South Carolina DSS spokeswoman Karen Wingo said in an interview that Miracle Hill has not publicly stated a refusal to place children with LGBTQ parents, and she was not aware whether that had become an issue. “I know the focus started based on the requirement that prospective foster and adoptive parents adhere to Christian principles outlined by Miracle Hill,” she said.

Miracle Hill declined to comment for this article. In January, Miracle Hill reported in its newsletter that it had “made it clear” to state regulators that “the heart of our ministry was tied to our common faith in Jesus Christ, and that while we would help any healthy family find a way to provide foster care by helping connect them to some other agency, Miracle Hill would only work directly with Christian families.”

Wingo said the department had worked for a year to find a “reasonable resolution” with Miracle Hill, as it is a “valued and tremendous partner” that has been responsible for recruiting 14–15 percent of the foster-care homes in the state. The state is awaiting feedback from the federal government before deciding how to handle the licensing issue, she said.

In making the request directly to HHS, McMaster has positioned himself as Miracle Hill’s champion. “It is important,” the governor wrote to Miracle Hill’s President and CEO Reid Lehman in February, “that religious organizations not be required to sacrifice the tenets of their faith in order to serve the children of South Carolina.”

McMaster appealed directly to Steven Wagner, acting assistant secretary for the Administration for Children and Families (ACF), the division at the Department of Health and Human Services that administers the federal program that provides funding to states to provide foster care. Wagner is a Trump-administration hire who had served in the George W. Bush administration’s Center for Faith-Based and Community Initiatives at the Department of Housing and Urban Development. The governor argued to Wagner that federal nondiscrimination regulations “effectively require CPAs to abandon their religious beliefs or forgo the available public licensure and funding,” which he claimed violates their rights under the Constitution and the federal Religious Freedom Restoration Act.

Those regulations, first proposed in July 2016, took effect just before Trump took office in January 2017. They prohibit discrimination on the basis of age, disability, sex, race, color, national origin, religion, sexual orientation, or gender identity, and require that “all recipients must treat as valid the marriages of same-sex couples.”

In response to follow-up inquiries in March from McMaster’s staff, Wagner promised that he was “pushing this hard” within HHS. Neither McMaster’s office nor HHS responded to a request for comment.

As far as the ACLU knows, South Carolina is the only state to seek such an exemption from federal nondiscrimination regulations for faith-based providers. The outcome of McMaster’s request to HHS could set a precedent for other states, and thus determine whether faith-based providers across the country can turn away prospective foster-care parents on religious grounds.

His letter lands on desks at HHS at a time when the Trump administration appears intent on expanding religious exemptions for faith-based social-service providers funded by the array of federal programs housed at the agency, including adoption and foster care.

After scuttling a wide-ranging draft executive order that would have permitted expansive latitude for such discrimination, last year Trump instead ordered Attorney General Jeff Sessions to draft “religious freedom” guidance for federal agencies. That guidance, released in October 2017, encouraged “a dangerously broad interpretation of religious freedom laws that will open the door to discrimination against LGBT people, women, and religious minorities,” including interpreting federal law “to countenance discrimination that is not now sanctioned and it encourages private groups to discriminate with government funds,” according to the ACLU.

The ‘Masterpiece Cakeshop’ Decision Is Not As Harmless as You Think

Earlier this year, HHS’s Office for Civil Rights (OCR) launched a Conscience and Religious Freedom Division, touting it as a vehicle to vindicate the rights of faith-based providers who claim the government infringes on their religious beliefs.

At a recent panel discussion at the Heritage Foundation—where OCR’s director, Roger Severino, worked before he was hired to the HHS post—Shannon Royce, the director of the Center for Faith-based and Neighborhood Partnerships at HHS, encouraged faith-based and foster-care and adoption providers who believe they have experienced a “burden” to their religious expression to “file a request for religious accommodation under the Religious Freedom Restoration Act” with both OCR and ACF.

Lawmakers are also pressuring HHS on the issue. Last month, congressional Republicans wrote a letter to Trump, asking that HHS be required to broadly shield faith-based foster-care and adoption providers from having to comply with nondiscrimination provisions, citing Trump’s executive orders on “religious freedom” and Sessions’s guidance.

Lehman and McMaster’s supporters in the Christian right hope that they can once again count on the Trump administration to come to the rescue of conservative Christians who claim the government is infringing on their rights. “Thanks to the Trump administration, there’s already a year’s worth of precedent defending organizations like Lehman,” the Family Research Council’s Tony Perkins wrote after McMaster’s actions became public. “Maybe eventually, the other side will get the message: fighting the First Amendment is a losing battle!”

But civil-rights advocates are alarmed. “It’s just morally wrong,” said the ADL’s Barkey, “for the government to say these children in need don’t get a home because this particular agency has a problem with who the parents are—not because they’re not going to be good parents, but because of who they are.”