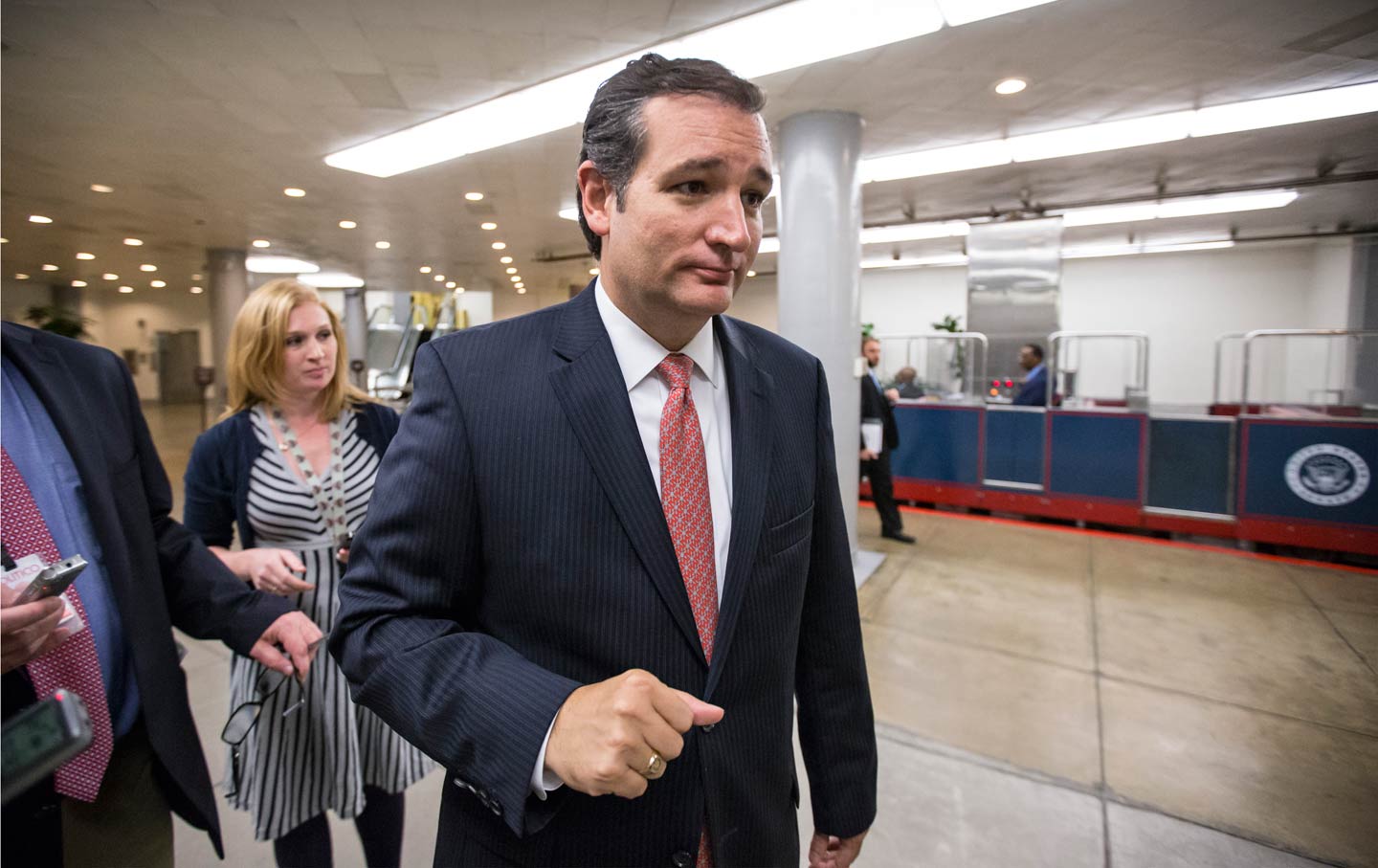 Senator Ted Cruz seems a little overexcited about his latest surge in the surreal Republican primary campaign. He’s now running second in Iowa, just behind Donald Trump, and he’s tied with Ben Carson for third in the latest Quinnipiac poll. Just this week, a giddy Cruz smacked his closest rival, Senator Marco Rubio, as a junior neocon, insulted Donald Trump by insisting he has no chance at the GOP nomination, and Monday night he threw a haymaker at Democrats for talking “nonsense” about a “war on women.”

Democrats should thank the over-confident arch-conservative: With goofy talk about “rubbers” that came straight out of the 1950s, Cruz perfectly explained the backwards thinking about women that gets imperfectly telegraphed in “war on women” sloganeering.

Asked a question about contraception at an Iowa town-hall meeting, Cruz stepped into the batter’s box and swung at what he considered a nice, fat pitch. He was ready.

“I have never met anybody, any conservative who wants to ban contraceptives,” he began, calling the notion a “made-up, nonsense example.” He’d have been better off just stopping there, but he couldn’t help himself.

“Last I checked, we don’t have a rubber shortage in America. When I was in college we had a machine in the bathroom, you put 50 cents in and voila! So yes, anyone who wants contraceptives can access them, but it’s an utterly made-up nonsense issue.”

Having worked himself up, Cruz then accused other Republicans of not being man enough to take on the “nonsense issue.”

“When the war on women came up, Republicans would curl up in a ball, they’d say, ‘Don’t hurt me.’ Jiminy Cricket!” Not Ted Cruz: When Hillary Clinton comes at him, he’s ready. The former senator and secretary of state can’t run on her record, he claims.

“So what do you do? You go, ‘Ah, ha! Condom police. I’m gonna make up a completely made up threat and try to scare a bunch of folks into thinking someone’s going to steal their birth control.’ What nonsense.”

But Ted Cruz is going to fight that nonsense.

Where do I begin? Jiminy Cricket?

First of all, Cruz really didn’t listen to the question he was asked, or else he didn’t care about it. The woman in the audience wanted to know what the GOP would do about “making contraception available to women who want to control their own bodies.”

Buying “rubbers” from a machine in the men’s room isn’t the answer; it’s the opposite of an answer, since it explicitly leaves contraception in the hands of men. Some historians cite the invention of “the pill” as the single most influential advance in the liberation of women. A woman, herself, could control her own fertility; she didn’t have to rely on a man buying “rubbers” from a machine. But somehow Cruz didn’t talk about oral contraception, or any other kind, besides “rubbers.”

While Cruz claims Republicans can assure women they don’t want to “steal their birth control,” they do want to make them pay for it again. The contraceptive mandate in the Affordable Care Act requires insurance companies to cover birth control without a co-pay. The GOP wants to repeal the entire ACA, but the party is particularly opposed to the contraceptive mandate. Cruz has called it “illegal,” and he supports broadening provisions that let corporations claim a moral exemption.

That wouldn’t legally count as “stealing their birth control,” but it might feel like it to a lot of working- and middle-class women. Generic oral contraceptives are fairly affordable, but some women have health needs that require them to take newer, more expensive brands that can run more than $50 a month. Other women have to rely on implants or injections that cost more than $1,000 a year.

But that’s not the only way Cruz’s policies threaten women’s access to birth control. He supports “personhood” legislation, which could make illegal certain forms of contraception. He falsely claims that the oral contraceptive Plan B is an abortion drug, and opposes its coverage. He supports a bill that would overturn a Washington, DC, law prohibiting employers from using “religious freedom” arguments to fire women for using birth control, seeking in vitro fertilization or having an abortion.

To sum up: Cruz has worked very hard to make sure that women’s reproductive choices come down to asking a man to buy a 50-cent rubber in the men’s room on his way home.

In his zeal to combat the notion of a “war on women,” the junior Texas senator instead helped Democrats open a new front: Republicans are clearly trying to recreate the America of the 1950s, where women rely on men to decide if and when to start families. Cruz has always seemed straight out of the ’50s himself. It’s not just his eerie physical resemblance to Senator Joseph McCarthy; he looks like he was born middle-aged, an envoy from another, earlier era. It’s hard to imagine him buying “rubbers” in the men’s room in college, and I regret that he made me try.

And “Jiminy Cricket?” Who under the age of 80 says that? But I digress.

With all due respect to Senator Sanders, please allow this feminist a moment to imagine Cruz pulling out his “rubbers” line in a general-election debate with Clinton. I can hear her laughter now.

Before that, though, all of the Democratic candidates should be mocking the cocky right-winger for his notion of contraceptive “choice” everywhere they go. And thanking him for making explicit the terms of the “war on women.” Jiminy Cricket, this could be fun.