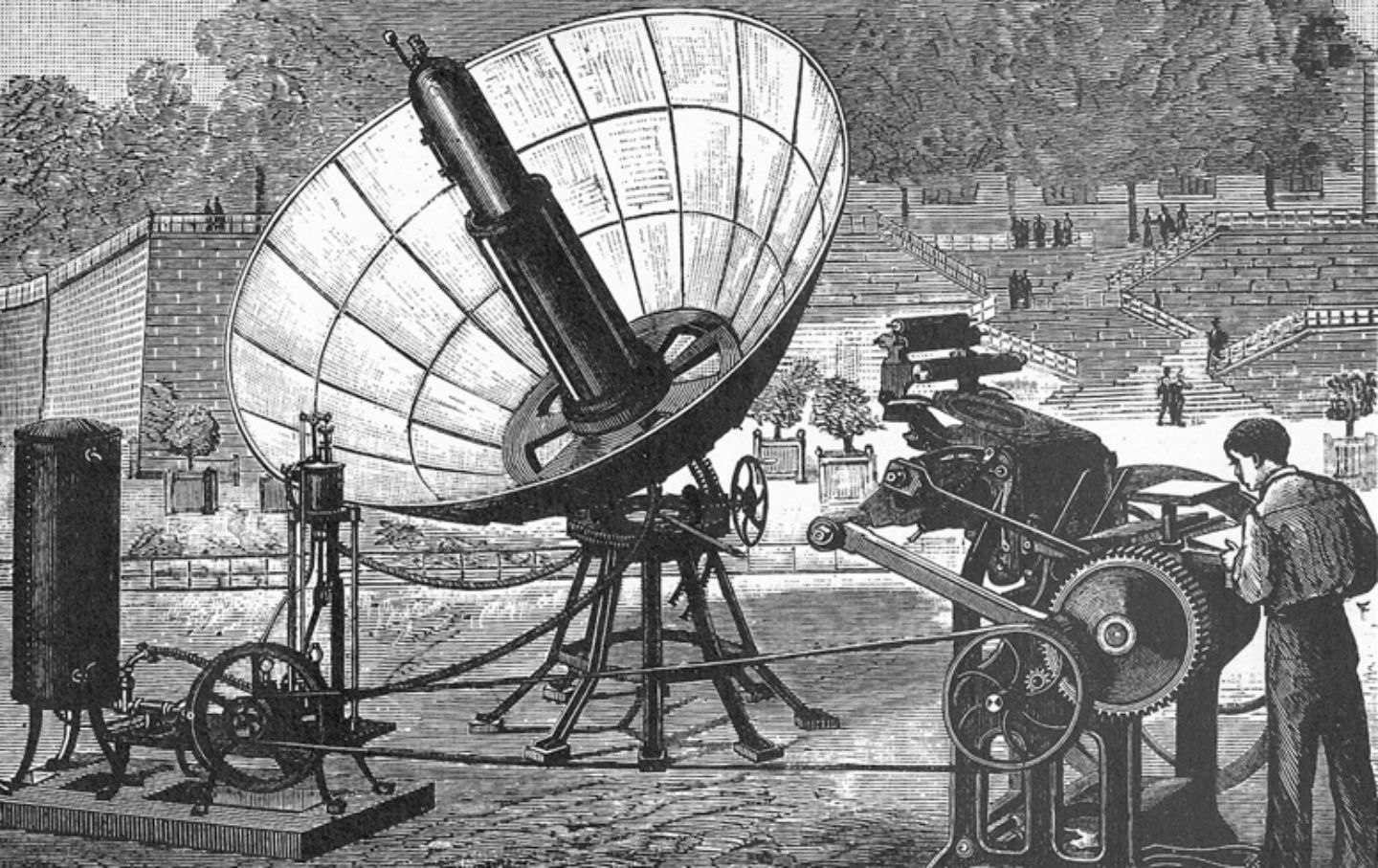 “The Great Energy Transition to Solar and Wind Is Underway,” declared a headline yesterday on the environmental-news website EcoWatch. Thanks in no small part to Obama-era government subsidies, renewable energy appears poised for a much-belated breakthrough over the next few years.

Yet it cannot be understated how much time has been lost, as we can see from a little feature that appeared in The Nation’s issue of May 29, 1966.

The item ran in the magazine’s column on scientific issues under the headline “UTILIZATION OF THE SUN’S HEAT.”

Referring to a Nation piece some weeks earlier about “the ultimate exhaustion of the coal fields…and the possibility of substituting other sources of power for the fossil fuel which is now so important an element in the existing order of human society,” the item summarized the 1830s experiments of the English scientist and inventor John Herschel. On an expedition near the Cape of Good Hope in South Africa—where, the Nation column noted, “the sun pours down its rays without hindrance”—Herschel trapped the sun’s heat in a mahogany box he covered with glass and painted black on the inside. He then put uncooked food in the box and waited to see what would happen.

The Nation quoted Herschel’s description of what happened once the box reached over 240 degrees Fahrenheit after two weeks:

As these temperatures far surpass that of boiling water, some amusing experiments were made by exposing eggs, fruit, meat, etc.…all of which, after a moderate length of exposure, were found perfectly cooked—the eggs being rendered hard and powdery to the centre; and on one occasion a very respectable stew of meat and vegetables was prepared, and eaten with no small relish by the entertained bystanders.

Expanding on Herschel’s own reports, The Nation’s science columnist—whose name I haven’t yet been able to deduce—suggested that “the sun’s heat could be converted into mechanical force through the intervention of thermo-electricity.” The writer specifically said that “a thermo-electric battery” might be placed atop the box, “and the power thus generated would be susceptible of direct application.”

Almost a century and a half later, it seems we have finally been convinced to give the idea a try.

Curious about how we covered something? E-mail me at rkreitner [at] thenation [dot] com. Subscribers to The Nation can access our fully searchable digital archive, which contains thousands of historic articles, essays and reviews, letters to the editor and editorials dating back to July 6, 1865.