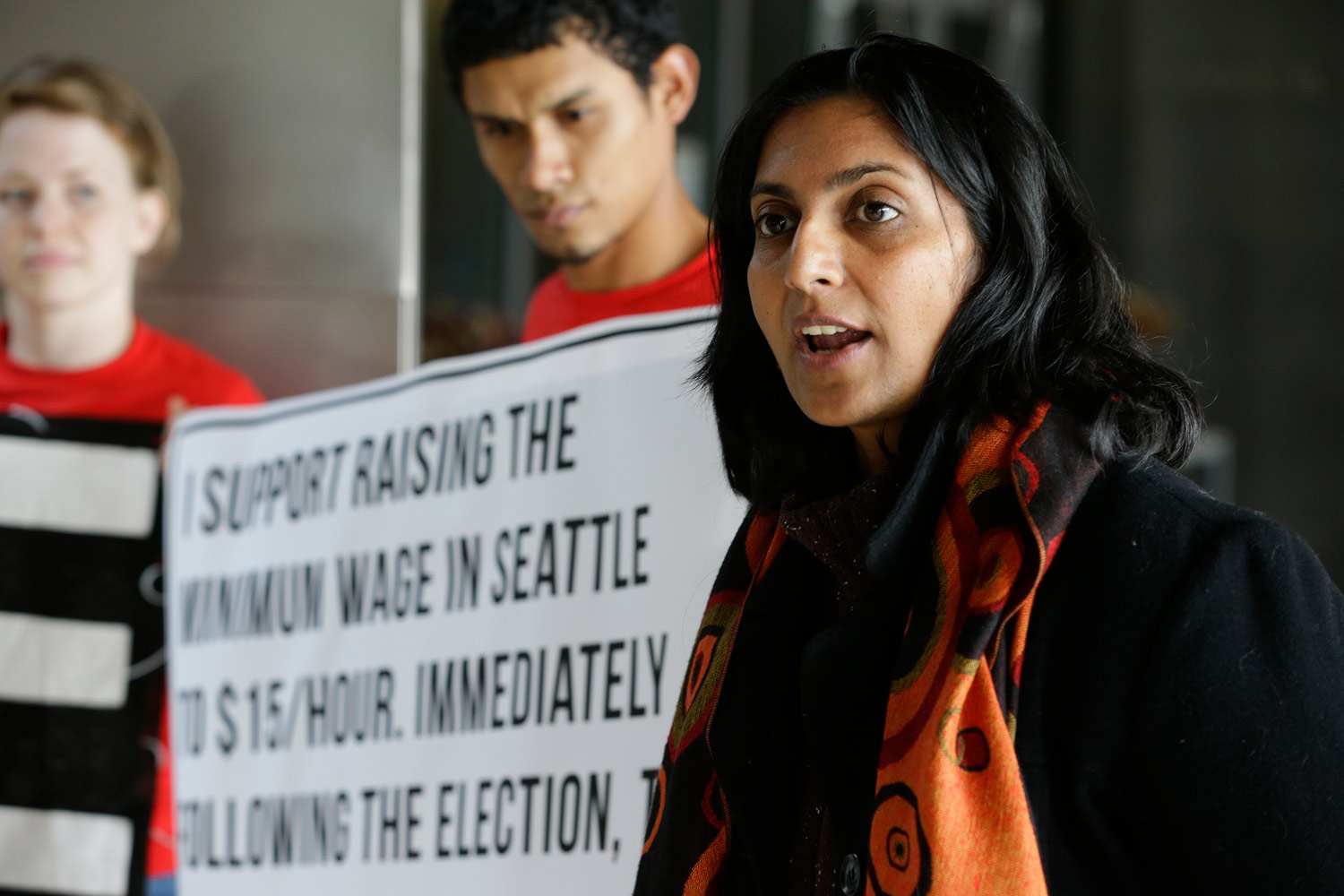 When Machinists union members rallied in Seattle in mid-November to protest Boeing’s demand for wage and pension cuts, the newest municipal official roused the crowd. “We salute the Machinists for having the courage to reject this blatant highway robbery from the executives of Boeing in pursuit of their endless, endless thirst for private profit.” Kshama Sawant, an economics professor and Occupy Seattle activist who had just won a citywide City Council seat, said threats to shift production out of state could be met with an eminent domain move allowing workers to “take over the factories.”

Condemning private profit and talking up worker control of factories? That sounds kinda socialist. And socialists don’t win elections in the United States, right? Wrong. Sawant is the most recent in a long line of “out” socialists elected to city councils, mayoralties and even seats in Congress over the past century. Yet her win drew headlines as far away as her native India.

What made Sawant’s victory historic was the context. Since 2008, Republican politicians and their media echo chambers have built a cottage industry around the comic claim that Barack Obama is a socialist. The man who took single-payer healthcare off the table and refused to break up “too big to fail” banks wouldn’t qualify as a mild social democrat, let alone the raging “Marxist” of Rush Limbaugh’s hallucinations.

Still, the charge persists. In October, Sarah Palin was peddling the fantasy that problems with the Affordable Care Act website were part of an elaborate scheme to steer America toward “full socialized medicine.” The rhetorical strategy imagines that the mere suggestion of a socialist or socialized tendency is a deal killer. It’s not just Republicans who buy into the notion; Democrats, with rare exceptions like Representative John Conyers and Senator Bernie Sanders, are almost as quick as conservatives to distance themselves from the s-word.

Even socialists have a hard time agreeing on definitions of socialism, so there may not be a consensus on what all those Americans feel positive about. But in an era of lingering unemployment, cuts to public education and public services, and ever-widening income inequality, it should not be surprising that millions of Americans are ill at ease with capitalism—at least as it’s defined by Ted Cruz and Paul Ryan—and that many of them are open to alternatives. Nor should it be surprising that, after all the silly ranting about Obama’s “socialism,” voters are increasingly immune to redbaiting. In New York City this fall, Bill de Blasio’s Republican opponent seized on a New York Times story that said the Democratic mayoral candidate had once expressed an interest in “democratic socialism”; he attacked de Blasio for running a campaign “directly out of the Marxist playbook.” The New York Post featured an image of the Democrat next to a hammer and sickle. De Blasio laughed the attacks off, continued to describe himself as a progressive and won 73 percent of the vote.

Frustration with America’s constrained political discourse, and the dysfunctional governance that extends from it, is palpable, and people are looking for fresh policies and approaches. Virginia Libertarian gubernatorial candidate Robert Sarvis just won 15 percent of the under-30 vote, securing almost 150,000 votes statewide. Political and media elites acknowledge that libertarian ideas can attract votes, but they still wrestle with the notion that socialist ideas might also have appeal. Sawant put the prospect to the test in Seattle, a city with a population larger than the District of Columbia, Vermont and Wyoming. Identifying herself as a “Socialist Alternative” candidate who would fight for a $15 minimum wage, taxation of millionaires and expanded public services, she beat a sixteen-year incumbent who had broad support from mainstream Democrats and environmental groups. It’s fair to suggest that much of her backing came from Seattle voters who wanted to shake things up: on the same Election Day, the city turned out a mayor and changed its system of electing Council members. But it is also fair to suggest, as Sawant does, that her win has “shown the strongest skeptics that the socialist label is not a bad one for a grassroots campaign to succeed.”

That’s not a new notion. The acceptance of socialist candidates and ideas has waxed and waned in American history. With the rapid evolution of our politics in an age of instant communication and growing anger at income inequality, fear of the s-word is diminishing. And voters—especially younger ones—are beginning to demand a politics that, instead of rejecting solutions or candidates based on a label, considers their merits.