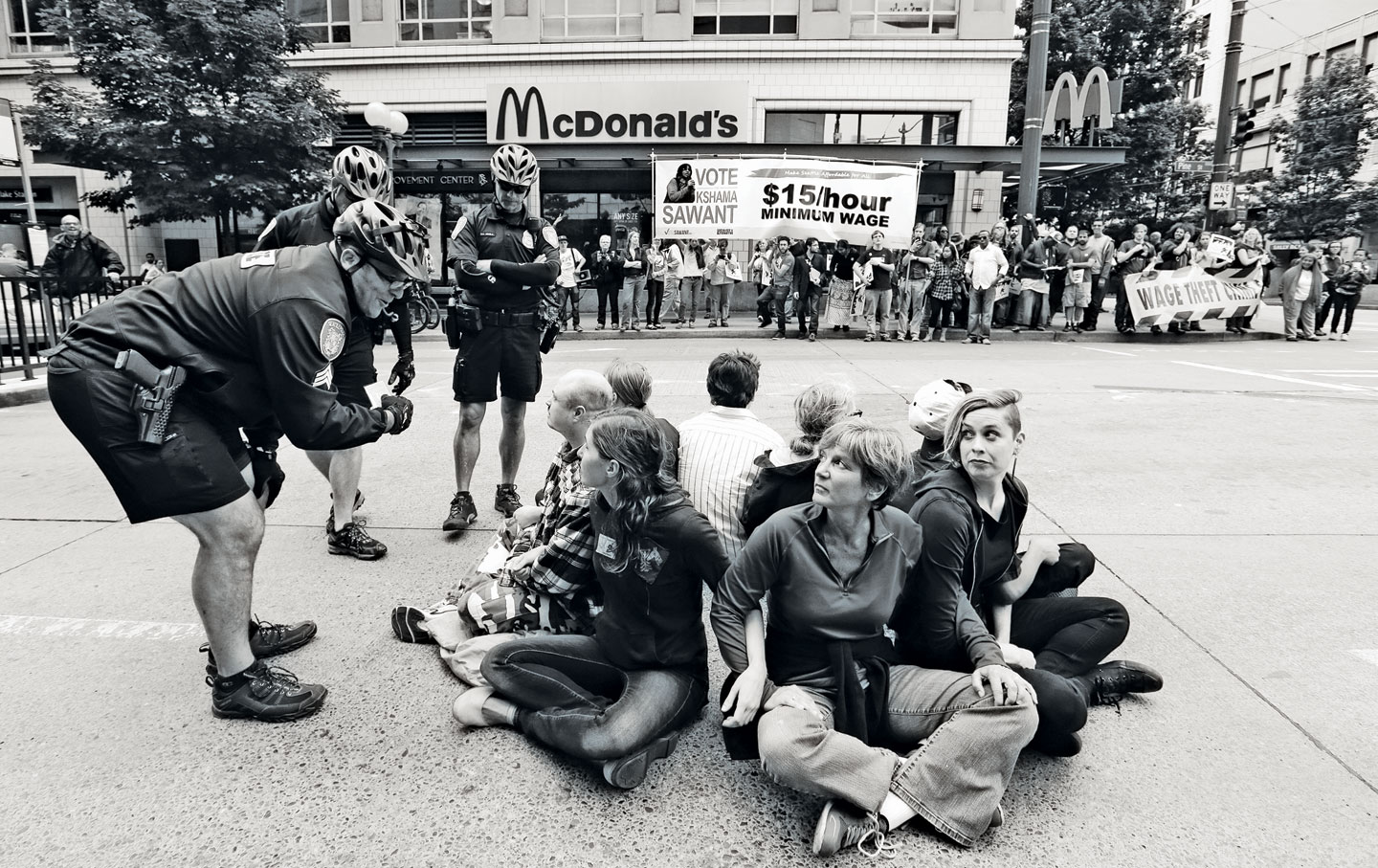 As the sun set on the Occupy Seattle encampment in December 2011, the question “What next?” hung in the air, as it did over Zuccotti Park in New York City. The tents were gone, our spirits were dampened, but an awakened sense of empowerment prevailed.

The movement had given voice to a widespread fury at big business and a recognition of the gaping class divide. Key to Occupy’s success were the thousands of young people who had helped elect President Obama and had completed their own first steps toward achieving the American Dream, only to see their college degrees translate into crushing student debt and poverty wages.

Inside and outside the encampments, discussions about the moral bankruptcy of Wall Street began to evolve into questions about the viability of capitalism itself. A revived search for an alternative had begun.

Socialism has been declared dead many times. After the fall of the Berlin Wall and the ensuing collapse of the “communist” regimes in Eastern Europe, the global capitalist elite launched an unprecedented ideological offensive. The obituary was written not only for socialism, but for the basic ideas of collective struggle by the working class.

Now, after three decades of virtually untrammeled neoliberal policies, with class questions again brought to the fore by unprecedented levels of inequality, we have been witnessing a renewed interest in socialist ideas. Half of the young Americans surveyed between the ages of 18 and 29 viewed socialism positively, according to a Pew Research Center poll in December 2011.

The winter of Occupy sparked a debate in my own organization, Socialist Alternative. Looking ahead to the 2012 presidential-election year and the inevitable pull of corporate politics, Socialist Alternative called for independent candidates representing the 99 percent to run across the country.

Here in Seattle, I filed in a race for the Washington State House as a socialist “Occupy” candidate. The Democratic Party establishment has virtual monopoly control over Seattle politics, as it does in most urban centers. The city has increasingly become a playground for the wealthy, with the nation’s fastest-rising rents and a rapidly gentrifying urban core. My campaign was a referendum on corporate, neoliberal politics: I flatly rejected cuts to education, mass transit and social services, while calling for taxes on the rich and a $15 minimum wage.

After receiving one of the highest votes for a socialist candidate in decades, I ran again in 2013 for the Seattle City Council. Once again, my campaign made bold anticorporate demands—for rent control, a “millionaires’ tax” to fully fund social services, and a citywide $15 minimum wage. Running independently as a Socialist Alternative candidate helped me tap into voters’ anger at the status quo of corporate politics. In Seattle, the council members pay themselves $120,000 a year, the second-highest council salary among the nation’s forty largest cities. I accepted no corporate donations and pledged to take only the average Seattle worker’s wage of $40,000. I also promised to use the rest of my salary to help build social movements.

The campaign attracted more than 400 volunteers, mobilized support in the labor movement, established a foothold among left-wing Democratic Party activists, won the strong endorsement of the city’s largest alternative newspaper (The Stranger), and developed an unstoppable momentum for action on the minimum wage. None of this would have been possible had I been aligned with corporate interests. All the other candidates in the city elections—most of them Democratic Party members—scrupulously avoided the issues raised in my campaign. As a testament to the power of grassroots movements, however, most politicians were forced to respond in the election’s final weeks, professing tepid support for the increasingly popular call to raise the minimum wage.

This time I won the election, receiving nearly 95,000 votes to defeat an entrenched sixteen-year incumbent. The Seattle City Council now has nine council members: eight Democrats and one socialist.

The prospects for creating a majority coalition on any of the issues raised in my campaign would be nonexistent without massively mobilizing people outside the council chambers. Yet holding even that single seat in city government has provided an indispensable platform when it comes to winning real gains for ordinary people.

A few weeks after my election, Socialist Alternative and I launched 15 Now, the grassroots campaign that worked with the Seattle labor movement to build support for a $15 minimum wage. Last April, after three months of intense campaigning and movement-building with a citywide network of neighborhood groups, 15 Now filed a “charter amendment.” Business leaders, fearing that the ballot measure could end up being passed as a voter referendum in November, decided to limit their losses by crafting a weaker $15-per-hour ordinance—and then fought to undercut that with loopholes.

The loopholes (including a longer phase-in period, a tip credit, and subminimum wages for teens and persons with disabilities) reflected the strength of the corporate counteroffensive to our movement’s efforts and the complicity of the Democratic Party. But the final result will be a $3 billion transfer of wealth over ten years from corporations to Seattle’s 100,000 lowest-paid workers.

This same process, with the relative strength of movements measured against that of big business, played out on issue after issue in my first year on the council. We organized a “People’s Budget” coalition and won increased funding for social services, including year-round homeless shelters for women and basic services for homeless encampments. We also won $1.6 million in raises for low-paid city workers and strengthened the enforcement of labor laws. We fought alongside tenants and community organizations to defeat an Orwellian attack on low-income housing called “Stepping Forward,” forcing the Seattle Housing Authority to back off from plans to begin 400 percent increases on rental rates over five years. Organizing with indigenous activists, we established Indigenous People’s Day (on the day celebrated federally as Columbus Day), putting a spotlight on the brutality and genocide unleashed under colonialism, and on the need to fight against the continued poverty and marginalization of indigenous communities. We have also helped publicize and support campaigns against regressive taxation, rising rents, climate change and the school-to-prison pipeline.

All of these gains are only a taste of the fundamental change we need. While successfully defending low-income housing was a victory, we also need to build thousands more units. While raising funds for social services is a real step forward, we need tens of millions more just to address critical needs. Genuine socialism means planning the entire society and economy on a rational, democratic and sustainable basis—delivering a high standard of living to all while protecting the environment.

Any attempt to develop socialist municipal policies will inevitably come up against resource and technological constraints, as well as political attacks from outside the locality. This can even be seen in the fight for the $15 minimum wage, when Seattle’s victory was immediately threatened by potential statewide initiatives aimed at outlawing local minimum-wage laws. Socialists can overcome these challenges by drawing strength from the interdependence of working people nationally and internationally.

The American left will have to build outside the Republican and Democratic parties, whose leaders have repeatedly demonstrated that they will go to any lengths to defend the superwealthy and protect the capitalist system. Progress can happen only by building independent working-class power.

This year will see continued struggles against economic inequality, racial and gender oppression, police brutality and climate change. As we confront these challenges, I hope that my experience in office can serve as a useful example of socialist politics in action, with practical relevance for rebuilding the American workers’ movement.

Our victories will depend on whether the left champions the interests of working people and the downtrodden—and does so no matter how much this comes into conflict with what is acceptable to the ruling elite or compatible with capitalism.

That is the essence of a socialist approach to politics.