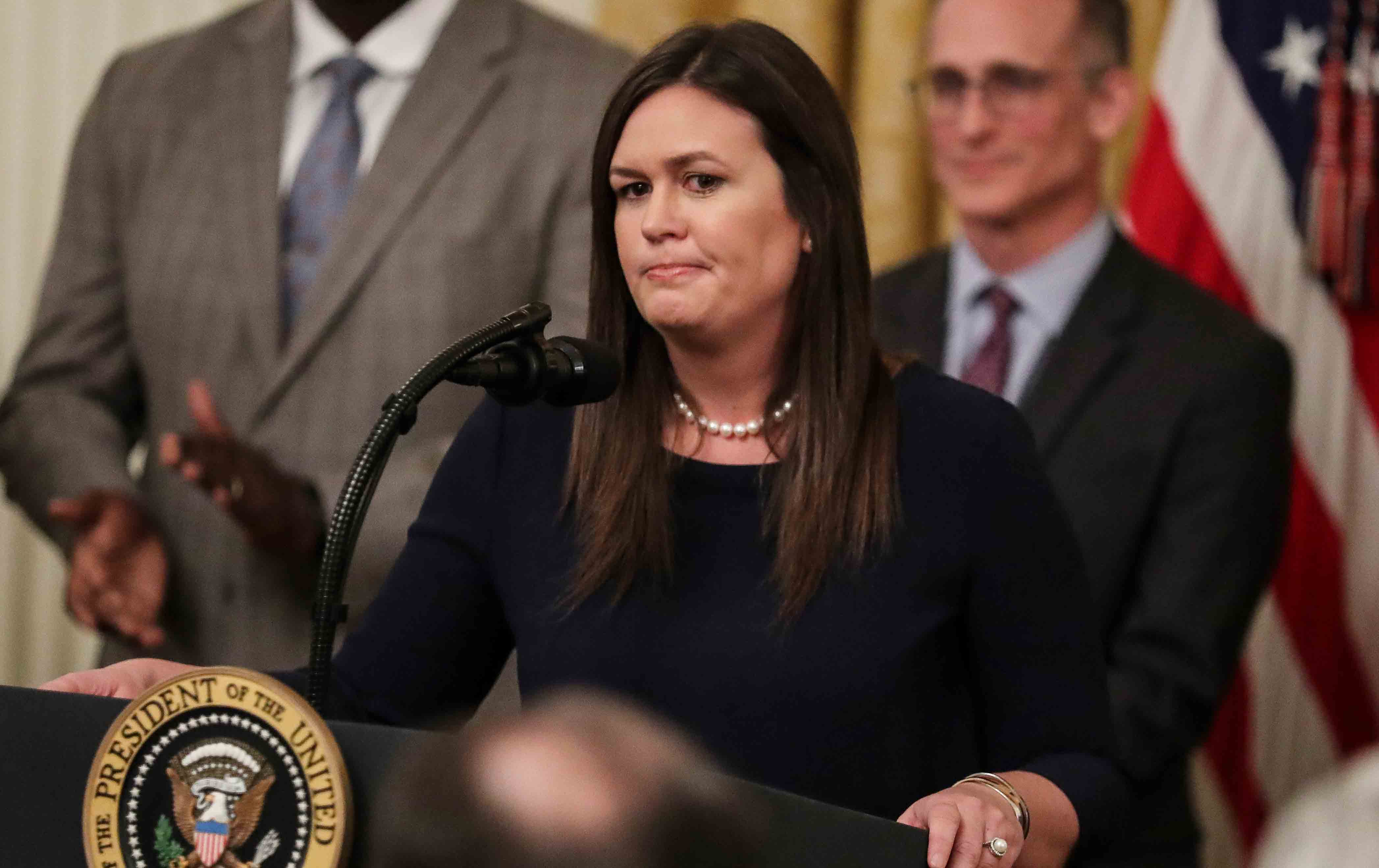 Sarah Sanders speaks at an event about second-chance hiring and criminal-justice reform event in the East Room of the White House in Washington, DC, on June 13, 2019. (Oliver Contreras / Sipa via AP Images)

The just-announced departure of White House Press Secretary Sarah Sanders means very little. It’s not like she’s conducting the daily briefing; she stopped doing that more than three months ago. Reporters say the briefing room, which once bustled with jousting journalists and administration figures every single day, is now dusty and forlorn—a metaphor for the state of truth and justice under the Donald Trump administration.

Sanders lied so routinely it’s tough to make a list of her greatest hits. One big one came out in Robert Mueller’s report, when she told reporters she’d heard from “countless” FBI agents who were happy that Trump fired FBI Director James Comey in May 2017. That was pretty clearly untrue; Comey was popular with FBI staff. Then she lied about her lie, telling Mueller it was a “slip of the tongue,” even though she was reading from a prepared text.

As recently as Monday, Sanders did not deny reports that Trump told his aides to lie about recent state polling showing him trailing Joe Biden in a 2020 matchup—maybe that was progress, that she didn’t lie—but she essentially defended Trump even if he did so. “Look, I think the polling got it completely wrong in 2016, I don’t think it’s right now,” she told CNN.

Of course, sometimes she got caught lying because Trump hung her out to dry. She tried to stick with the cover story around Comey’s firing—that it had to do with Deputy Attorney General Rod Rosenstein’s finding fault with his handling of the Hillary Clinton e-mail investigation. But hours later Trump told Lester Holt, “I was gonna fire him regardless of the recommendation,” and linked it to the Russia investigation.

Veteran ABC newsman Sam Donaldson called Sanders the most mendacious of all the press secretaries he’s seen going back to the John F. Kennedy administration. “She deserves a lifetime achievement Oscar for lying,” he said.

No doubt Sanders will be missed by the president because of her loyalty, but he has other staffers ready for their lying closeup. On Thursday, Deputy Press Secretary Hogan Gidley tried to deny that Trump told George Stephanopoulos that he would welcome opposition research from a foreign country, even though video of the brazen and possibly treasonous claim was running every 20 minutes on cable news all day long. “He was very clear,” Gidley told Fox’s Shep Smith, the best journalist at the network. “If he got information and it was nefarious or ill-gotten in any way and it was wrongdoing he would absolutely take it to the FBI.”

“The president responded the FBI Director is wrong,” Smith countered. Smith was right; Gidley was lying. Maybe he was auditioning for Sanders’s role.

Also Thursday came the news that the US Office of Special Counsel said Kellyanne Conway should be removed from her White House role for multiple Hatch Act violations, essentially conducting partisan politics on government time. The head of the office, a Trump appointee, also was disturbed that Conway routinely publicly disparaged the investigation. “If you’re trying to silence me through the Hatch Act, it’s not going to work,” she told reporters. “Let me know when the jail sentence starts.” Of course, the White House is rejecting the counsel’s conclusion.

This is an administration of brazen liars, and they won’t get any less brazen or mendacious with Sanders’s departure. She’s told friends she’s interested in becoming governor of Arkansas, as her father did. That’s bad news for the people of Arkansas—they deserve a governor who’s good at honesty—but at least her toxicity will be confined to one state.