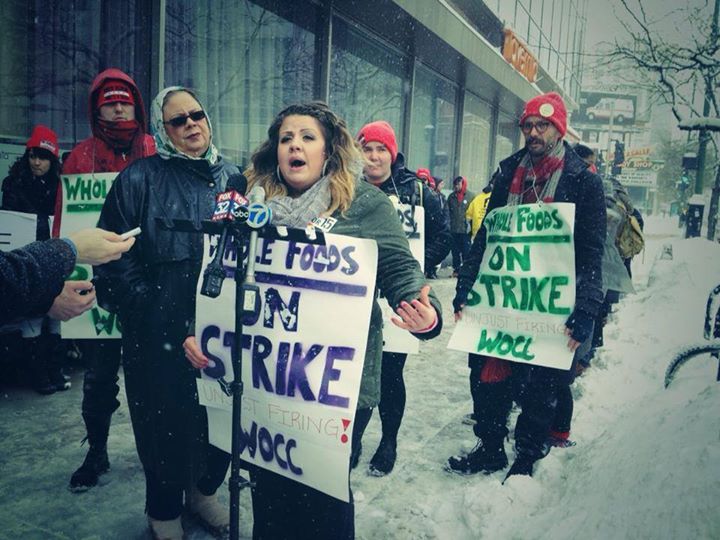 The cold this winter isn’t just extreme—it’s expensive. It means higher heating bills, more spending on car repairs and more taxpayer money going to city services. For many people, it means lost pay. And for some, the cost is their job.

Ask Rhiannon Broschat. On January 28, when Chicago Public Schools recognized that the extreme cold was dangerous for children, they closed the schools. Rhiannon’s special-needs child couldn’t stay home alone, and her back-up care provider, her mother, isn’t available during the week. For being a good mother and following the advice of public health officials, Rhiannon Broschat found herself fired by her employer, Whole Foods.

Like a lot of employers, Whole Foods assigns points for unexcused absences. Because other employees made their way into work, the company did not consider the weather situation serious enough to count in the “excused absence” category.

“If I can’t walk my dog, I don’t think my kid should be outside either,” Rhiannon told me, agreeing with the decision to close schools that day. “If I could have found adequate childcare, I would have made it to work. I need my money. They try to play it like I was lazy.”

The story of the cold weather has been all over the media for months, but this is one question reporters haven’t been asking: What do parents of young children do when schools close because of snow or cold?

Some cities have found a common-sense solution. Ordinances guaranteeing that workers can earn paid sick days are starting to include language that allows workers to use those sick days when schools are closed for public health purposes. Everyone benefits from these laws—families already on the brink have more money to spend, which helps boost the economy, and businesses don’t have to pay to hire and train a new employee.

Unfortunately, I can count on my two hands the number of cities and the one state that currently guarantee workers can earn paid sick days. Rhiannon Broschat’s situation is not uncommon.

“I know tons of people around the country and within my former company are going through the same thing,” Rhiannon said. “I would love to see this changed—rescind this policy or pass a regulation like paid sick days. Everybody should have those, especially if you have children.”

Rhiannon is a junior in college majoring in criminal justice. One of her biggest worries is whether she can afford to stay in school, and whether she’ll be able to pay off her student loans once she finishes.

“Things were already tight—this will make it tighter,” she said, “with the rising cost of housing, utility bills, gas for the car, and car maintenance living in Chicago—I just fixed my car the day before I was fired. Things happen, they all cost money.” Her goal is to get a job in juvenile probation. “I know a lot of kids out there are in difficult situations—that circles back to the situation I’m having,” she said. “Parents can’t help what goes on. They lose their jobs, and kids are the ones who have to suffer.”

Rhiannon’s story reminded me of my former co-worker Teresa. She described a similar experience on a day when schools were closed because of sub-zero weather here in Milwaukee. Because of our organization’s personnel policy, she was able to stay home with her kids. At 6:30 that morning, a woman she recognized but did not know from her neighborhood knocked at her door holding the hand of a 5-year-old boy.

She asked whether Teresa was staying home that day, and then said, “You look like a nice person. Will you watch my son? I’ll be fired if I don’t go in.” The lack of paid time off puts many working parents in desperate situations.

All over the country, parents are losing jobs or vital income because of conflicting orders: public health officials instructing parents to keep kids home, and bosses threatening to fire workers who don’t come in. No one should be out in the cold for being a good parent. Sign this petition to demand justice for Rhiannon Broschat. And in addition to justice for Rhiannon, we need justice for all workers. Join with us to pass flexible sick days policies locally and for the whole nation.