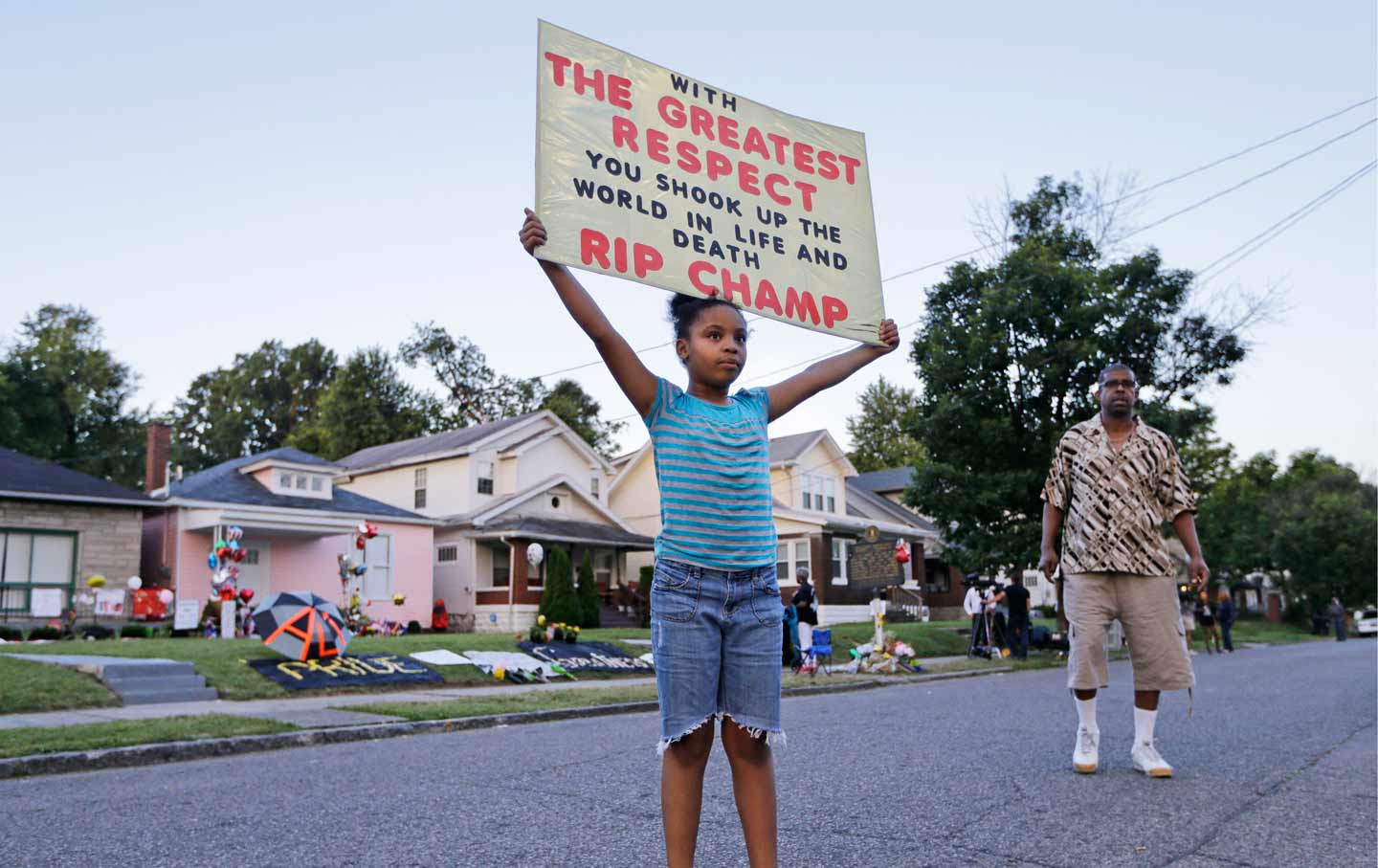 This article was written on Saturday June 11, the day after the funeral of Muhammad Ali. In the wake of the Orlando shootings, I almost asked my editors at The Nation to throw this piece away. But I really do believe that the most appropriate tribute to Muhammad Ali’s life and legacy I could offer would be to tell this story of people coming together in love and solidarity to say farewell to The Champ amidst this tragic and frightening political climate. Ali’s funeral was truly his last act of resistance.

As she said goodbye to her husband of thirty years in front of family, friends, 22,000 people at KFC Yum! Stadium, and the world, Yolanda Ali spoke the following truth: “The rich and powerful were drawn to Muhammad Ali, but he was drawn to the poor and forgotten.”

There was no greater evidence of this than his final send-off. While presidents, celebrities, and heads of state arrived in Louisville to pay their respects, the last event was explicitly for the masses. One hundred thousand people lined the streets. Balloons were released into the sky. Hand-picked bouquets of flowers were thrown upon his car as it made a 23 mile journey through the city. People like myself who were too young to have ever seen him fight were finally able to fulfill the dream of chanting his name at the top of our lungs. A school bus full of children passed his open, interfaith service as they joyously shouted the famous phrase from the Rumble in the Jungle, “Ali Bomaye.”

I spoke to many on this emotionally overwhelming day who made what they described as a “pilgrimage” to say their goodbyes. Seventy-two-year-old Bill Kimble traveled from Scotland, saying in a thick brogue, “There is no one else in America whom I would have come all this way to say my last goodbyes. I used to box—a local hero—and I hated war and when Ali said ‘no’ to war in Vietnam, I went to the gym and said, ‘You don’t have to stand with me, but you can stand with the Champ.’ He made me feel brave, like I had a lion’s heart.”

But the people who made the greatest impression upon me were from Louisville. Dedrick Hough, a young man in his twenties, was one of the people who staked some ground on Broadway to pay his respects. “I came out today for Ali,” he said to me. “The Greatest. He really inspired my life and my whole city. If you are from here, it’s known that it’s really hard to make it out. People got the whole slave mentality. Muhammad Ali set that ‘freedom example’ for a lot of people. Coming from Louisville, he gave me hope. He gave me dreams. He gave me ambition just to try to make it out and I’m still trying. Muhammad Ali I love you. Sleep easy, my brother.”

If there was one thing I have learned since Ali’s passing—and this was heard repeatedly throughout the day—it is that he had the capacity to make an unforgettable impression on just about everyone he met. He was not an abstract celebrity to many who were there out on the streets or at the interfaith service. He was real. Even if you interacted for merely a moment, he became a part of your life, an indelible memory. Will Smith, who played Ali in the 2001 film of the same name, told a story in Louisville about The Champ insisting on taking the bus and dragging Smith along. The young actor did not want to be mobbed by fans but Ali touched Smith’s hand and, in what by then was his quiet, halting speech, said, “You gotta let the people know that you’re real.”

He was “real” to Laura Jenson, who met Ali 25 years earlier when she was an office manager in New York City, Ali was supposed to arrive in the corporate suites to discuss a possible book deal and Laura was responsible for making sure that the Champ made it from reception to the conference room on the 50th floor. The only problem was that Ali was nowhere to be found. “He was late. We didn’t know where he was and everyone was getting a little miffed,” Laura said. “Then a call came up from the mailroom in the basement and they said, ‘You gotta come down here.’ Ali was holding court. Doing magic tricks. What happened was one of the mail room people had their kid in the basement. Ali was doing his magic with a big group all around him, a mischievous smile…We had VIPs come through all the time. We’d never seen anything like it.”

Later this week, I may write about the funeral service itself, which included rousing, radical, and cathartic words from Rabbi Michael Lerner and a speech that will be studied by black history scholars by Malcolm X’s daughter Attalah Shabazz. But this column is just an opportunity to say goodbye. As his daughter Hana tweeted.

We just left the funeral home and are in the car now following our beautiful father en route to his final resting place, as his reoccurring dream is realized. When he was younger, he said, “I used to dream that I was running down Broadway in downtown Louisville, Kentucky and all of the people were gathered in the street waving at me and clapping and cheering my name. I waved back, then all of a sudden I just took off flying. I DREAMED THAT DREAM ALL THE TIME…”

The greatness of Ali is that he paid this dream forward. His courage allowed people to also imagine that they could fly. Billy Crystal, in a beautifully understated eulogy, simply asked the question: “Didn’t he make all of our lives a little bit better than they were?”

I can only answer that for myself: You better believe it. Sleep easy, champ.