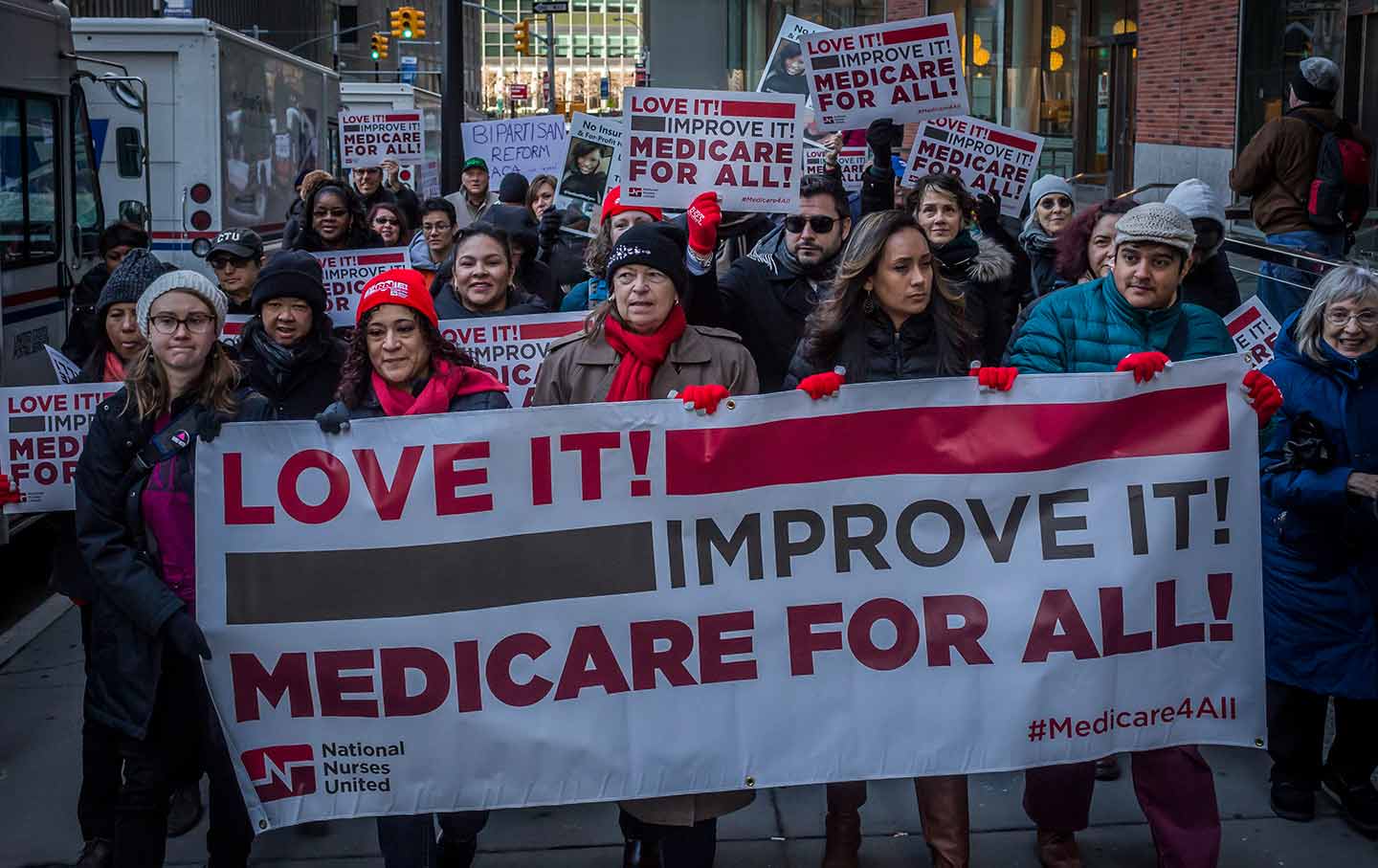 Health and Human Services Secretary Tom Price and House Speaker Paul Ryan, the Dr. Jekyll and Mr. Hyde of Donald Trump’s Washington, keep cobbling together new schemes for repealing and replacing the Affordable Care Act—with huge tax cuts for the rich and a lot less care for everyone else. But even with the White House and Congress under Republican control, shredding what remains of the health-care safety net has no appeal beyond the counting rooms of Wall Street.1

The ACA is just OK. It provides some protections, and they are important. But Americans are still stuck with a health-care system that makes them put off routine care because of exorbitant deductibles, that makes major illness not just a physical catastrophe but a financial nightmare, and that rations care in order to boost corporate profits. As the National Nurses United union notes, “Despite ACA restrictions on insurance abuses, insurers continue to find ways to discriminate against the sick, for example, tailoring benefit packages and provider networks to discourage high cost patients from choosing or remaining in their plans, and limiting network choices to exclude providers that specialize in critical services such as cancer care.”4

Americans recognize what’s wrong—even if most politicians in Washington do not. “According to a Gallup poll last year (and a similar Kaiser survey), more than half of Americans wanted to repeal the ACA, and most Americans still have a dim view of the law. They know it is not working. They know the deductibles are too high and they can’t afford the co-payments. (Curiously, on the eve of its repeal, a growing number of Americans say they support the law.)” explains Dr. Claudia Fegan, who serves as the national coordinator of Physicians for a National Health Program. “But the Gallup poll also showed that 58 percent of Americans—including 41 percent of Republicans and 53 percent of those who favored repeal—wanted the ACA replaced with ‘a federally funded health care program providing insurance for all Americans,’ in other words, single-payer reform. They want a plan that covers the care they need and lets them see the providers they choose with no out-of-pocket costs.”6

The Republican plans are ridiculous. But too many Democrats are too cautious. America needs real health care reform.

Bernie Sanders has the right response. Arguing that “our job is to improve the Affordable Care Act, not repeal it. Our job is to guarantee health care to all people as a right, not a privilege,” Sanders says, “We have got to have the guts to take on the insurance companies and the drug companies and move forward to a Medicare for All single-payer program.”7

Sanders gets it, but there are still plenty of DC Democrats who don’t. And even if Democrats had their act together, the partisan balance is against them.8

It’s different in states where Democrats are in charge. Meaningful reforms usually get their start at the state level in the US—and at the state or provincial levels in other countries. Canada, for instance, started its long march toward its highly successful national health-care program with a first step by democratic socialist Tommy Douglas and the Cooperative Commonwealth Federation government that swept to power in Saskatchewan in 1944.9

California could be America’s Saskatchewan if groundbreaking legislation continues to advance through the legislature. Urged on by the California Nurses Association/National Nurses United and the Healthy California Campaign, the California state Senate Health Committee on Wednesday approved legislation to “guarantee health care for all California residents with comprehensive health services and an end to out of control co-pays and deductibles.”11

A thousand CNA/NNU nurses and their allies rallied in Sacramento on Wednesday to promote passage of the Healthy California Act, and CNA executive director RoseAnn DeMoro said they were key to approval of the bill by the Health Committee, and to its future advancement. “The most important thing today was the breadth and depth of support by the dozens of people lining up to back the bill, representing 250 organizations across the state,” DeMoro explained. “These are organizers who are going to be with us to make the Healthy California Act the law of the land in California.”14

Those organizers describe the Healthy California Act as “a national model for how all states can act to address the ongoing emergency of individuals and families threatened by high out of pocket costs, inadequate access to coverage, and restrictive insurance networks.”15

The nurses are right. “Medicare for All” is not an alternative—it’s the only answer that makes sense.18