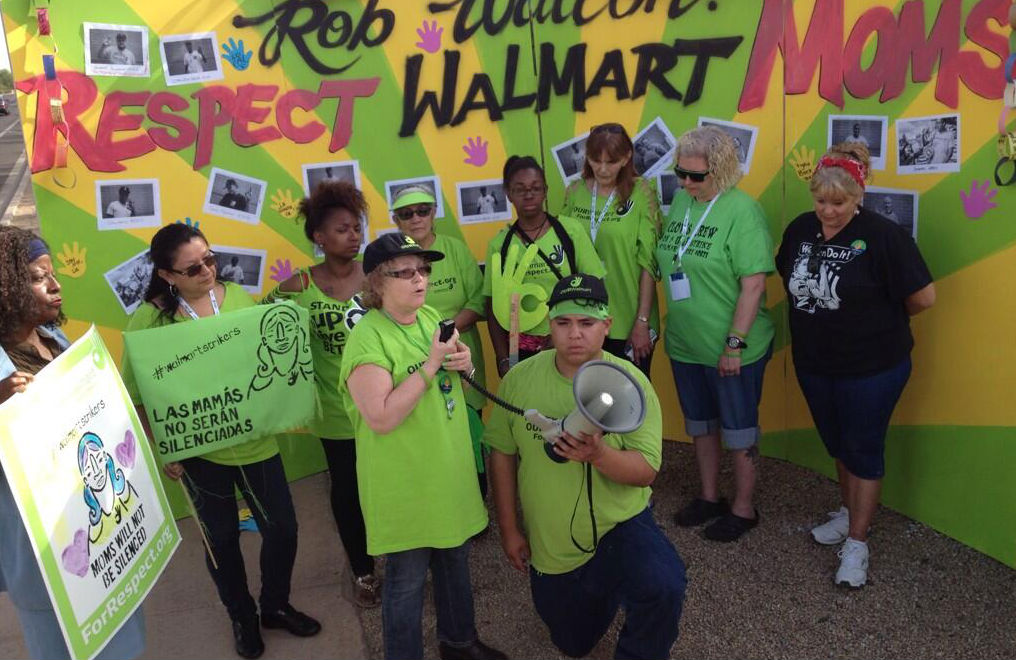 Lashanda Myrick, a Colorado mother of two, came to Walmart last year seeking a steady job that would help her provide for her children. Instead, she got a job that made it harder to be a mom. When she drops her young daughter off at night at her mother’s house so she can work the overnight shift stocking shelves, she thinks about how her irregular work schedule disrupts her parenting schedule.

“It’s hard not to be able to tuck her in. And it hurts me that my child can’t sleep in her own bed at night. And there’s nothing I can do,” she said at a press conference earlier this week organized by the labor coalition OUR Walmart. “It breaks my heart … because I really have no choice.”

Myrick’s experiences illustrate the ugly duality of the Walmart economy: while consumers enjoy low prices and unlimited selection, workers get low wages and impossible choices. Family versus work, a poverty wage or no job at all.

A new report from the left-leaning think tank Demos reveals the structures of inequality that keep women like Myrick at the lowest rungs of the Big Box retail labor force. Today, researchers found, roughly 1.3 million women working retail jobs live in or near poverty; a typical woman salesperson earns just $10.58 an hour. On top of utterly low wages, women in retail, including many family breadwinners, face a stunning gender gap, typically earning only 72 cents for every dollar earned by male counterparts. That’s a cumulative annual wage deficit of $40.8 billion, equivalent to $381 billion in “lost wages” for women by 2022.

The losses run deeper than their paycheck. Workers skip doctor’s visits because they lack paid leave time and scrimp on groceries to pay the bills. With just 5 percent of retail workers granted paid parental leave, new parents are pressured to rush back to work, potentially jeopardizing their newborn’s health. These day-to-day hardships tax public resources, too, as working-poor families absorb public funds in the form of food stamps, Medicaid and other public assistance programs.

The structural impoverishment is compounded by chaotic, unstable schedules. As we’ve reported before, retail work often puts workers “on call,” with irregular hours that vary weekly or daily.

Meanwhile, the retail sector is expanding rapidly, sucking more workers into the low-wage workforce as middle-income jobs evaporate in the hobbling economic “recovery.”

The lack of job security and union representation deters workers from agitating for better pay and working conditions, perpetuating a cycle of instability and impoverishment in a constantly churning workforce.

But Demos suggests an elegant strategy for addressing multiple inequities at once: a cross-the-board wage hike at large retailers (with 1,000 or more employees). According to the report, raising hourly pay to a level equivalent to $25,000 per year for a full-time worker—about $12.25 an hour—would help close the gender wage gap and lift the poorest workers out of poverty, with trickle-up benefits for the whole labor force:

An estimated 437,000 working women will move out of poverty or near poverty once their wages increase to the new minimum. Family members, too, will benefit from the raise. In all, 371,000 female workers and their family members will leave the ranks of the impoverished. Another 517,000 will rise above the near poverty cutoff. A mandatory wage hike would be no “job killer,” either. Demos projects that the guaranteed income would actually be an economic boon. More money in low-income workers’ pockets would stimulate consumer spending, boost sales and ultimately add about 105,000 to 136,000 jobs to the workforce. The projected boost to the GDP would range from $12.1 billion to $15.7 billion, the majority generated by women workers.

Relative to the industry’s soaring profits, the additional labor costs would come pretty cheap. The proposed base wage would require a $21.5 billion investment, which represents some 4 percent of the industry’s total 2012 payroll. The effect on retail prices is hard to predict, but even if bosses passed half of those costs on to shoppers, a typical family would pay less than $18 extra over the course of a year—a negligible surcharge for a measure that could help narrow structural income and gender gaps.

Still, $25,000 is not a magic number. Rather, the analysis is framed around a benchmark salary cited by Walmart worker advocates, who note, with outrage, that most of the company’s workers earn less. The proposed hourly pay of $12.25 falls below wage demands put forward by other activists—particularly the $15-per-hour demanded by the fast-food workers’ movement, the citywide campaign that pushed through a $15 wage floor in Seattle, and similar initiatives emerging in other cities.

Aside from a pay raise, women working part-time, who make up an estimated 44 percent of the retail workforce, need an even greater boost to attain a sustainable livelihood. Nearly one in three of those women want full-time work, according to researchers. And even workers who are classified as full-time often see their earnings undermined when their hours are cut back, because under the erratic “just in time” scheduling system, their hours vary wildly depending on fluctuations in inventory.

So Demos advocates a $12.25 hourly base wage for both full-time and part-time workers. Moreover, to improve overall working conditions, the report urges big retailers to give “involuntary” part-timers more hours, while instituting fairer scheduling practices. Workers should, for example, be informed about their schedules weeks in advance, instead of just days, or be guaranteed a certain number of hours per week, or alternately, a basic weekly pay level, regardless of hours worked.

According to Demos policy analyst Amy Traub, mega-retailers could afford to offer both more hours and more pay, particularly with the added knock-on effects of the elevated wage levels in terms of increased sales. “This is not a poor industry,” Traub says, and given the potential business gains from a better-compensated workforce, “A raise for employees and improving scheduling would be an investment in human capital for these companies.”

Myrick has a different investment in mind, as she goes on strike today as part of the nationwide “Walmart Moms” campaign. “Many times I have to choose between getting shoes for my daughter or my son,” she recalled, “and that’s no choice that a parent should have to make.” As she struggles to balance her work and family needs, a modest raise won’t fix everything, but it might spare her at least one impossible choice.