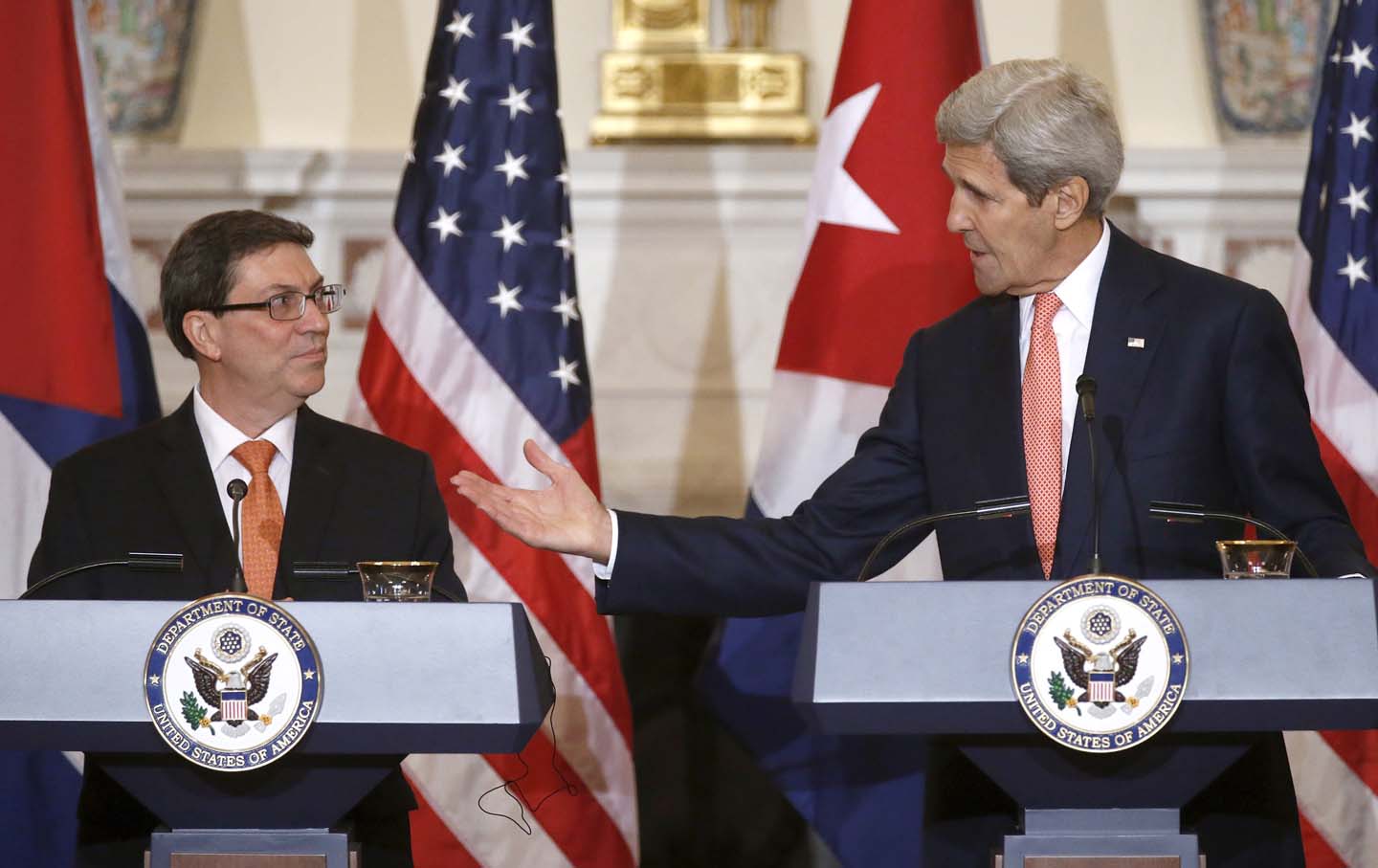 In 1917, the Cuban government of General Mario Garcia Menocal commissioned construction of a regal mansion on upper 16th Street in Washington, DC, to house the Embassy of Cuba. It was that building President Eisenhower closed down on January 3, 1961, when he broke diplomatic relations with Fidel Castro’s Cuba amidst the CIA’s secret preparations for the Bay of Pigs invasion. The Swiss took custody of the building until the summer of 1977, when Jimmy Carter’s efforts to improve relations led to the establishment of semi-embassies known as “Interests Sections” in both Washington and Havana. For 38 years, the plaque on the front wall of the building read “Seccion de Los Intereses de Cuba”—the Cuban Interests Section.

At 10:35 am on July 20, Cuban authorities unveiled a new plaque that reads “Embajada de La Republica de Cuba.” A three-man honor guard then slowly hoisted the red, white, and blue flag of the Republic of Cuba to the top of a newly constructed flagpole—officially inaugurating the resurrection of the Cuban Embassy and the restoration of US-Cuban diplomatic relations. A promising new era now begins.

Among the 500 or so dignitaries and guests watching in the blazing morning sun stood Wayne Smith, a former diplomat who had been posted at the US Embassy in Havana when President Eisenhower broke relations 54 years earlier. Now 83, Smith has spent most of his life working to bring Washington and Havana back together. “What a great day,” Smith told The Nation, his face red with emotion. He proclaimed himself “ecstatic” at the ceremonial normalization of relations with Cuba.

The ceremony was conducted in a solemn, respectful way—replete with a sound system playing both the Cuban and US national anthems. But it was a jubilant, almost giddy crowd that witnessed the making of US foreign-policy history. Attendees included a large delegation of Cuban luminaries, US senators and representatives, Latin American ambassadors, Cuban-American businessmen, policy activists and analysts, artists, and actors, among them Danny Glover, long associated with Cuban causes. Too many people to count murmured, “This is historic” as the flag slid up and began to blow in the wind. “I am thrilled,” exclaimed Congresswoman Kathy Castor, who represents Tampa, Florida, and has dedicated her office to getting the trade embargo lifted. That needs to happen, she said, and will when “community activists, policy advocates, and church group educate enough members of Congress to understand that their constituents are ready to move on the issue of Cuba.”

Cuban foreign minister Bruno Rodriguez, who presided over the re-inauguration of the Embassy, made the similar point. In his speech to an audience packed into the Embassy’s sweltering second-floor ballroom, he noted that Fidel Castro had stood in that very room during his famous trip to Washington in April 1959 to promote positive ties with his fledgling revolutionary government. The re-opening of the Embassy as part of an effort to normalize relations, Rodriguez said, only “made sense” if the United States followed through on addressing key issues that continue to render them abnormal, such as the Guantánamo naval base, and the economic embargo. With less-than-subtle diplomatic aplomb, Cuba’s foreign minister also warned that better relations should not be misconstrued as an opportunity for “interference in our sovereign affairs.” But, he noted, Cuba was encouraged by the tone and demeanor with which Washington was continuing to address bilateral relations with Havana.

In yet another manifestation of momentum toward normalcy, Rodriguez then departed for the State Department to hold the first official meeting between a Cuban foreign minister and US secretary of state since 1958. At their press conference, Kerry spoke passable Spanish: “The United States welcomes the new beginning of its relations with the people of the government of Cuba,” he said, using language that resonates in Cuba. “We are determined to live as good neighbors on the basis of mutual respect.”

Both nations, he suggested, “are better served by engagement than by estrangement.”

Kerry also announced he would travel to Cuba on August 14, to preside over a similar ceremony of lofting the US flag at newly reconstituted US Embassy which sits along Havana’s famous seaside drive known at the Malecon. That trip—Kerry will become the highest-ranking US official to visit the island since the revolution—will generate widespread international media coverage, along with alluring visual imagery, contributing immeasurably to the rapid and positive changes in US-Cuban relations.

But rumors are beginning to swirl in Washington that Kerry’s trip will have an additional purpose—to lay the groundwork for an even more important potential visitor—the president of the United States. Obama has made no secret that he is interested in having his Nixon-in-China moment in the Caribbean. At a press event last May, a White House spokesman noted that “there’s one person in particular that hopes President Obama will be in Havana at some point in relatively near future and that’s President Obama himself. I know that he would relish the opportunity to visit the island of Cuba.”

If and when Obama becomes the first sitting president to go to Cuba, he will not only consolidate his dramatic efforts to change Cuba policy; he will seal his legacy as the president who made dialogue and engagement the successful cornerstone of the way Washington engages the world.