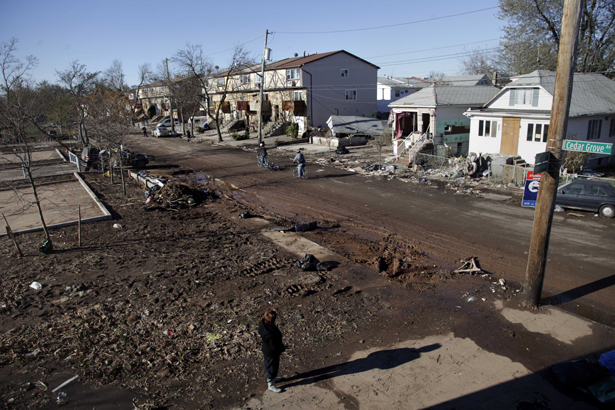 Bill de Blasio, who has promised aggressively activist government when it comes to early childhood education, reducing traffic fatalities and constructing subsidized housing, was this week asked to take on a role that might be too ambitious even for the mayor’s taste: becoming a buyer of last resort for Staten Island homeowners who’d rather move out than build back after superstorm Sandy.

At an event on the island on Monday where the mayor discussed the city’s lagging rebuilding efforts (a report released that day found that the Bloomberg administration’s recovery program had not completed a single renovation), the borough president of Staten Island, James Oddo, pressed in both a private meeting with the mayor and at a subsequent press conference for an “acquisition for redevelopment” program.

De Blasio didn’t commit to the program—or much of anything—on Monday, promising only that his administration’s recovery plan would come out soon. It will be interesting to see how de Blasio plays Oddo’s request, which offers big risks along with potentially significant upsides.

Oddo for months has been calling for an acquisition initiative—inspired, he says, by a visit to New Orleans, where he learned about the Louisiana Land Trust. After the federal levee failure and flood in 2005, the Trust purchased thousands of parcels and distributed them to neighboring property owners and developers. The borough president’s plan, the scope and specifics of which remain to be determined, would differ from Governor Andrew Cuomo’s federally funded NY Rising program, which has bought up hundreds of parcels that were clearly no longer inhabitable with the goal of returning them to nature—forever. Two sections of Staten Island are part of the Cuomo program.

In other areas near the water and not covered by the Cuomo initiative, Oddo wants the city to cut a check to homeowners who can’t afford to elevate their homes or don’t want to wait for the money to come through to do so. Then the city would bundle the properties and use a request-for-proposals process to develop them. “To me it’s the best of all worlds,” Oddo tells City Limits. “We give people a chance to start their lives over [and] it gives government a chance to step back and develop these properties the right way.”

Apart from a single acquisition in October from a woman who had suffered a uniquely horrible personal tragedy in the storm, the Bloomberg team showed no interest in bailing out homeowners. “They were going to go in and go house by house and try to elevate each home,” Oddo says. “To me, that wasn’t visionary. That wasn’t transformative. That didn’t take all this pain and all this loss of life and didn’t honor that.” By gathering small parcels together, Oddo argues, developers could take advantage of economies of scale and create more sustainable, weather-ready housing. He doesn’t know how he’d structure eligibility, and is calling for the city to survey residents, determine the level of interest and and then decide what it can afford to offer.

The downsides of the beep’s idea are pretty clear. At least temporarily, the city would be responsible for the upkeep of acres and acres of territory. Throwing open the exit door could destabilize neighborhoods. Depending on where the eligibility lines are drawn, some homeowners will feel left out. A burdensome precedent might be set for future disasters. The auction could be a windfall for developers, and could squeeze out homeowners and renters who want to hang on. And of course, there’s the question of where the money would come from—though it’s possible federal funds could be used (the state’s original plan for spending that money did leave open the possibility that some property might be bought and rebuilt).

But the idea could braid together help for distressed homeowners, a way to more efficiently make New York more storm proof, a chance to rationalize development in the city’s fastest-growing borough and—perhaps—even a boost to de Blasio’s affordable housing plans. In a blatantly political move, Bloomberg in his first term downzoned much of Staten Island, which assuaged local fears of over-development but basically eliminated the possibility of constructing new affordable housing in the area.

Oddo doesn’t want to increase density much, and given the limited mass transit the area probably couldn’t absorb too many newcomers, but the prospect of buyouts might just be the leverage the mayor needs to get Staten Island to accept some smart growth. In the 1980s the city built and preserved hundreds of thousands of units of affordable housing using its stock of tax-foreclosed properties. The dwindling supply of such land has been a challenge to affordable housing development in the past decade. This program could give the city at least a little more land to play with.

Susannah Dyen, the policy coordinator at the Alliance for a Just Rebuilding, notes that on some of the parcels Oddo is talking about there were, before Sandy, “a ton of basement and accessory dwelling units that were very affordable.” Oddo himself notes that the neighborhoods have long provided housing affordable to the middle class.

Dyen is reserving judgement on Oddo’s idea, for now. “It depends a lot on what gets redeveloped. Overall the buildings that did the best in the storm were the newer buildings, so the idea of building new in these areas make sense,” Dyen says. But new construction is often the least affordable housing. “If there are affordability requirements that are including in that rebuilding, that would make a big difference.”