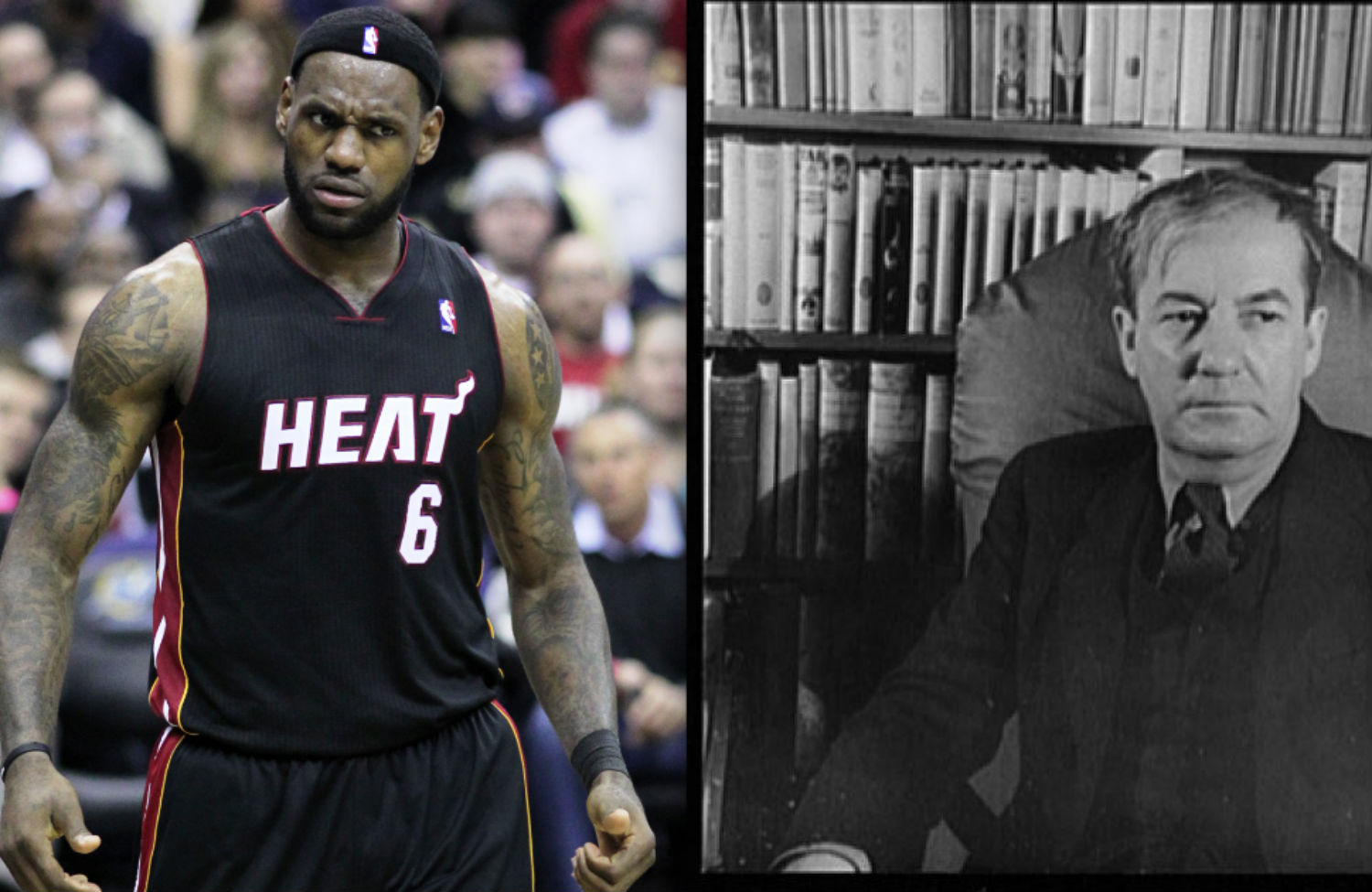 Clever, indeed, LeBron James’s purchase of a round-trip ticket when he took his talents to South Beach in the summer of 2010. Everyone knows it is the most efficient way to travel.

But does he have something to read for the flight?

Southbound, sources tell The Nation, James was spotted with a well-thumbed copy of Thomas Wolfe’s You Can’t Go Home Again.

But northbound now, what will James (and his talents) read?

The Nation humbly submits that James could do worse than Wolfe’s predecessor, Sherwood Anderson, native and bard of the state of Ohio. Anderson’s most well-known work is Winesburg, Ohio, but more apropos, more to the point, perhaps, would be an essay Anderson published in the August 9, 1922, issue of The Nation, titled, “I’ll Say We’ve Done Well.”

From 1922 to 1925, The Nation published a series of essays called “These United States,” with contributions from some of the most prominent writers of the day: Willa Cather, Theodore Dreiser, W.E.B. Du Bois, Sinclair Lewis, H.L. Mencken, Edmund Wilson. (We have written previously on this blog about the essay on California.) Sherwood Anderson’s essay on Ohio is easily one of the best.

“In Northeast Ohio, nothing is given. Everything is earned. You work for what you have,” James declares in his Sports Illustrated announcement.

In the essay excerpted below, Sherwood Anderson, though from the western part of the state, arrives at a similar conclusion about Ohio. He does so, however, through somewhat more roundabout, sarcastic reasoning.

I am compelled to write of the State of Ohio reminiscently and from flashing impressions I got during these last ten years, although I was born there, my young manhood was spent within its borders, and later I went back and spent another five or six years as a manufacturer in the State. And so I have always thought of myself as an Ohioan and no doubt shall always remain, inside myself, an Ohioan.

Very well, then, it is my State and there are a thousand things within it I love and as many things I do not much like at all….

Ohio is a big state. It is strong. It is the State of Harding and McKinley…. And now Ohio has got very big and very strong and its Youngstown, Cincinatti, Akron, Cleveland, Toledo, and perhaps a dozen other prosperous industrial cities can put themselves forward as being as ugly, as noisy, as dirty, and as mean in their civic spirit as any American industrial cities anywhere. “Come you men of ‘these States,’” as old Walt Whitman was so fond of saying, in his windier moods, trot out your cities. Have you a city that smells worse than Akron, that is a worse junk-heap of ugliness than Youngstown, that is more smugly self-satisfied than Cleveland, or that has missed an unbelievably great opportunity to be one of the lovely cities of the world as has the city of Cincinnati? I’ll warrant you have not. In this modern pushing American civilization of ours you other States have nothing on Ohio. Credit where credit is due, citizens. I claim that we Ohio men have taken as lovely a land as ever lay outdoors and that we have, in our towns and cities, put the old stamp of ourselves on it for keeps.

Of course, you understand, that to do this we have had to work….

To be sure, the job isn’t all done yet. There are lots of places where you can still see the green hills and every once in a while a citizen of a city like Cleveland, for example, gets a kind of accidental glimpse at the lake, but even in a big town like Chicago, where they have a lot of money and a large police force, a thing like that will happen now and then. You can’t do everything all at once. But things are getting better all the time. A little more push, a little more old zip and go, and a man over in Ohio can lead a decent life.

He can get up in the morning and go through a street where all the houses are nicely blacked up with coal soot, and into a factory where all he has to do all day long is to drill a hole in a piece of iron….Nowadays all you have to do, if you live in an up-to-date Ohio town, is to make, say, twenty-three million holes in pieces of iron, all just alike, in a lifetime. Isn’t that fine? And a night a fellow can go home thanking God, and he can walk right past the finest cinder piles and places where they dump old tin cans and everything without paying a cent….