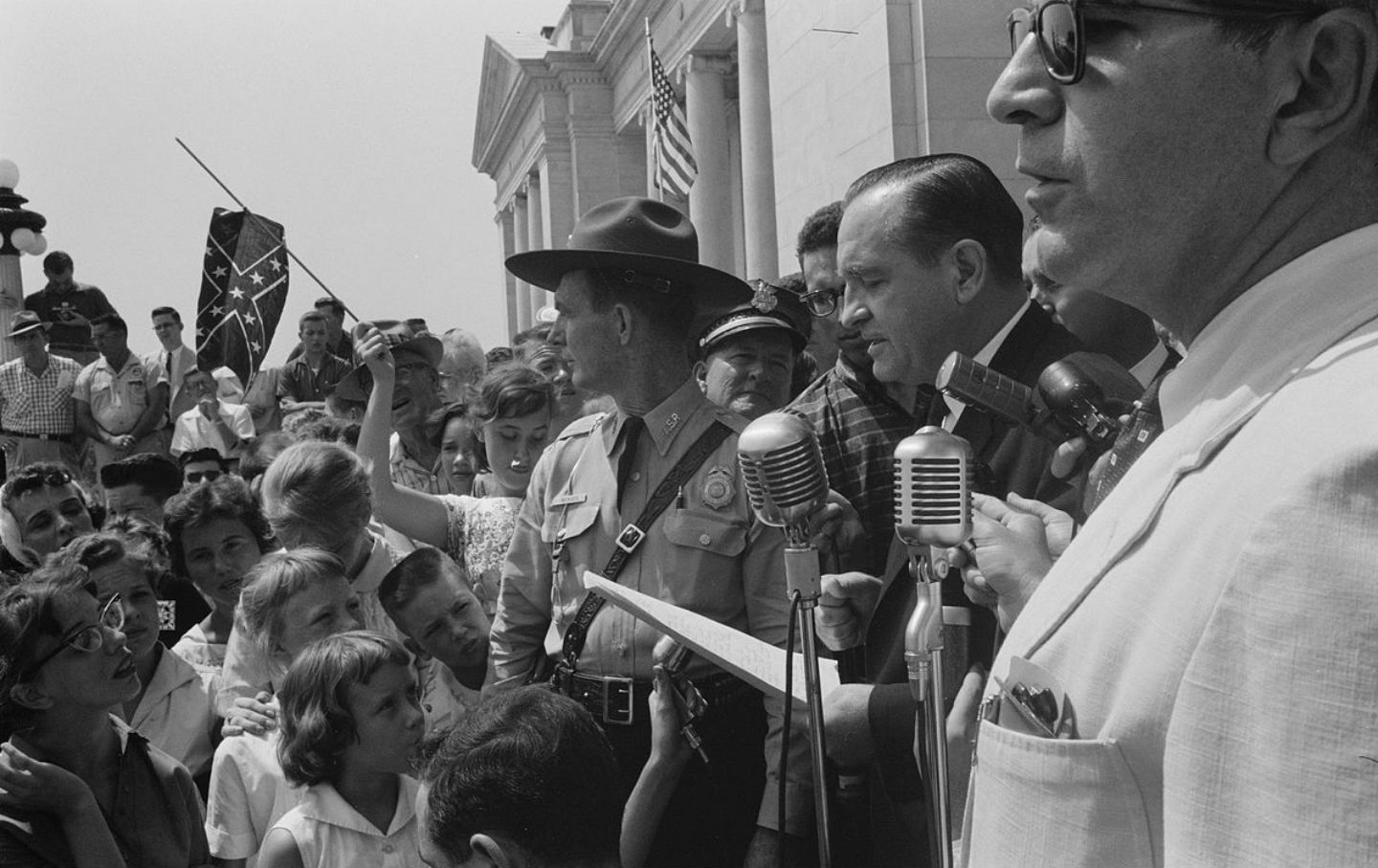 Governor Faubus (center) speaking at an anti-integration rally in Arkansas in 1959, a woman holding up a Confederate flag stands in the background. (Library of Congress)

On this date in 1958 Governor Orval Faubus of Arkansas summoned the state’s National Guard troops to block court-mandated integration of the city’s public schools. The action led to a bitter standoff with the federal government. President Dwight D. Eisenhower ordered the 101st Airborne to Little Rock to escort black students to school, and deputized the entire Arkansas National Guard. The students were eventually enrolled at the school by the end of September, but before that happened, The Nation published an appraisal of the “power showdown” in Little Rock, written by Robert McKay, later the dean of the NYU law school.

The day before classes were to begin the Governor made explicit his fears of violence—he spoke of “caravans” of segregationists converging on Little Rock and of Negro purchases of knives and called out the National Guard to “maintain order.” If any uncertainty remained as to the troops’ mission—preventing Negro enrollment—that doubt was dispelled when he said: “The inevitable conclusion is that the schools must be operated as they have in the past.”…

It is hardly surprising that a few days after Governor Faubus’ prediction of “violence, bloodshed and mob riots,” a disorderly crowd assembled at Little Rock’s Central High School. Such a prophecy, of course, tends to become self-fulfilling. The Governor’s prediction had the effect of a call to violence….

His use of troops to prevent enforcement of the court order thus makes irrelevant any discussion of the Governor’s “good faith” fear of disorder. He used the troops for what was necessarily an unlawful purpose—defeating the federal court order. To say the least, studied disregard of law is scarcely good-faith action in support of law. It seems clear then that the keeping of troops at any school, Little Rock or elsewhere, to prevent the enforcement of a federal court desegregation order in such circumstances is an interference with federal supremacy.…

State defiance of federal authority may not be tolerated. This would no longer be state sovereignty but state anarchy.