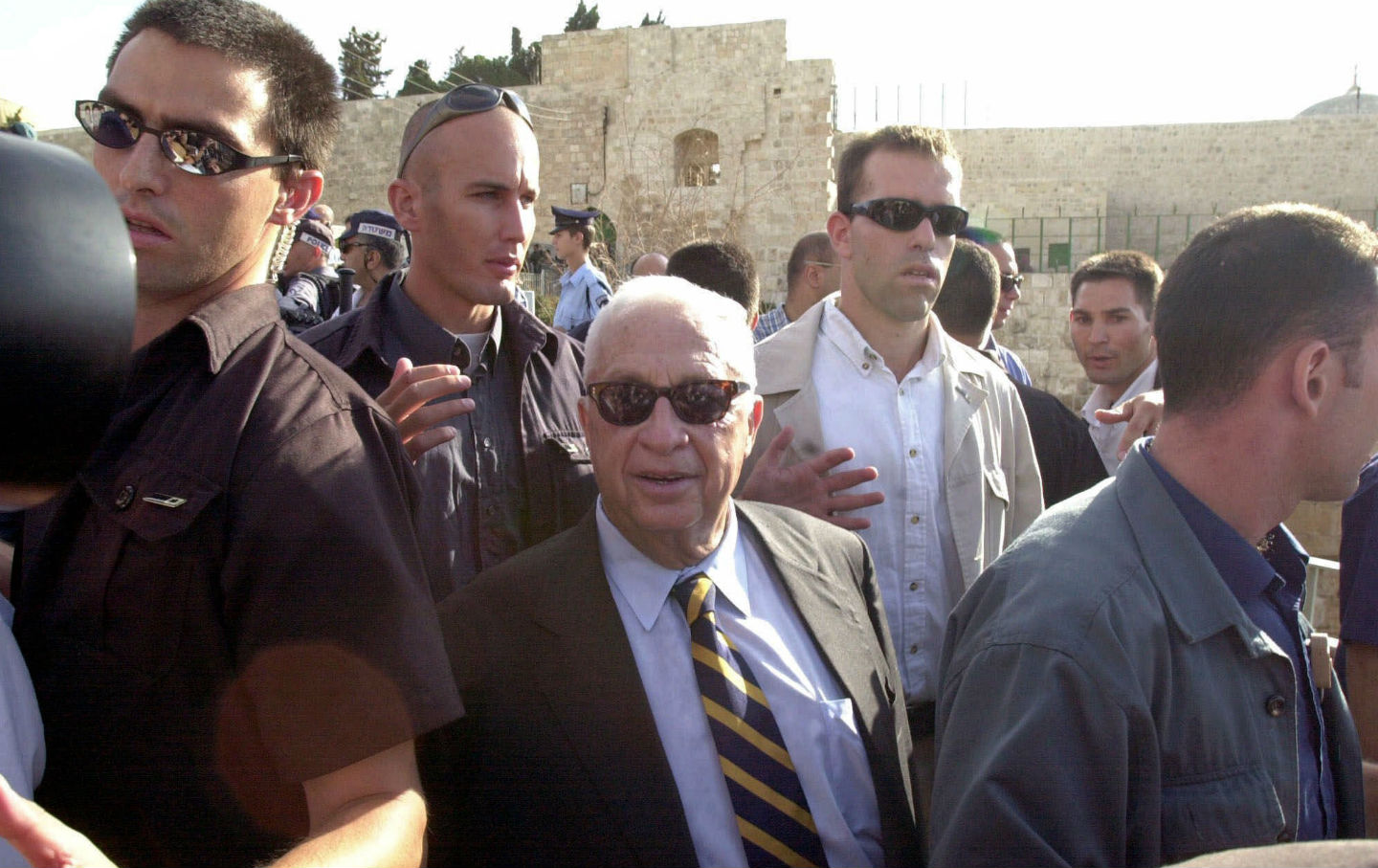 Ariel Sharon, center, flanked by his security guards as he leaves the Temple Mount compound on September 28, 2000. (AP Photo)

In a truly manful display of resolve on this day 15 years ago, the leader of the Israeli political opposition, Ariel Sharon, toured the Temple Mount in Jerusalem, surrounded by several hundred, and perhaps more than a thousand, armed riot police. The visit had the desired effect: After Sharon left the compound, Palestinian rioters began hurling stones and other projectiles in the direction of Jewish worshipers at the Western Wall. Rarely has it been more accurately said that hell broke loose of its restraints. At the end of October, Edward Said wrote a piece for The Nation surveying the situation.

Misreported and flawed from the start, the Oslo peace process has entered its terminal phase of violent confrontation, disproportionately massive Israeli repression, widespread Palestinian rebellion and great loss of lief, mainly Palestinian. Ariel Sharon’s September 28 visit to Haram al Sharif could not have occurred without [Prime Minister] Ehud Barak’s concurrence; how else could Sharon have appeared there with at least a thousand soldiers guarding him? Barak’s approval rating rose from 20 to 50 percent after the visit, and the stage seems set for a national unity government ready to be still more violent and repressive.…

An alternative peace plan and leadership is slowly emerging among leading Israeli, West Bank, Gaza and diaspora Palestinians, a thousand of whom have signed a set of declarations that have great popular support: no return to the Oslo framework; no compromise on the original UN Resolutions (242, 338 and 194) on the basis of which the Madrid Conference was convened in 1991; removal of all settlements and military roads; evacuation of all the territories annexed or occupied in 1967; boycott of Israeli goods and services. A new sense may actually be dawning that only a mass movement against Israeli apartheid (similar to South Africa’s) will work. Certainly it is wrong for Barak and Albright to hold Arafat responsible for what he no longer fully controls. Rather than dismiss the new framework being proposed, Israel’s supporters would be wise to remember that the question of Palestine concerns an entire people, not an aging and discredited leader. Besides, peace in Palestine/Israel can be made only between equals once the military occupation has ended. No Palestinian, not even Arafat, can really accept anything less.