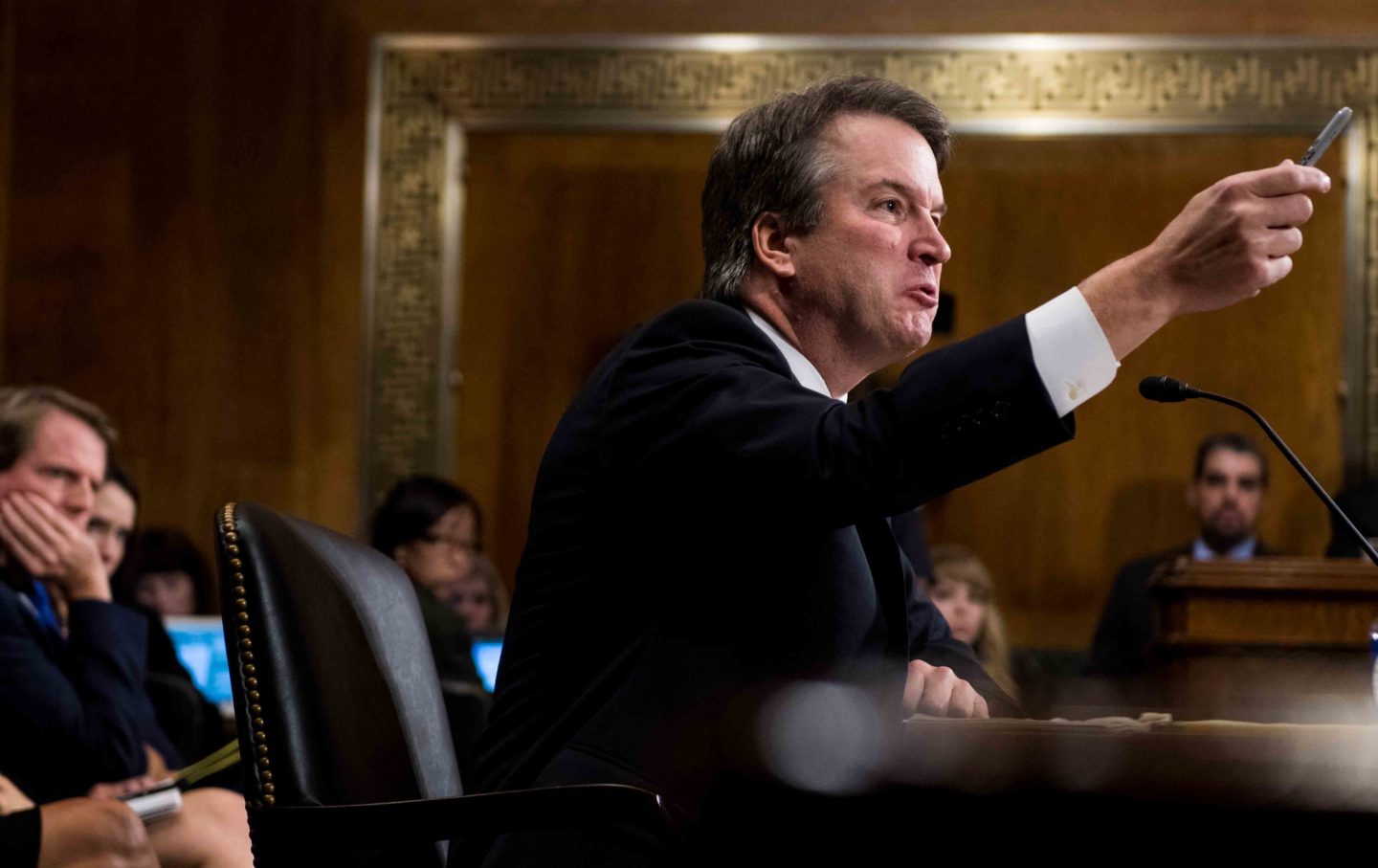 It is not possible to take seriously everything that Donald Trump’s nominee for the US Supreme Court says under oath—as this nominee has lied to the US Senate with such frequency that former Senate Judiciary Committee member Russ Feingold says, “Taking all his testimony together, we see a clear pattern emerge: Brett Kavanaugh has never appeared under oath before the U.S. Senate without lying.”

Yet some of what Kavanaugh has said should be taken seriously. Throughout his career, Kavanaugh has worked to pack the federal courts with partisan judicial activists—that was literally his job when he worked with Karl Rove as part of the Bush administration’s drive to politicize the courts. So when Kavanaugh expresses fury at “the left,” and rages against those Democrats who dare to challenge him, he can be trusted to mean what he says.

Kavanaugh displayed that fury in his reading of written remarks to the Judiciary Committee on Thursday, September 27, as he challenged the powerful testimony of Dr. Christine Blasey Ford. The Republican majority on the Judiciary Committee was for the most part unconcerned about sexual-abuse allegations that had been raised regarding the nominee or by his threatening performance; they voted unanimously on the morning after Kavanaugh’s rage exploded to formally endorse his nomination. On Friday, the overwhelming majority of Senate Republicans joined West Virginia Democrat Joe Manchin in casting 51 votes to advance Kavanaugh’s nomination, while the overwhelming majority of Senate Democrats joined Alaska Republican Lisa Murkowski to cast 49 votes against doing so. Friday’s decision sets the stage for one last debate and then a high-stakes confirmation vote sometime this weekend.

The senators who engage in these final deliberations, and the American people in whose name the senators will determine the fate of the Kavanaugh nomination, would do well to recognize why former Supreme Court Justice John Paul Stevens says this raging partisan is unfit to serve on the nation’s highest court.

“…what goes around comes around…” —Brett Kavanaugh

At the core of Brett Kavanaugh’s testimony to the Judiciary Committee during the extraordinary session on September 27 was a claim by the nominee that he is the victim of a coordinated attack by his liberal and progressive critics—including members of the Senate who propose and pass laws that are might be considered by the Supreme Court.

Kavanaugh went to great lengths to outline his belief that he has been uniquely targeted by liberal conspirators, asserting that they were “lying in wait” to unleash “a calculated and orchestrated political hit, fueled with apparent pent-up anger about President Trump and the 2016 election. Fear that has been unfairly stoked about my judicial record. Revenge on behalf of the Clintons and millions of dollars in money from outside left-wing opposition groups.”

Kavanaugh told the Senate that his critics on “the left” were determined “To blow me up and take me down.” Under oath, he delivered a warning to those who had dared to challenge him: “what goes around comes around.” The hard-right advocate for conservative judicial activism, who was demanding a lifetime sinecure on the highest court in the land, raged on about how “The consequences will extend long past my nomination. The consequences will be with us for decades.”

Those were chilling words from a nominee who could sit in judgement on the laws enacted by congresses that may be led by liberals, who could reject requests by progressive groups that constitutional protections be applied in a way that guarantees equal protection under law, and who could easily serve on the high court into the 2050s. California Senator Dianne Feinstein, who has served in the chamber for a quarter-century and considered nine Supreme Court nominations, explained at the opening of Friday’s debate about whether to confirm or reject Kavanaugh that “never before have we had a nominee display such flagrant partisanship and flagrant hostility at a hearing.” Senate minority leader Charles Schumer said that Kavanaugh had delivered “the bitterest partisan testimony I have ever heard” from a nominee for the bench or for a cabinet post.

Kavanaugh attempted on the eve of the Senate’s final deliberations on his nomination to ease fears stoked by his fierce and threatening testimony of a week earlier. In an opinion piece written for the rigorously conservative opinion section of Rupert Murdoch’s Wall Street Journal, he tried to argue that he really does understand that “an independent and impartial judiciary is essential to our constitutional republic.” But, even as he attempted to defend himself, Kavanaugh acknowledged that—while delivering a written statement and extensively rehearsed answers to questions from the Senate Judiciary Committee—he “might have been too emotional at times” and that he might have “said a few things I should not have said.”

In other words, even in the most serious of circumstances, even in formal settings where decisions are being made about the future of the courts and the country, Brett Kavanaugh admits that he cannot be expected to control his rage at the left.

This goes to the heart of the concern that has been so well and wisely expressed by Justice Stevens, a Republican appointee to United States Court of Appeals for the Seventh Circuit in 1970 and then to the Supreme Court in 1975, who refused to follow a party line during a tenure of almost 40 years as a federal jurist.

Justice Stevens, who once praised Kavanaugh, said this week that the nominee’s testimony to the Senate had been disqualifying. “I’ve changed my views for reasons that have really no relationship to his intellectual ability or his record as a federal judge. He’s a fine federal judge, and he should have been confirmed when he was nominated,” the 98-year-old former jurist explained. “But I think that his performance during the hearings caused me to change my mind.”

Kavanaugh’s testimony revealed passions and prejudices that were so fierce as to create a sense that, in the words of Justice Stevens, “he has demonstrated a potential bias involving enough potential litigants before the court that he would not be able to perform his full responsibilities. And I think there is merit in that criticism and that the senators should really pay attention to it.”

“For the good of the court,” said Justice Stevens, “it’s not healthy to get a new justice that can only do a part-time job.”

It is even less healthy to get a justice who might do a full-time job of making sure, in the deliberations and decisions of the Supreme Court of the United States, that “what goes around comes around.”