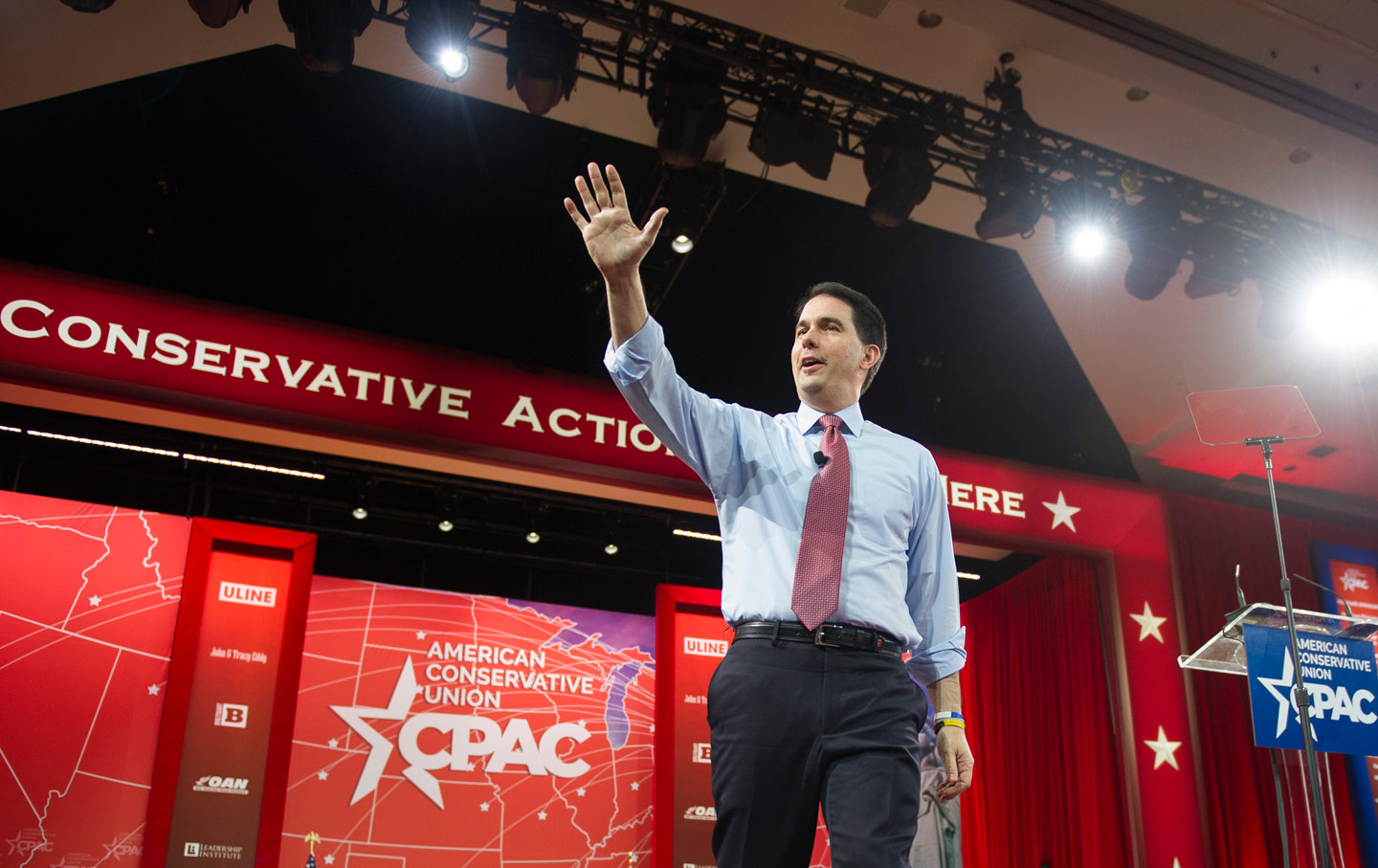 I have known Wisconsin Governor Scott Walker since he was a young state legislator. We used to talk a good deal about our differing views on how to reform things: campaign finance rules, ethics regulations, social-welfare programs.

We seldom reached agreement. But I gave him credit for respecting the search for common ground. And for understanding that a disagreement on a particular matter is never an excuse for ending the search—or for disregarding others who are engaged in it.

But that was long ago. Scott Walker has changed a great deal—and not, I fear, for the better.

He is deep into a political career that has seen plenty of ups and downs; and, now, he is grasping for a top rung on the ladder: the Republican nomination for the presidency in 2016.

On Thursday, at the Conservative Political Action Conference, Walker was asked how he would respond to ISIS, and the “radical Islamic terrorism” he had condemned in his speech to the group. Walker told the crowd: “If I can take on 100,000 protesters, I can do the same across the globe.”

That was an unsettling statement. Even conservative commentators who are inclined to praise Walker acknowledged that it was “a terrible response.” National Review’s Jim Geraghty explained that “taking on a bunch of protesters is not comparably difficult to taking on a Caliphate with sympathizers and terrorists around the globe, and saying so suggests Walker doesn’t quite understand the complexity of the challenge from ISIS and its allied groups.”

Former Texas governor Rick Perry, who knows a thing or two about making mistakes on the campaign trail, said, “I think, you know, some of the statements that he’s made are obviously problematic for him.”

“You are talking about, in the case of ISIS, people who are beheading individuals and committing heinous crimes, who are the face of evil,” Perry continued. “To try to make the relationship between them and the unions is inappropriate.”

Walker is “walking back” as quickly as he can, and griping once more that the media will “misconstrue” his message. Unfortunately, this is not the first time he has suggested that his “experience” with Wisconsinites who disagreed with his assault on workers and public education and public services has somehow prepared him to stand strong on the global stage.

The trouble with this calculus is that the protesters in Wisconsin were teachers and nurses and librarians. They were the parents of ailing children. They were seniors who were worried about access to healthcare and the security of their pensions. They did not threaten Scott Walker. They asked him to listen, to care, to simply respect them.

Scott Walker refused to do so in 2011. He is still refusing to do so.

This is not a “mistake.” This is the political path Scott Walker has chosen. When citizens assembled and petitioned their government for the redress of grievances in 2011, Walker chose as their governor to disrespect and disregard them.

At times, he did so in the soft language of a political careerist, mouthing talking points prepared to soften the blows. At times, he did so in the malicious language of the hyper-partisan, trading notes with a caller he thought was billionaire campaign donor David Koch about deceiving legislators, thwarting prospects for compromise, and how he and his aides “thought about” using what the caller described as “troublemakers” to disrupt demonstrations by nursing home aides and teaching assistants and Head Start educators. But the default position was always the same: disrespect and disregard.

Now, as an all-but-announced presidential candidate bidding for the favor of his party’s fiercest partisans, Walker continues to choose to disregard and disrespect those who dared to defend their livelihoods, their communities and their state.

I know there will be critics of the governor who say that this is who he has always been. I have a different view. I believe this is what he has become. After all these years of aspiring to higher office, this is what the experience has made Scott Walker

That prospect ought to cause even Walker’s most ardent advocates to pause and consider whether this man is ready for presidential politics.

This has very little to do with liberalism versus conservatism, Democrats versus Republicans. This goes much deeper, to the question of how a potential contender for a powerful position views himself, his experiences and the responsibility that he proposes to embrace.