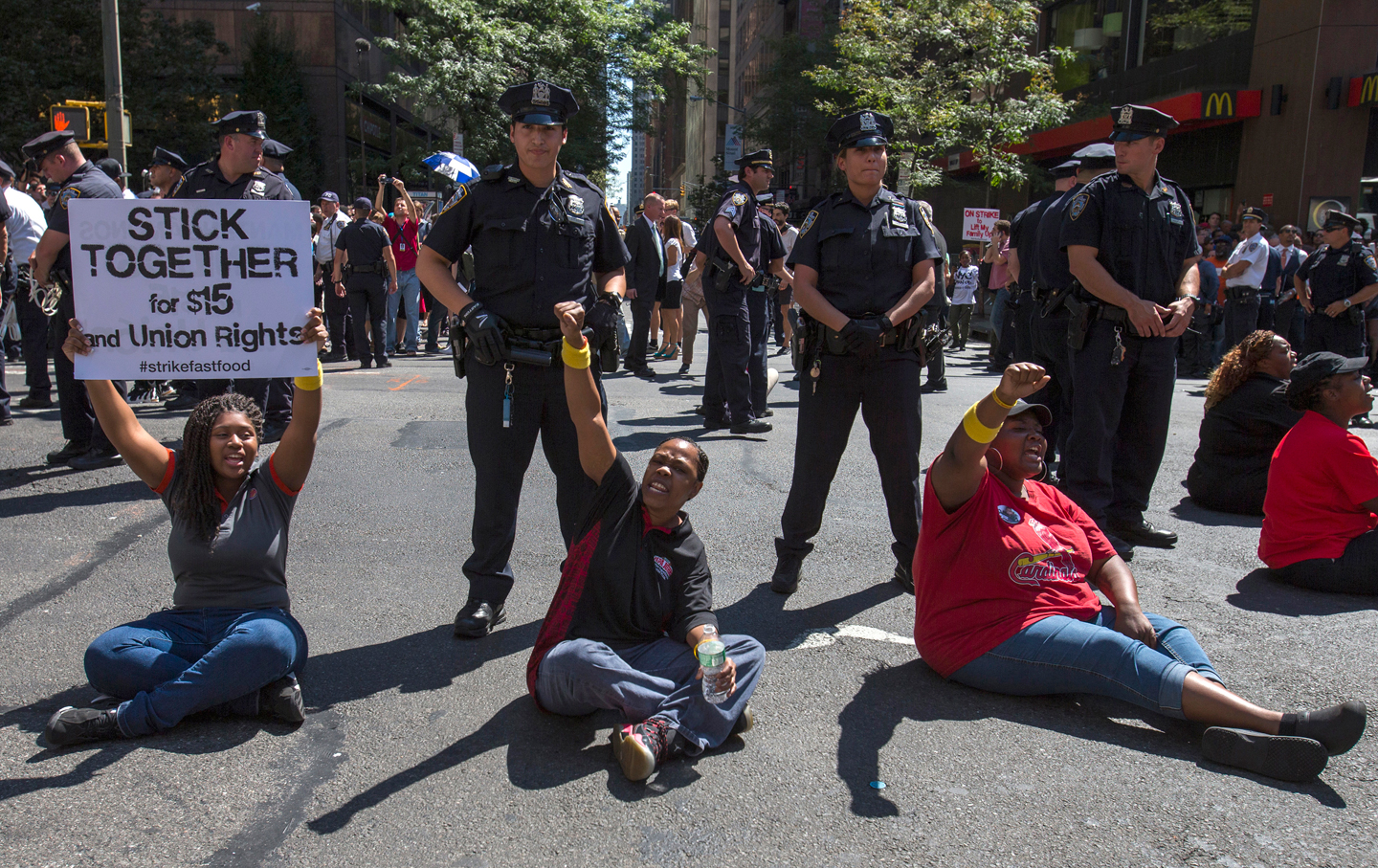 Liberals need to own the wage problem. Wages remain lower than they were before the Great Recession, following a generation of virtually no growth. Identifying why this is, and understanding the way out, will be essential as the economy gains steam yet still leaves many people behind. And this, in turn, will require overthrowing the reigning attitude that liberals have brought to our economic crisis. Let’s call it liberal nihilism.

Liberal nihilists try to explain why the economy isn’t serving workers, but they do so in ways that render us powerless to fix the problem. There’s a version where workers simply don’t have the education or skills necessary to handle new high-tech jobs. There’s another, similar story in which robots and globalization are taking all the jobs, leaving workers behind in the process.

These stories blame an impersonal market and individual failures for the stagnation of wages, but they don’t fully explain the thirty-five-year decline. For example, we don’t see the gains that would be expected if robots were really replacing workers. (Indeed, low pay for workers is a likely reason many businesses don’t even bother trying to upgrade their equipment.) The economy isn’t even working anymore for highly skilled workers, with many well-educated people seeing stagnant pay or being forced to take low-skill jobs.

But while these explanations are incorrect, that isn’t what makes them nihilistic. The nihilism rests in the fact that these stories are palliatives meant to relieve the anxiety of facing a massive political problem. They describe the collapse in wage growth not as a site of collective political struggle but instead as a story where no one—especially policy-makers—is responsible.

To address the issue of stagnant wages, we’ll have to leave that attitude behind, because the three major institutions that will determine wage growth are political ones.

The Federal Reserve is the first culprit. Contrary to popular belief, the Fed has been overly cautious during the Great Recession, refusing to announce bolder targets or set long-term interest rates directly. This caution will come to a head this year, when the Fed’s chair, Janet Yellen, will have to decide when to begin raising interest rates. If she acts too soon, she will slow down the economy, meaning labor will never regain the bargaining power it needs.

But wage growth is also a matter of how our productive enterprises are organized. Over the past thirty-five years, a “shareholder revolution” has re-engineered our companies in order to channel wealth toward the top, especially corporate executives and shareholders, rather than toward innovation, investments and workers’ wages. As the economist J.W. Mason recently noted, companies used to borrow to invest before the 1980s; now they borrow to give money to stockholders. Meanwhile, innovations in corporate structures, including contingent contracts and franchise models, have shifted the risk down, toward precarious workers, even as profits rise. As a result, the basic productive building blocks of our economy are now inequality-generating machines.

The third driver of wage stagnation is government policy. As anthropologist David Graeber puts it, “Whenever someone starts talking about the ‘free market,’ it’s a good idea to look around for the man with the gun.” Despite the endless talk of a “free market,” our economy is shaped by myriad government policies—and no matter where we look, we see government policies working against everyday workers. Whether it’s letting the real value of the minimum wage decline, making it harder to unionize, or creating bankruptcy laws and intellectual-property regimes that primarily benefit capital and the 1 percent, the way the government structures markets is responsible for weakening labor and causing wages to stay stuck.

This is not how Democratic politicians and liberal thinkers usually talk about the economy. There is a comfort—perhaps even a glee—in waving away these difficult political problems and replacing them with a story in which no one is at fault, save the workers themselves. But if liberals want to ensure a broadly shared prosperity, let alone present a compelling narrative about how their policies will work for voters, they’ll need to recover these stories.