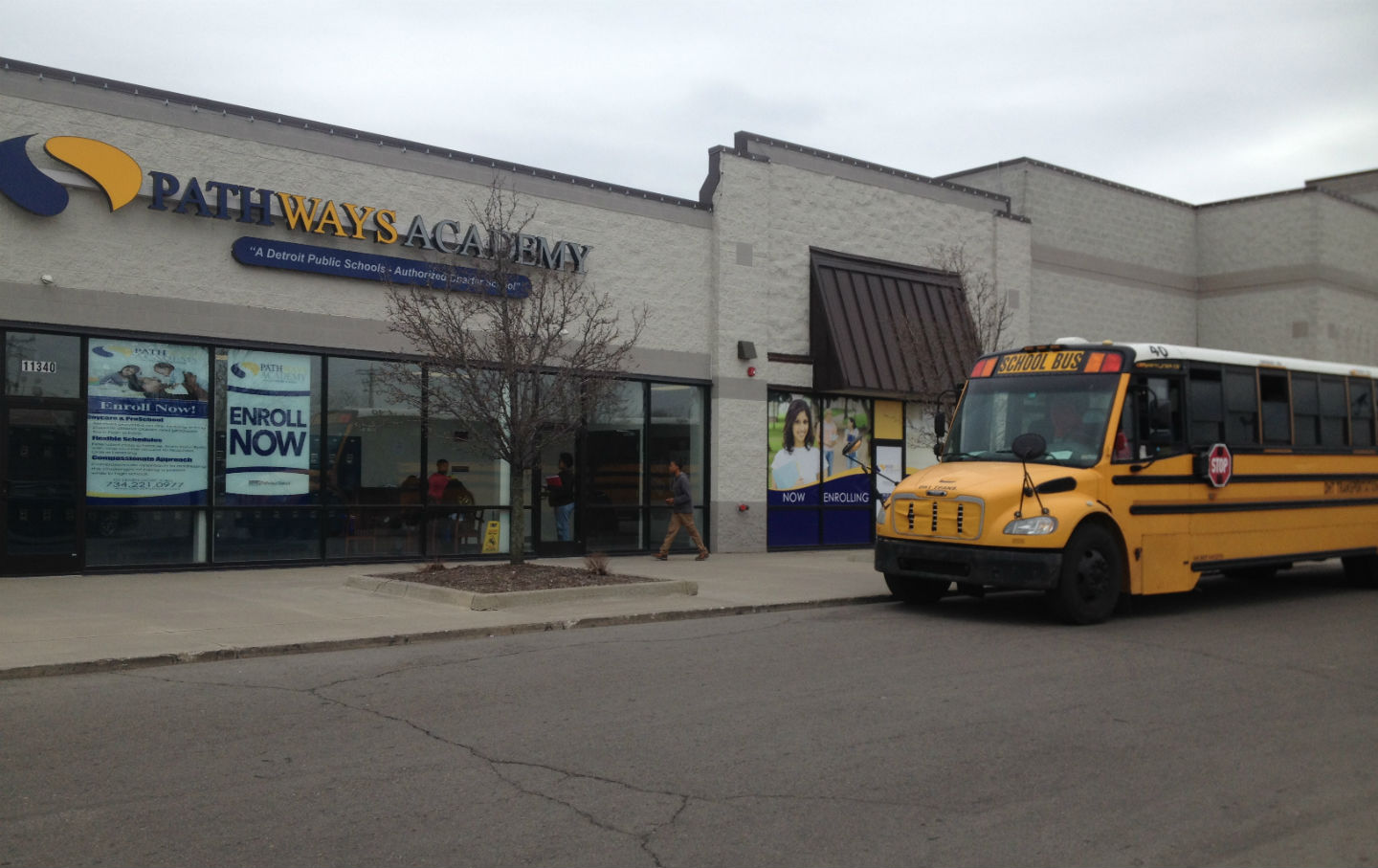 This story was produced by the Hechinger Report, a nonprofit, independent news organization focused on inequality and innovation in education.

A film crew embedded at the Catherine Ferguson Academy on the Detroit’s west side captured a garden in bloom in the middle of the city—bees making honey, goats making milk, home-grown apples being pressed into cider, and small children learning to thrive in nature.

But mostly what’s caught blossoming in a documentary called Grown in Detroit, by Dutch filmmakers Mascha and Manfred Poppenk, are the teenage moms enrolled at the school.

The roughly 300 girls at the Detroit public school studied math and history while learning to care for crops, horses, their children, and themselves—sometimes in integrated lessons in which a science class on mammals and mammary glands led to milking the school’s goats, which led to conversations about breastfeeding, which led to a young mom nursing her baby instead of using a bottle.

“You are special in this place,” the school’s principal, Aseenath Andrews, is heard telling her students during an assembly in one of the documentary’s opening scenes. “If you’re not special any place else, you are special here.”

Two years later, the expensive-to-run school was dumped by a school district desperate to cut costs. It briefly survived as a charter school but was so altered by the changes, it never fully recovered. It closed its doors last year.

The school was among dozens of dedicated programs for pregnant and parenting teens that have been shut down in recent years as teen pregnancy rates have plunged and cash-strapped cities and states have looked for ways to save money.

But while some of the shuttered programs were academically inferior to typical schools or served largely to keep pregnant girls away from the general population, Catherine Ferguson found a way to mix strong academics with robust student supports to send most of its students to college.

While most teen moms drop out of high school—a third won’t earn a diploma or GED before their 22nd birthday—Catherine Ferguson boasted a 90 percent graduation rate.

The students succeed because “I expect it,” Andrews told author Mark Binelli for his book Detroit City Is the Place to Be.

Binelli was one of a flood of reporters who profiled the school for its impressive stats and for the unusual farm that flourished in its schoolyard.

Catherine Ferguson also made the pages of Oprah’s O magazine and appeared on MSNBC.

But in 2011, an emergency manager trying to address a crippling budget deficit in the Detroit Public Schools included Ferguson on a list of schools that needed to become charters to avoid closure.

Protests erupted among students and supporters, including celebrities like Danny Glover, until the school got a last-minute reprieve from a charter school company that agreed to take over the school.

But the rescue was short-lived. Many teachers quit to avoid losing their public school pensions while working for a charter. Some students left when they learned the new management company—chartered to work with kids who’d been expelled or in jail—would require students to get court referrals to be admitted. And fewer new students arrived because public school principals were reluctant to refer students to a charter school that would draw money from an ailing district.

The lack of referrals is mainly what sunk the school, said Steven Ezikian, interim superintendent of the Wayne County Regional Educational Service Agency, which authorized the school’s charter.

Students were also turned off by the lack of transportation since the school no longer benefited from public school busing.

“It’s hard to sustain a school with under 100 students enrolled,” Ezikian said.

The school later experimented with a project-based curriculum that was so unpopular, a group of students filed suit against the school in 2013 alleging it was depriving them of their right to an education.

And with high expenses from a large, aging building, the school couldn’t survive.

It was heartbreaking, said Nicole Conaway, one of three teachers who stayed on after the school became a charter but who later joined the suit against the school.

“Whenever there’s an economic downtown, it’s the most vulnerable—women and children—who get hurt the most,” she said.

Andrews, the school’s long-time principal, declined to discuss the school, saying the subject was too painful for her, but attributed its demise to a society that doesn’t care about pregnant teens or their babies. “Girls are expendable,” she said.