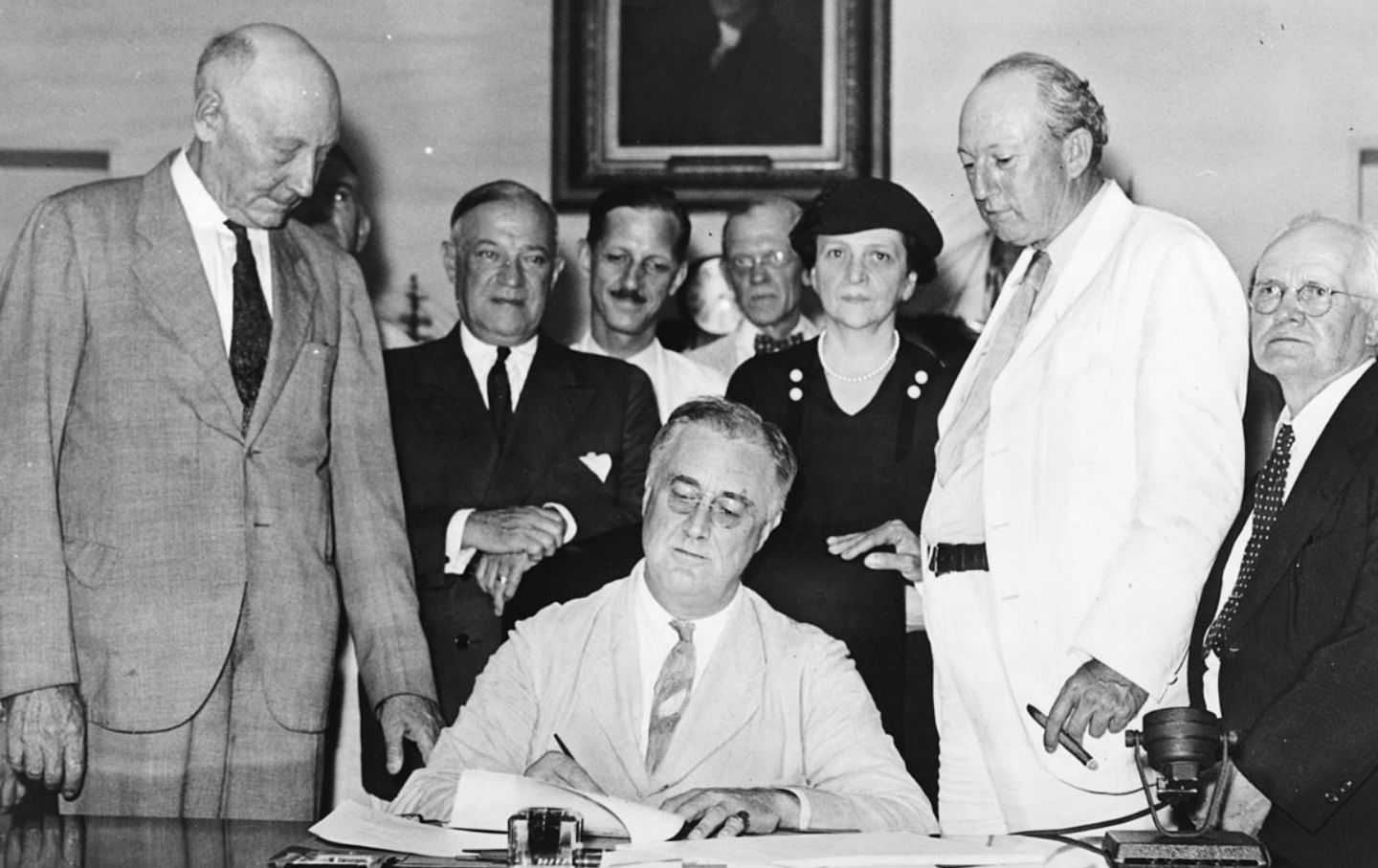 When Arthur Schlesinger Jr. was once asked to reflect on the forces that shaped the 20th century, he responded with a simple observation. “Take a look at our present world,” he wrote. It is “manifestly not Adolf Hitler’s world. His thousand-year Reich turned out to have a brief and bloody run of a dozen years. It is not Joseph Stalin’s world. That ghastly world self-destructed before our eyes. Nor is it Winston Churchill’s world. Empire and all its glories have long since vanished into history. The world we live in today is Franklin Roosevelt’s world.”

To the generation that was born and raised in the wake of the Second World War, long used to the multilateral economic and security structures that form the basis of what is referred to as the “liberal international order,” Schlesinger’s observations may not seem especially perceptive. But to the generation coming of age in era of Donald J. Trump and Brexit, the lessons gleaned from the twin crises of the Great Depression and World War II—lessons that propelled the United States into a position of global leadership—may not be so readily apparent.

This lack of historical perspective carries great risks—especially for the United States. For in spite of what the current occupant of the White House might have us believe, with his incessant calls to place “America first,” the rules-based multilateral system that emerged under FDR’s leadership during the Second World War was never perceived as a threat to American sovereignty or security. On the contrary, after nearly two decades of depression and war, international cooperation was viewed as a means to strengthen American security.

During the last few months of his life, FDR was never quite sure that the American people would embrace this vision. He devoted every ounce of his diminishing energy to try to bring what he often referred to as “the structure of peace” into being. The foundations for this effort began all the way back in January 1941, with his call for the establishment of a world based on four fundamental human freedoms—freedom of speech and expression, freedom of worship, freedom from want, and freedom from fear, “everywhere in the world.” Eight months later he would help craft the Atlantic Charter, with its object of securing for all people “improved labor standards, economic advancement and social security” within the confines of a new organization dedicated to the maintenance of world peace—eventually called the United Nations.

Thanks to the First Amendment of our constitution, Americans are well versed in the importance of freedoms of speech and religion. But the notion that American security was tied to freedom from want and fear was a novel concept; yet one that most Americans who bore witness to the rise of fascism in Europe and Asia in the decade before the war readily understood. As FDR once put it, “We have come to a clear realization of the fact that…necessitous men are not free men. People who are hungry and out of a job are the stuff with which dictatorships are made.” Viewed from this perspective, America’s so-called “isolationism” of the 1930s—which can more accurately be defined as unilateralism—was clearly a failed policy; a naive and dangerous attempt to go it alone in a modern industrialized world that had long since left the 18th century agrarian idyll of the founding fathers behind.

The emergence of the ethno-nationalist populism that helped propel the likes of Donald J. Trump into power poses perhaps the most serious threat to the world that FDR created since his sudden death on April 12, 1945—73 years ago today. We may, in fact, already be saying goodbye to that world. Given that only 1.5 million or so of the 16.1 million American men and women who donned the uniform in World War II are still alive, perhaps the demise of FDR’s world is inevitable.

Of course, the world has changed dramatically since the shock of the president’s death reverberated to the far corners of the earth. Free-market fundamentalism has shifted the vast majority of the world’s wealth to the top 1 percent. There can be little doubt that FDR and his generation would be quick to recognize that unmitigated globalization, like unmitigated capitalism, would in the end prove self-destructive, because an all-abiding faith in free markets is no substitute for the sorts of commonsense financial rules and regulations that were put in place in the early years of the New Deal and in the 1944 Bretton Woods Accords.

The economic damage that the United States and Europe have experienced as a result of this rush towards unregulated globalization certainly deserves the world’s attention. And here, we must acknowledge that Mr. Trump may be correct in his unstudied appeals for the reform of the international trading system. But when we consider the precarious state of the world today and the ominous reverberations of the 1930s seen in the decline of democracy in parts of Europe and Asia, and the alarming rise of ethno-nationalism with which it has been accompanied, it seems more important than ever to address the root causes of the discontent that is fueling these trends.

Unfortunately, a US foreign policy based on “America first,” high tariffs, and a return to the unilateralism of the past is wholly inadequate to meet this challenge. It may appeal to Mr. Trump’s base, but the world is far too integrated and complex for such an effort to have much of an impact on the myriad of social, economic, and environmental problems that plague us today.

In his first State of the Union Address, Franklin Roosevelt observed that “civilization cannot go back,” or “stand still,” but in all cases must “go forward.” Rather than return the nation to the failed policies of the past, FDR committed his administration to the formation of an “economic and social structure capable of dealing with modern life.”

On the anniversary of the day that people the world over mourned the passing of the leader that called upon humanity to reject fear and embrace hope, we might do well to heed this advice. We may also want to contemplate the risks involved in saying goodbye to FDR’s world, and reflect on the warnings that FDR issued to his fellow countrymen near the end of his life about the dangers involved in a return to isolationism. “In our disillusionment after the last war,” he remarked in last State of the Union address, “we preferred international anarchy to international cooperation with Nations which did not see and think exactly as we did. We gave up the hope of gradually achieving a better peace because we had not the courage to fulfill our responsibilities in an admittedly imperfect world.”

“We must not let that happen again,” he said, “or we shall follow the same tragic road again—the road to a third world war.”