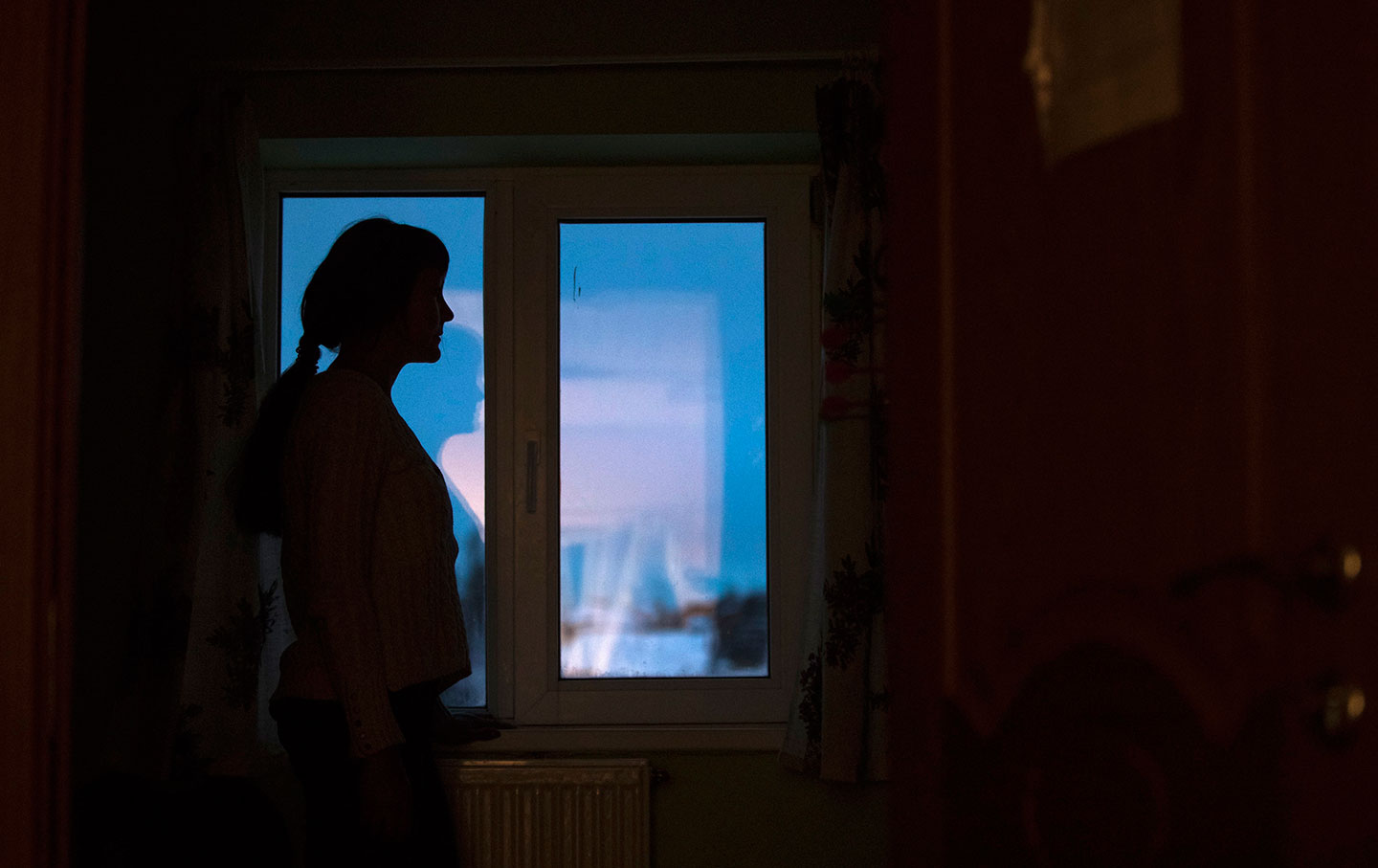 A survivor of domestic violence looks through a window in a women’s shelter outside Moscow, Russia. (AP Photo / Pavel Golovkin)

In St. Petersburg the Vesna (“Spring”) civil-society movement is holding a street action. In an improvised stage made from a boxing ring, activists present three scenes: an alcoholic beating an elderly pensioner, a husband punching his wife, and a child being physically punished by a parent.

The demonstration came in reaction to the decision of the Russian parliament, or Duma, on Friday, January 27, 2017, to remove battery assault of family members from the criminal code and bring it instead under the jurisdiction of administrative law. In practice this means that while there used to be a two-year maximum sentence for beating a spouse or a child, now the perpetrator will get off with a fine of up to 30,000 rubles ($500) or 15-day detention or 360 hours of community service. Last year, the criminal code was amended to decriminalize battery assault, with the exemption of family victims. Last week 380 deputies of the Duma voted to extend the decriminalization to cover assault on family members. Only three voted against such a dangerous change.

On the eve of the final vote, there were protests in Russian cities initiated by women’s and human-rights organization, while federal and regional media warned of the dangers of this decision. People of the varied views and political convictions spoke out against it, including many experts and even law-enforcement agencies. The critics of the amendment include the Ministry of Internal Affairs (one of the initiators of the law on preventing violence), the Scientific Research Institute of the Prosecutor’s Office of the Russian Federation, the Serbsky Institute of Forensic Psychiatry, the Public Chamber of the Russian Federation, the Presidential Council on Civil Society and Human Rights, the Anna Center (an association of crisis centers), and the Consortium of Women’s Organizations, among many other civil institutions, ordinary lawyers, and police officials. In vain, women’s organizations asked the Duma to keep abuse of pregnant women and children a crime.

The initiators of the amendments, especially deputy Olga Batalina, declared (without citing any data) that society has long awaited the decriminalization of family battery, and Senator Elena Mizulina insisted, and not for the first time, that the main problem in the family is not domestic violence but women’s aggression and lack of respect for men.

Police statistics show the opposite. The first official Russian data on the victims of domestic violence published almost 20 years ago were horrifying—more than 10,000 women and almost 2,000 children die annually at the hands of husbands, partners, and other men close to them. That is comparable to the number of Soviet soldiers killed during the entire Afghan war in the 1980s. In 2015 alone, there were 50,000 cases of domestic violence. The director of the Anna Center, Marina Pisklakova-Parker, believes the number is actually much higher, since 70 percent of women who come to the crisis centers do not file police reports. The new amendment will decrease the number of official complaints even more and move the issue further into the shadows.

Ultra-right Russian nationalists hailed the election of Trump as a victory over LGBTs, feminists, and liberals.

Svetlana Aivazova, a member of the Presidential Council on Human Rights, considers the Duma decision a dangerous and backward step. One of the very few to vote against the amendment, Deputy Sergei Shargunov feels that it contradicts the Constitution. Mari Davtyan, a lawyer, reminded people that the issue is not about smacks and slaps but violence against women and especially against minors. She feels the amendment only complicates the position of domestic-violence victims, especially since there is no clear legal definition of domestic abuse. The need for such a law, a version of which is now under consideration by the Duma, has long been expressed, not only by experts and human-rights activists but by the police, who need a clear mechanism of action in protecting victims and preventing family abuse.

Over the last 25 years, attitudes toward domestic violence have changed significantly. In 1991 most people considered it a private affair. I remember how it took me months to persuade Vitaly Korotich, editor in chief of Ogonek magazine—the flagship of perestroika, which dared to print the terrible truth about the Soviet past and present—to run an article about abused wives. It took him a long time to understand that this was an important topic, so powerful was the taboo against taking it seriously. Today—thanks to the work of women’s organizations and the cooperation between Russian and international initiatives—people realize that domestic violence is a crime that must be punished. Even in popular television shows, the good cops protect the victims of violence and punish the macho-men wielding their fists.

Unfortunately, Russian parliamentarians yet again did not listen to victims, representatives of civil society, or professionals. Even more sadly, this ill-considered decision will not only complicate passing the long-anticipated law on family abuse but will also most likely give the green light to ultra-right nationalistic groups like Orthodox Parents or the Night Wolves, who unfortunately often have support of the authorities. They blame all of Russia’s woes on foreign enemies and fifth columns, infected by the liberal virus of human-rights advocacy. In their opinion, liberals and feminists who defend victims of violence are attacking the holy of holies—the sanctity of the family, the foundation of the unique “Russian world.” These groups hailed the election of Donald Trump as a sign of the victory of “normal Americans” over the LGBTs, feminists, and liberals.

It is important for Americans to understand that these are marginal groups, and no matter how much they shout, they do not express the opinions of most Russian people.

I very much want to believe that Vladimir Putin will not sign the shameful amendment, and that Russian legislators will learn to listen to professionals and citizens who want to live in a modern, civilized society, based on respect of the individual, and not in a new Middle Ages invented by populists and shameless spin doctors. And I am not alone. Protests against the Duma decision, and rallies of support for victims of domestic violence, are planned in many Russian cities.

This article was translated from the Russia by Antonina W. Bouis.