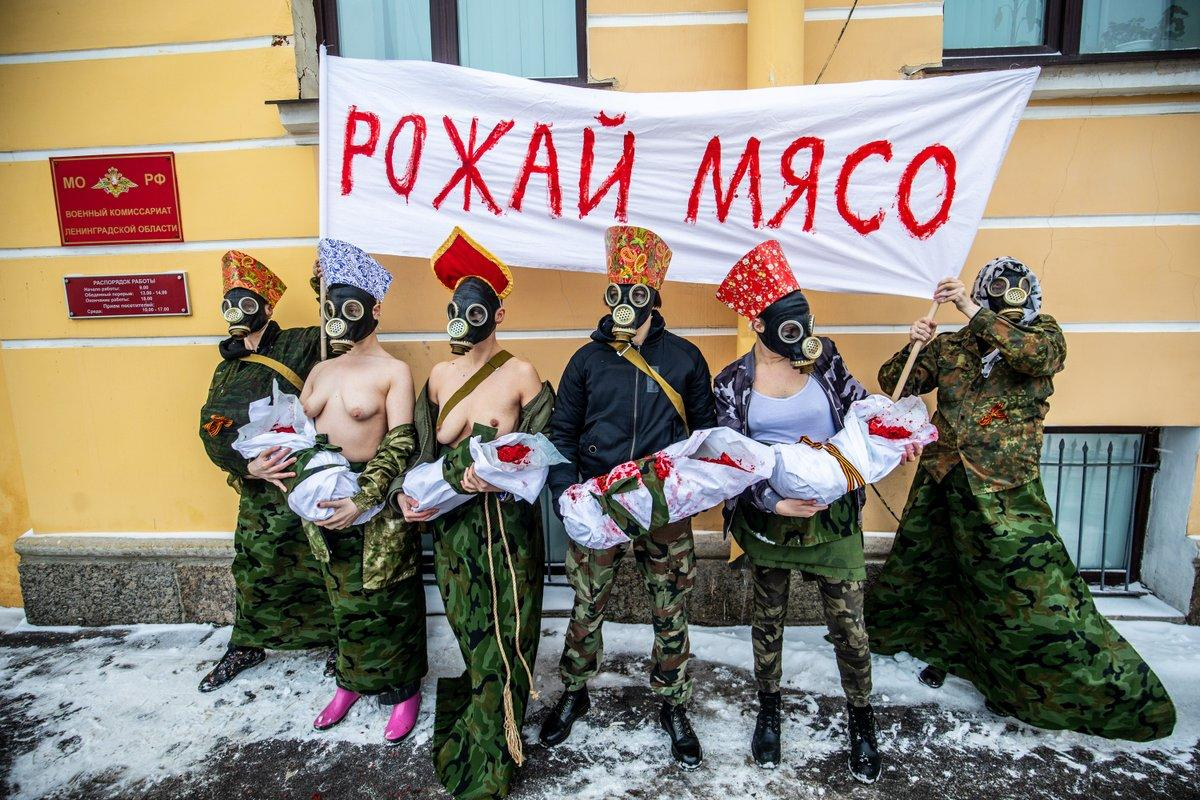 On February 23, the St. Petersburg Concert Choir performed at St. Isaac’s Cathedral for Fatherland Defenders Day. One of their songs was “On a Little Submarine with a Little Atomic Motor,” about Russian soldiers dropping bombs on the USA. The song, composed by the bard Andrei Kozlovsky in 1980 as a parody of Soviet propaganda glorifying the invasion of Afghanistan, was performed as a rousing patriotic work. The audience in “Russia’s cultural capital,” with few exceptions, took it at face value and applauded.

That same day, St. Petersburg feminists held an unusual demonstration in front of the military commissariat on the embankment of Fontanka River. They stood in a row, wearing gas masks and camouflage; some were topless, holding bloody bundles of raw meat wrapped in diapers and tied with the ribbon of St. George military award and signs reading “Give Birth to Meat,” “No to Violence Toward Men Who Do Not Want To Serve in the Army!,” “No to War.” The demonstrators explained their action to reporters: “Women are forced to give birth to cannon fodder that the state eats. We are against that. The army must be made professional.” The St. Petersburg police, known for its cruelty to protesters, did not react this time and arrested no one.

Two strains of Russian political thought came through in these episodes: the new militarism and the new pacifism. Both reflect public opinion in a society exhausted by poverty and vague policy decisions:

The new militarism in Russia is unprecedented in recent memory. One of the main slogans of the Soviet years—“just as long as there’s no war”—defined the general feeling of the era; people were ready to put up with deprivation, humiliation, vileness, and corruption to stave off the most terrible fate. Veterans did not like to talk about the war; the propagandists did it for them. The fewer surviving front-line soldiers there were, the louder the fanfares of propaganda, including the bumper sticker “We Can Do It Again!” on the Mercedeses driven by Russian yuppies on Victory Day in 2015.

The new militarism, flourishing and augmented by propaganda after the “annexation of Crimea” and the war in Eastern Ukraine, became the support of the information war and populism, destroying the concept of good and evil and asserting the use of force as an effective way of solving problems. This militaristic rhetoric distracts people from failures in foreign policy, the decreasing standard of living, and the absence of personal prospects, and fills them with a sense of false pride that makes independent thought difficult. The main danger of Russia’s new militarism is not only in the growth of military budgets at the expense of health, education, and science but also in the assertion of the priority of state interests over human life and dignity. These are the very things that Gorbachev and perestroika were against. It is no accident that some politicians today are calling for overturning one of the most important decisions of those years—the condemnation of the Soviet invasion of Afghanistan.

The new pacifism in Russia began in the Gorbachev era, with the end of arms race, the Cold War, and the war in Afghanistan. Millions of people were waiting for it; tens of thousands of activists in growing civic initiatives continued the work. Most of the activists were women. Women organized aid for former soldiers in Afghanistan in the late 1980s, spoke out against sending new recruits into war zones and against hazing in the army. After war with Chechnya began in 1994, the Committees of Soldiers’ Mothers became a real social and political force. Mothers, and with them female activists and journalists, went out undaunted by bombing attacks to look for their sons, exchange prisoners, identify the dead, call for attention, and organize help. It is thanks to them that new recruits are not sent to war and that hazing in the army has been reduced. The initiative Echo of War, uniting Russian and Chechen mothers, continues its work, now in Eastern Ukraine. They are a true army of peace!

In 2000, Russia took the course of subordinating all spheres of society to the “power vertical.” New laws made the work of NGOs more difficult, and later the law on “foreign agents” reduced their number even more. But the independent women’s movement is alive today. It is getting a second wind, especially in peace making. During the Russian invasion into Georgia in 2008, the women of both countries worked together to help refugees and children. The human-rights group March 8 (named for International Women’s Day) was formed in 2017. The March of Mothers’ Anger in 2018 gathered hundreds of people in support of members of the New Grandeur group who had been arrested on trumped-up charges. New initiatives exist on the Internet—and many of them are devoted to overcoming the cult of violence, sexism, and militarism. The new generation chooses the Internet and performance art to continue the struggle against the ruling “party of war.”