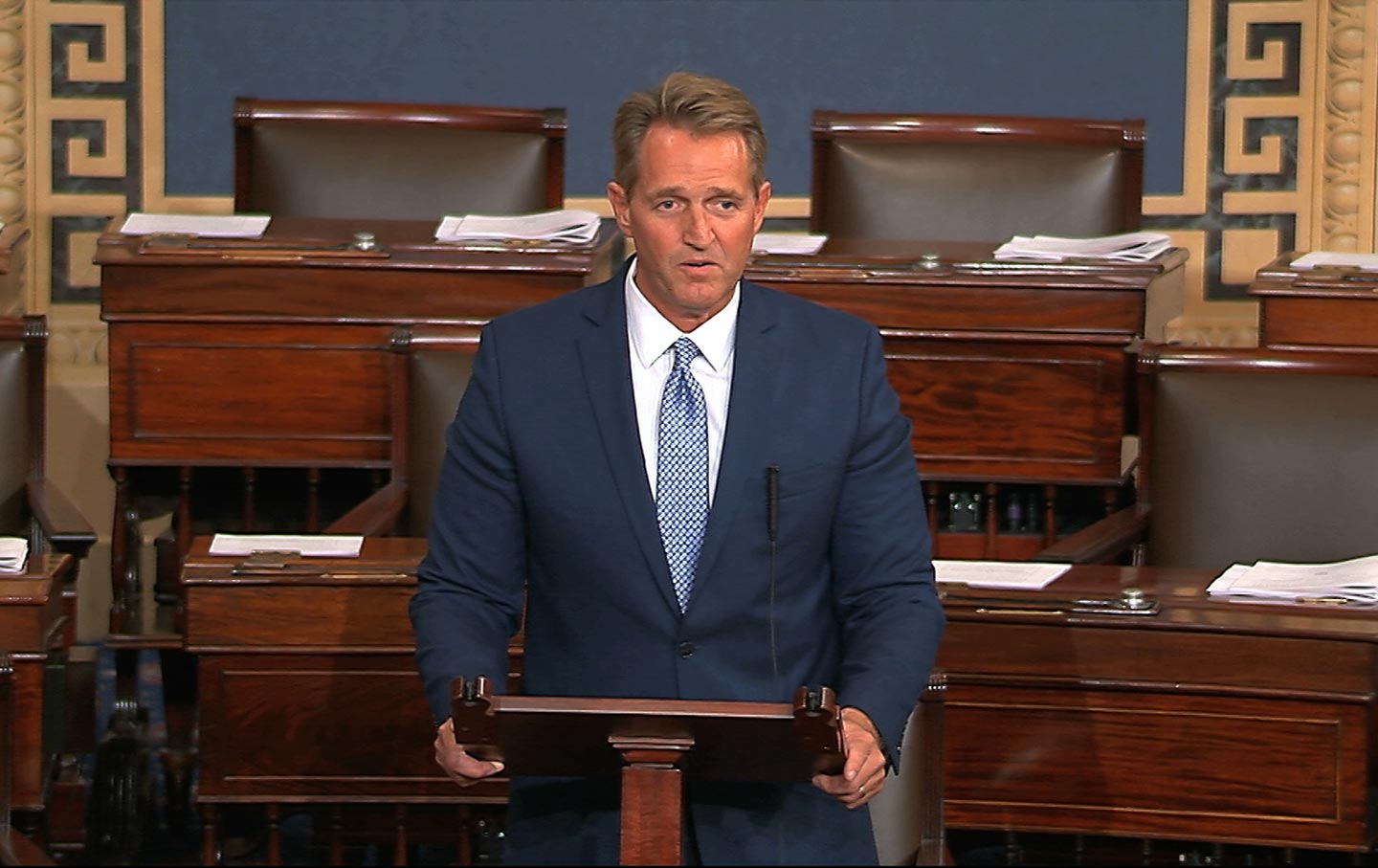 Rick Perlstein is the award-winning author of The Invisible Bridge: The Fall of Nixon and the Rise of Reagan, and, before that, the classic Nixonland. His journalism and essays have appeared in Rolling Stone, The New York Times, and The Nation. He wrote about Republicans against Trump for In These Times. This interview has been edited and condensed.

Listen To Rick Perlstein on the Start Making Sense podcast.

Jon Wiener: A lot of us were delighted to see a few Republicans standing up to Trump, especially Jeff Flake, from Arizona. On the Senate floor he denounced what he called Trump’s “reckless, outrageous and undignified behavior.” This was the day he announced he was quitting the Senate. He deplored Trump’s “flagrant disregard for truth and decency.” Don’t you wish there were more Republicans like Jeff Flake?

Rick Perlstein: The Republicans like Jeff Flake are like the Republicans we couldn’t stand until Trump came along. What worries me is that these Republicans are basically making no apologies for how the conservatism that came before Trump helped contribute to Trump. What worries me is that after Trump is gone, if Trump is gone prematurely, they’re going to be able to claim to be noble, heroic figures. The worst case scenario is that we’ll basically have locked in their kind of non-Trump conservatism even more firmly at the center of American politics.

JW: I see what you mean, but these guys are making a distinction between traditional conservative politics and Trump—a distinction that most Republicans are overlooking. If I could just quote the wonderful Jeff Flake some more: He deplored Trump’s “casual undermining of our democratic ideals and the personal attacks, the threats against principles, freedoms and institutions.” His point is that even conservatives need to take a stand against these things.

JW: Jeff Flake is not alone. There is Senator Bob Corker, Republican of Tennessee, who had this hilarious line where he called the White House “an adult daycare center,” and after Trump sent out some particularly egregious tweets, Bob Corker said, “Somebody missed a shift today.” I think we can thank him for that.

RP: That’s great, but I wish these guys would stand and fight instead of just retiring.

JW: Then there’s John McCain. He talks a lot about the revelations of the Trump campaign’s collusion with Russia, and he says, “There are a lot more shoes to drop on this centipede.”

RP: So drop them, brother! Get dropping!

JW: You are right that Jeff Flake and Bob Corker and John McCain vote with Trump about 90 percent of the time. They are voting for the tax cut [Flake and McCain did end up voting for the tax cut]. Tax breaks for the rich are bad, but if Trump launched a nuclear attack on North Korea, it would be worse. Don’t we need Republicans to help us stop him from doing that?

RP: I completely respect that argument. All the more reason to get rid of Trump. Why can’t we use this moment when Trump helps make the Republicans look especially stinky as leverage to try to take down the entire Republican agenda? This goes back to the campaign where Hillary Clinton gave that speech in which she said, “The alt-right is awful, they’re not at all like our traditional conservatives”—thereby enshrining traditional conservatism as something that was worthy of our respect. I hold to the position that it’s not worthy of our respect. We’ve got to bring them all down. I think that is going to be harder to do when we’re separating conservatives into the good guys who say nasty things about Trump, and the bad guys who stick with Trump. In fact they’re all bad.