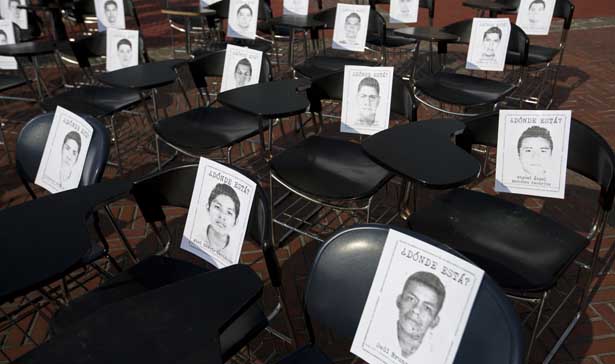 Photos of the forty-three disappeared students from Ayotzinapa sit on school desks as a form of protest by students in Mexico City (AP Photo/Moises Castillo).

George Packer’s New Yorker essay on the Paris killings, posted quickly after the attack, insisted that we can’t put the murderers in context, that we can’t compare them to, say the white-supremacist mass murderer in Oslo who killed seventy-seven Norwegians or nihilist school shooters in the United States, like the one at Newton who killed twenty children and six adults. Do not, Packer instructed, try to understand their action as a reaction to the invasion of Iraq or some other colonial or neocolonial intervention. We can’t, for instance, relate the rise of Nigeria’s Boko Haram to the lethal confluence of climate crisis, starvation, drought, poverty, and geopolitics, as this essay does. There is nothing to be “understood” about Islamist ideology. It just is.

Packer’s essay achieves the opposite of its intent: it makes you want to relativize, contextualize, historicize and sociologize, or at least it did me. I guess that’s the cost of life during (endless) wartime: the forfeiture of the ability to let the horror sink in, to take a moment to learn about the individuals who lost their lives, before receiving a lecture on how to force-fit those lives into the crusade. Teju Cole, also in The New Yorker, and Joe Sacco implicitly answer Packer’s insistence on the incommensurability of the Paris attack. “The suggestion that violence by self-proclaimed Jihadists,” writes Cole, “is the only threat to liberty in Western societies ignores other, often more immediate and intimate, dangers.”

I thought of Mexico, and the disappearance of forty-three activist-students in Guerrero. If one really wanted to fight a war between the forces of light and those of death and darkness, a good place to start would be to demand that Washington do three things: demilitarize the border (a policy Bill Clinton started around the exact time he signed NAFTA into law); implement a fair trade policy (one that doesn’t sacrifice rural peasants to US agroindustry and that doesn’t drive down Mexican—and Central American—wages to among the lowest rates in the world); and, most importantly, stop funding Mexico’s security forces.

As Christy Thornton wrote in The New York Times, since 2008, “the U.S. government has spent nearly $3 billion on security aid to Mexico through the Merida Initiative and the departments of defense and justice, much of it going to contracts with U.S.-based defense firms. This aid comes in addition to the direct sales of arms and other equipment to Mexico authorized by the State Department, which totaled $1.2 billion in 2012 alone.” This aid has continued even despite the “thousands of reports of soldiers and the police committing extrajudicial killings, kidnappings and disappearances, and torture—with impunity.”

The latest news implicates Mexico’s national army—the main recipient of all that Washington aid—in the disappearances, with soldiers accused of having “incinerated the bodies of the young students in crematory ovens.”

It is far easier to imagine reforming the world than reforming Washington policy. And, anyway, dying as a result of US security, border and trade policy (even if the deaths number in the hundreds of thousands) doesn’t bring about the kind of arousal, the sense of purpose, Packer craves, as Corey Robin has pointed out. Packer’s reaction to Paris recalls his reaction to 9/11, when he wrote that seeing all the flags sprouting after the attack awakened in him “alertness, grief, resolve, even love.” That awakening led Packer to become a loud voice in, as he put it, a “tiny, insignificant camp of ambivalently pro-war liberals.” Packer isn’t so much selling himself short by using the adjective “insignificant” as letting himself off the hook, absolved, as Michael Hirsh pointed out in a terrific review of Packer’s Assassins’ Gate, from considering the consequences of his war advocacy. And now he’s back, telling us that only by abstracting radical Islam as a singular evil can we truly understand how “decent” we all are.

Still, I wonder what it would look like if liberals like Packer were activated by Ayotzinapa the way they are by Paris, what they would write if they were willing to confront the illiberalness of Washington’s trade, border and security policy with the same passion they do radical Islam, or if they saw its barbarism with the same clarity they see barbarism in France and Nigeria. Maybe something like this revision (changes in bold) of Packer’s thoughts on Paris:

The murders today in Paris Mexico are not a result of France’s failure to assimilate two generations of Muslim immigrants from its former colonies Mexico’s failure to assimilate displaced rural peasants into modern life. They’re not about French military action against the Islamic State in the Middle East, or the American invasion of Iraq before that out-of-control drug cartels, or the war on drugs launched by the previous Mexican president. They’re not part of some general wave of nihilistic violence in the economically depressed, socially atomized, morally hollow West—the Paris Mexican version of Newtown or Oslo. Least of all should they be “understood” as reactions to disrespect for religion on the part of irresponsible cartoonists the effects of local political corruption or a “weak” federal state.

They are only the latest blows delivered by an ideology that has sought to achieve power through terror for decades. It’s the same ideology that sent Salman Rushdie into hiding for a decade under a death sentence for writing a novel, then killed his Japanese translator and tried to kill his Italian translator and Norwegian publisher since NAFTA has gone into effect has sent at least 6,000 migrants to their death in the desert. The ideology that murdered three thousand people in the U.S. on September 11, 2001. The one that butchered Theo van Gogh in the streets of Amsterdam, in 2004, for making a film has turned Mexico into a country of clandestine mass graves, where students are slaughtered merely for voicing their political opinion. The one that has brought mass rape and slaughter to the cities and deserts of Syria and Iraq Mexican women, many of them poor maquila workers, who are killed at a rate of six per day, their “bodies are often found badly mutilated, with particular attention paid to sexual organs and breasts, and dumped among garbage and waste.” That massacred a hundred and thirty-two children and thirteen adults in a school in Peshawar last month 45 NAFTA-protesting, pacifist Tzotzils, including 21 women and 15 children, in 1997. That regularly kills so many Nigerians, Mexicans, especially young ones, that hardly anyone pays attention. That slaughtered, in August 2010, 71 migrants, in a killing that actually claimed hundreds more victims (US officials were told that “the bodies are being split up to make the total number less obvious and thus less alarming”). Jesse Franzblau has linked much of this repression directly to US military support. Ninety-seven Mexican journalists have been killed over the last four years; 100,000 people have been executed and there exist “open cases” of another 22,000 disappeared.

Because the ideology is the product of a major world religion power, a lot of painstaking pretzel logic goes into trying to explain what the violence does, or doesn’t, have to do with Islam “free trade.” Some well-meaning people tiptoe around the Islamic economic connection, claiming that the carnage has nothing to do with faith Washington’s trade, military, and border policies, or that Islam the United States is a religion nation of peace, or that, at most, the violence represents a “distortion” of a great religion what free trade really means or the true intent of Washington’s policies. It’s that same painstaking pretzel logic allow leaders to say there is no problem caused by militarism that can’t be solved by more militarism. And that allows free-market ideologues like Thomas Friedman (who, like me, was part of that “tiny, insignificant” group of pro-war liberals) to believe that there is no problem caused by “free trade” that can’t be solved by more “free trade”– and to hail as a success an economic system that drives wages inhumanely, punishingly low.

These thoughts don’t offer a guide to mitigating the astonishing surge in Islamist killing around the world in “labor and political repression and egregious levels of violence” in Mexico and Central America since NAFTA and CAFTA went into effect, with political activists, whose names we here in the US never learn, whose identity we never assume in solidarity (“I am Antonio Bec Ac.” “I am María Margarita Ché Chub”) being killed on a regular basis and some regions in the Maya highlands living under a state of siege. … .

But the murders in Paris Guerrero were so specific and so brazen as to make their meaning quite clear. The cartoonists students died for an idea. The killers are soldiers in a war against freedom of thought and speech, against tolerance, pluralism, and the right to offend simply survive and fight for a dignified life—against everything decent in a democratic society. So we must all try to be Charlie Ayotzinapa, not just today but every day.