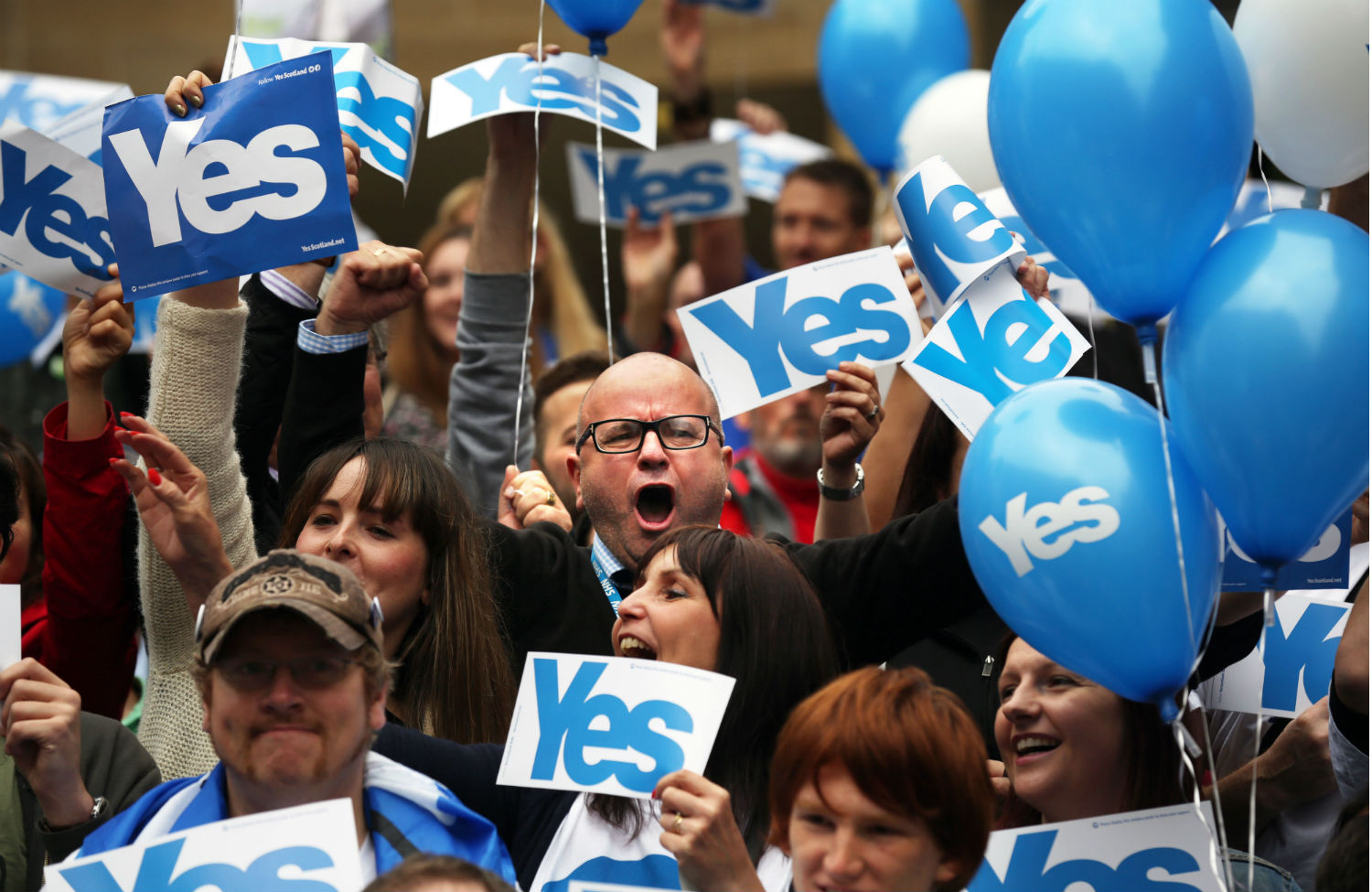 If the Scottish National Party was a small anti-austerity party that had never before made a real dent in British politics and suddenly shot into contention—grabbing dozens of seats away from the traditional parties and elbowing its way into position as the third-largest party in new Parliament—the world would take notice.

Well, the Scottish National Party is a small—make that formerly small—anti-austerity party. And it just made a real dent, a huge dent, in politics with an epic electoral breakthrough. “The tectonic plates of Scottish politics shifted yesterday,” said SNP leader Nicola Sturgeon on Friday morning. The veteran British political commentator Andrew Marr declared as the election results came in that “Scotland has moved decisively to the left.”

That move offers an important lesson for American progressives about going big in politics—especially anti-austerity politics. It is not just possible to run against the failed conservative policies of seeking to balance budgets with cuts to public services, attacks on public employees and their unions, and crude policies of privatization that redistribute wealth upward. It is necessary.

It did not used to be that what the leader of the historically small, historically marginalized Scottish National Party had to say was big news on the day after a nationwide election. But a lot has changed in recent years, and a lot more changed Thursday. Sturgeon, the First Minister in Scotland’s devolved parliament (the rough equivalent of a state legislature in the United States or a provincial assembly in Canada), put not just a party but an economic agenda on the table in the 2015.campaign. “I am not,” she declared. “going to support governments that plough ahead with austerity that damaged the poorest in society.”

That message resonated, with unprecedented force.

The big story out of Britain’s 2015 parliamentary election had two parts. Part one was, of course, that Prime Minister David Cameron’s Conservative Party retained power. That’s the news that most Americans will get. But part two was at least as dramatic. The SNP—running on a fervent anti-austerity platform that rejected Cameron’s policies and promised to work with any progressive party seeking to unwind them—won 56 of Scotland’s 59 seats in the British Parliament.

But there was a subplot to the tale of the SNP success story. The UK’s traditional party of the left, the Labour Party, ran an unsteady (sometimes bold, sometimes cautious) campaign that failed to displace Cameron and the Tories from enough English seats and led to a severe setback across Labour’s traditional stronghold of Scotland. With Labour and the national third party, the Liberal Democrats, slipping badly, the SNP grabbed dozens of seats it had never held before. It did this, at least in part, by creating an excitement factor that translated into turnout.

In Scotland, the turnout was more than 71.1 percent, way up from the 63.8 percent in 2010. For some competitive seats in Scotland, turnout was over 80 percent. Turnout among the young and low-income voters was high, in no small part because, as The Guardian’s Ian Jack noted, “Here is the queer thing, the thrilling thing and the frightening thing. Among the food banks and the trampled front gardens of the big housing schemes, poor people here have begun to feel they have power.”

What changed? The 2014 Scottish independence referendum shifted a lot. It put fundamental issues of self-determination on the table, as well as the prospect of rejecting austerity with an exit strategy that, as the slogan suggested, would “End Tory Rule” forever. Independence did not win, but it reshaped thinking about political and economic possibilities.

Historically, the SNP was seen as a narrowly nationalist party that focused first and foremost of independence for Scotland. It’s still pro-independence. But, in recent years, it has clearly identified as an anti-austerity party that has rejected cuts imposed not just by the current Tory government but the preceding Labour governments of Tony Blair and Gordon Brown.

“The entire focus of the Westminster debate is on the deficit. Now, the deficit is hugely important. But it is a symptom of economic difficulties, not just a cause of them,” argued Sturgeon in much-reported remarks in February. “It’s simply untrue to say that we are ‘all in this together’. The cuts have had a disproportionate impact on women, people with disabilities and people on low incomes. The most vulnerable are bearing the heaviest burden.”

There was no mystery about the point of the independence referendum in 2014. Supporters of the referendum, led by the SNP and activist groups such as Scotland’s Radical Independence Campaign, sought not just a physical break but an economic break from Britain.

There was no mystery about the point of the Scottish National Party campaign of 2015. The SNP decried austerity and ripped not just the Tories but the whole political process for failing to establish a humane and functional economics.

There was far more clarity, and force, in the SNP campaign—so much so that, when Sturgeon appeared in a national debate with the leaders of the other parties, she sparked excitement far beyond Scotland. British papers announced that the Scottish first minister had “won” the debate. From across England came the ask: “Is there any way I can vote for the SNP here.” They couldn’t. The SNP was not an option on English ballots. (“Don’t tempt me,” said Sturgeon when asked about extending the party’s reach. But, in fact, she spoke favorably about the Green Party, which won well over 1 million votes and retained its single seat in parliament, and the Welsh nationalist Plaid Cymru party, which will have three seats in the new British Parliament. Throughout the campaign, Sturgeon proposed a grand alliance, including Labour and all the smaller parties of the left, to upend austerity once and for all.)

The Labour Party worked hard to be the alternative to the Tories, and it made some progress—increasing its share of the vote by 3.6 percent in England and picking up 15 new parliamentary seats there. But that was insufficient. “I’m bitterly disappointed that we’re looking at another Conservative government,” explained Sturgeon, even as she bluntly noted that ”Labour wasn’t strong enough to beat the conservatives in England.”

When Labour and the SNP went head-to-head in Scotland, Labour lost more than 40 seats. Why the wipeout? Despite the fact that Labour was the opposition party to Cameron and his government, it fully aligned with the Tories to oppose the 2014 Scottish referendum. Labour leaders failed to recognize that the referendum vote was not merely raising the issue of independence but the issue of austerity. While Labour was not going to back independence, its shoulder-to-shoulder campaigning with Cameron’s Conservatives blurred the lines of distinction.

Blurred lines are bad politics, especially when essential economic issues are being debated. They suggest what Sturgeon refers to as a “cozy consensus” around “slash-and-burn austerity.”

The message of the SNP breakthrough, not just for Scotland, and not just for Britain, is that people are sick of the “cozy consensus.” And they are ready to vote for radical alternatives. Americans progressives can, and should, learn from the emerging anti-austerity politics that says, unequivocally, that the cuts must end and a new economy must emerge.