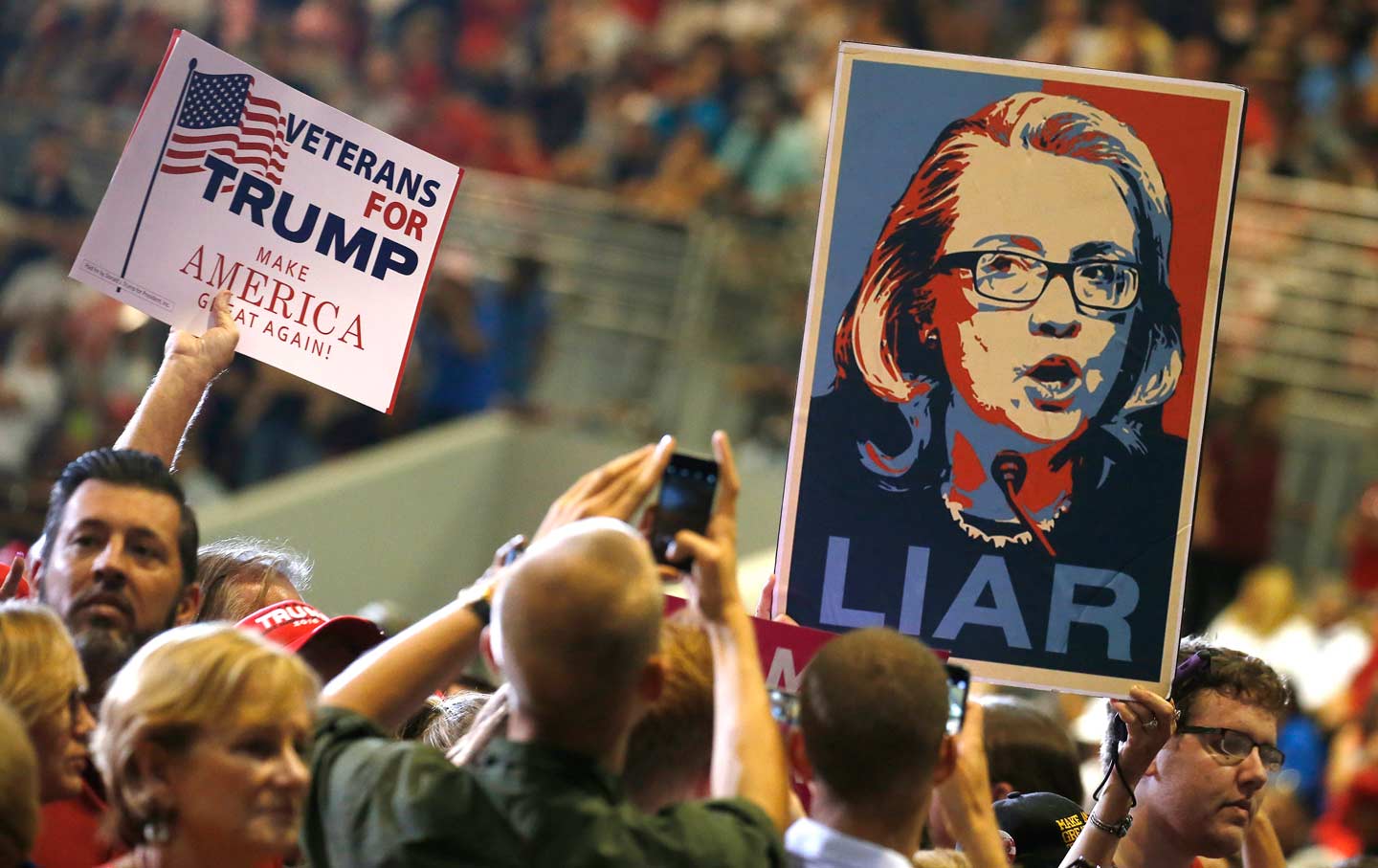 House Speaker Paul Ryan and Senate majority leader Mitch McConnell understand that a lot of voters are uncomfortable with the presidential nominee of their party. Though they both back Donald Trump, Ryan and McConnell recognize that Trump has said and done things that offend Americans who might otherwise consider voting Republican for president. That’s cool, the Republican leaders say, as long as those Americans consider their slate of candidates for the US Senate and House of Representatives.

There’s only one problem with this calculus: Many of the Republican House and Senate candidates are more Trump than Trump.

Consider the case of the candidate whom Ryan and vice-presidential nominee Mike Pence campaigned with on Saturday, whom Trump campaigned for earlier in the week, and whose campaign has benefited from a flood of last-minute money directed into Wisconsin media markets by McConnell and the Koch brothers.

Wisconsin Senator Ron Johnson, locked in a tight reelection race with Democrat Russ Feingold, does not just chirp about campaigning with Trump as “the Ronald and the Donald.” Johnson amplifies Trump talk. While the Republican presidential nominee predicts a “constitutional crisis” if he does not win, the senator from Wisconsin promises to stir that crisis up. If Trump is not the choice of the people, Johnson says that he is open to overturning the results by impeaching Hillary Clinton.

A millionaire Ayn Rand acolyte who chairs the Senate Homeland Security Committee, Johnson spoke at some length last week about his theory that Clinton committed impeachable offenses when she used a private e-mail server. And he left no doubt about his intentions. “I’m not a lawyer, but this is clearly written,” he claimed, after citing federal statutes in a rant about the Democratic nominee for president. “I would say yes, high crime or misdemeanor,” said Johnson. “I believe she is in violation of both laws.”

Johnson, whose vitriolic comments often go to extremes that even Trump avoids, will never be accused of being a heavy lifter in the Senate. But he wants to serve for six more years, and Ryan and McConnell are working hard to help him do that. If they succeed in keeping Johnson and others like him in chambers controlled by Republican majorities, Congress will become dramatically more obstructionist than it was during the Obama years.

The Wisconsinite is not alone. House Homeland Security Committee chair Michael McCaul, R-Texas, was scoping out impeachment scenarios in an interview Wednesday, and Congressman Trent Franks, the Arizona Republican who chairs a key House Judiciary subcommittee, told the Washington Post that, with regard to impeachment, “all options are definitely on the table.”

There are some GOP leaders who are unsettled by the voters-be-damned tenor of comments from Republicans like Johnson. “OK, I’m gonna [be] the adult in the room and say, ‘Calm down, back off, it’s not gonna happen,’” House Oversight Committee chair Darrell Issa said in a radio interview Wednesday. “The fact is we have impeached and removed from office nine federal judges in our history, no members of the executive branch, not a president, not a vice president, not a cabinet officer, so floating that word is usually a fairly reckless thing.”

That’s a rational response. But Republicans who get “fairly reckless” before an election are likely to get even more reckless once the voting is finished. Indeed, as Feingold’s campaign noted after the incumbent went off the rails, “Senator Johnson shows us exactly why he wants to stay in Washington: six more years of partisan attacks and endless campaign obsessions.”

Even President Obama took note of Johnson’s obstruction-on-steroids politics. “Right now, because a lot of them think that Trump will lose, they’re already promising even more unprecedented dysfunction in Washington, which is pretty hard to do,” Obama said while campaigning in North Carolina Wednesday. “You’ve got some Republicans in Congress who are already suggesting they will impeach Hillary. She hasn’t even been elected yet. And it doesn’t matter what evidence they just—they’ll find something. That’s what they’re saying already.”

The president asked, “How does our democracy function like that?”

The answer, of course, is that if Clinton wins the presidency but Republicans like Ron Johnson win Senate seats to supercharge their obstructionism, it will not function.