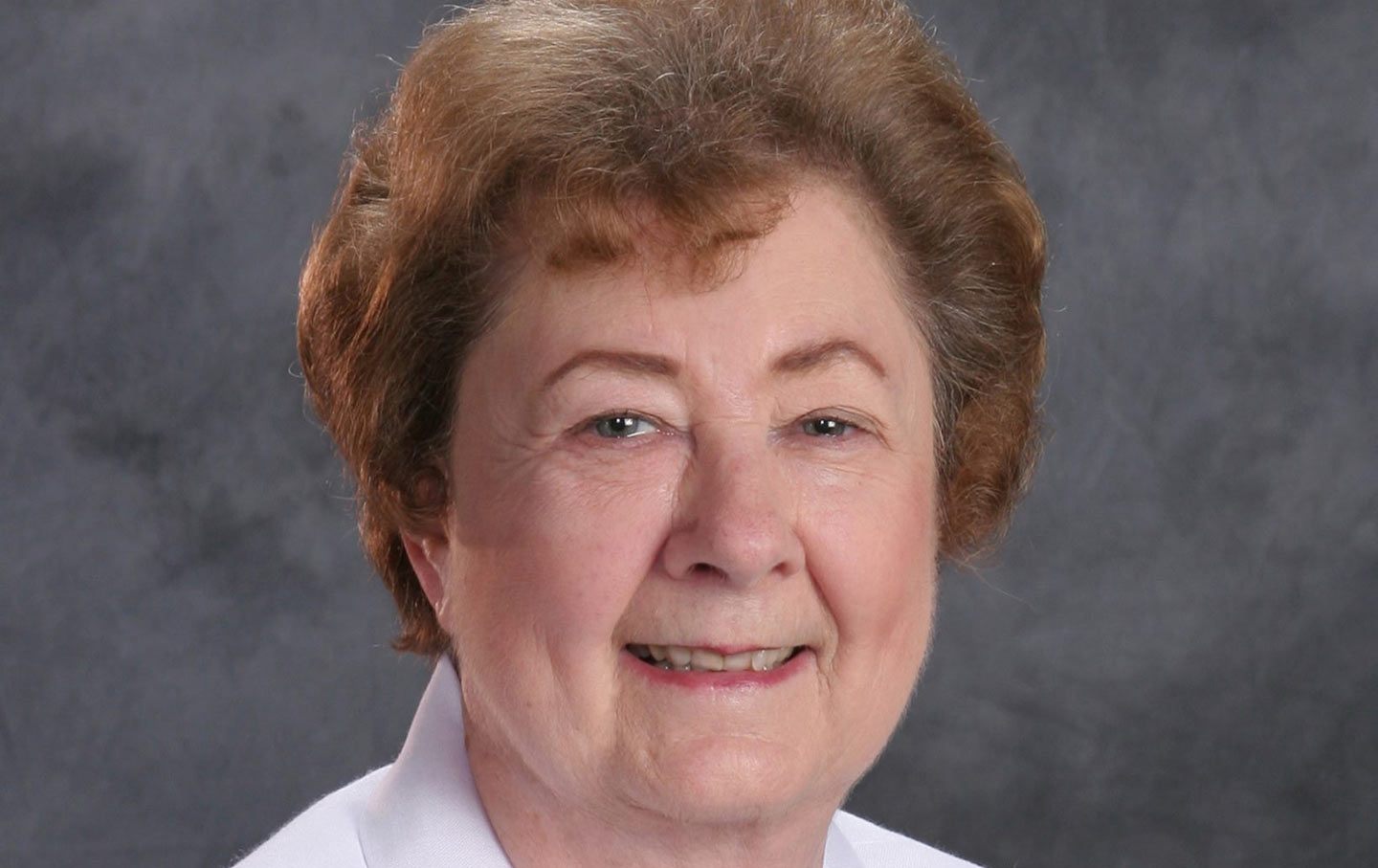 Marcia Moody, the remarkable New Hampshire state representative who was among the first legislators in the nation to raise the alarm about how austerity-advocating governors and corporate-tied American Legislative Exchange Council acolytes were warping policy in the states, has died at age 80.

A world traveler, she worked with the Army & Air Force Exchange Service in Europe before retiring to the town of Newmarket, New Hampshire, where she got active in politics as a supporter of Howard Dean’s 2004 antiwar presidential run. Marcia was inspired by the former Vermont governor’s argument that American politics would be repaired only if citizen activists stepped up and ran for office. When she heard the call, however, it was too late to get on the New Hampshire ballot. So she announced her write-in candidacy, taking on an entrenched incumbent. She went door-to-door in the community, with all the charm and determination that would come to make her a beloved figure on the left in New Hampshire and nationally.

To the surprise of almost everyone—perhaps even the first-time candidate—Marcia won.

Marcia kept winning. In a district with a history of electing Republicans, she regularly topped the vote—even in Republican-wave years where control of the New Hampshire legislature flipped to the GOP. She did not do this by pulling punches, triangulating, or edging toward the center. While she delighted in discourse and befriended Democrats, Republicans, Libertarians, and Greens, Marcia was a passionate progressive. And she had a sense of right and wrong that made her an ardent foe of big-money in politics, lobbyist abuses, and influence peddling.

Marcia Moody was honored by The Nation as our “Most Valuable State Legislator.”

Before most legislators had any sense of the role that the American Legislative Exchange Council (a national group funded by the Koch brothers and corporate interests) played in moving so-called “model legislation” through Republican-controlled statehouses—to the detriment of voting rights, labor rights, and consumer and environmental protections—Marcia was raising the alarm. She wrote articles, organized forums, and regularly challenged proposals that she said were advanced not to aid New Hampshire but to deliver for corporate interests. When Democrats retook control of the New Hampshire state House in 2012, Marcia and a group of allies set out to identify and overturn ALEC-influenced bills that had passed in previous sessions—with an eye, in particular, to protecting worker rights.

At the end of 2012, The Nation honored Marcia as its “Most Valuable State Legislator,” selecting her as the standout among the nation’s 7,383 state representatives and senators. The Nation’s “Honor Roll” citation read:

A 2004 backer of Howard Dean who heeded the Democracy for America call to get into politics at the grassroots, New Hampshire State Representative Marcia Moody was elected eight years ago as a last-minute write-in candidate. She’s been re-elected ever since as an uncompromising advocate of healthcare reform, environmental protection and renewable energy. She takes global warming seriously, supporting tax subsidies for homeowners who seek alternatives to fossil fuels. She takes marriage equality seriously, championing the right of lesbian and gay couples to marry. She takes worker rights seriously, fighting to raise the minimum wage and defeat anti-labor “right to work” legislation. But what’s really striking about Moody is her determination to put all the pieces together. When the machinations of the right-wing American Legislative Exchange Council were revealed (initially by the Center for Media and Democracy and The Nation; see our special issue “ALEC Exposed,” August 1/8, 2011), she began a tireless campaign to reveal the influence of ALEC’s corporate-sponsored “model legislation” in New Hampshire, and to challenge fellow legislators allied with the group. “Howard Dean said that politics isn’t a spectator sport. If you just vote, you get a D,” Moody says. “What you should do is devote three hours of your week to your favorite candidate. If you run for office, you get an A.” Moody gets an A+.

Marcia kept getting high marks. Democracy for America chair Jim Dean described her as “the model of the kind of community-focused, grassroots organizers our country needs in elected office to combat growing income inequality and the right-wing ideologies that enable it.” And progressive leaders and activists from across the United States relied on her as a resource—and a source of inspiration. In New Hampshire, her endorsement was coveted by Democratic contenders, as the 2016 presidential race illustrated. More than a year ago, Marcia joined other Democracy for America activists in urging Massachusetts Senator Elizabeth Warren to seek the Democratic nomination. When Warren opted out, Moody received personal appeals from candidates and surrogates, but she quickly aligned with the campaign of Vermont Senator Bernie Sanders. She joined the senator’s New Hampshire steering committee, delighting initially in his robust economic populism and later in his primary and caucus victories—which began in New Hampshire.

Marcia and I had lunch on the day of the New Hampshire primary. She was filled with stories of meetings with former Secretary of State Hillary Clinton at the Water Street Bookstore in downtown Exeter—despite some differences on issues, they got on well (as Marcia did with everyone)—and all the other political activists and authors and reporters who were showing up in Portsmouth and Exeter and Newmarket. Marcia was too modest to say it, of course, but many came—in primary season and out of it—to appear at events she organized in libraries, town halls, churches and bookstores. When she heard that anyone was ready to raise the progressive banner in New Hampshire, she was ready to make it happen, exclaiming: “Whooo Hooo. I will start working on it right away.”

Even as Marcia’s health was failing her, she kept talking politics. Our last phone conversation, just a little over a week ago, was filled with talk of primaries and platform fights and the upcoming New Hampshire gubernatorial race. (From the hospital bed where she was battling a nasty heart condition and related ailments, she recalled conversations with former congresswoman Carol Shea Porter, her great friend and compatriot, and explained why she thought New Hampshire Executive Council member Colin Van Ostern would win the state’s top job this fall.) That afternoon, like every other day, Marcia had a kind word for everyone who was advocating for peace and economic and social justice. She was, of course, concerned by the rise of Donald Trump. But she was also quite certain that New Hampshire and America would reject “that billionaire” in November. Marcia was always confident, even in the face of what she referred to as temporary setbacks.

After the 2014 election, when a number of Republican governors and legislators with ALEC ties were reelected, Marcia was disappointed, but undaunted. “I just don’t understand why all those austerity governors got reelected,” she said. Marcia would shake her head, but she was already smiling, and saying, “All right, then, we’ll get ‘em the next time.”