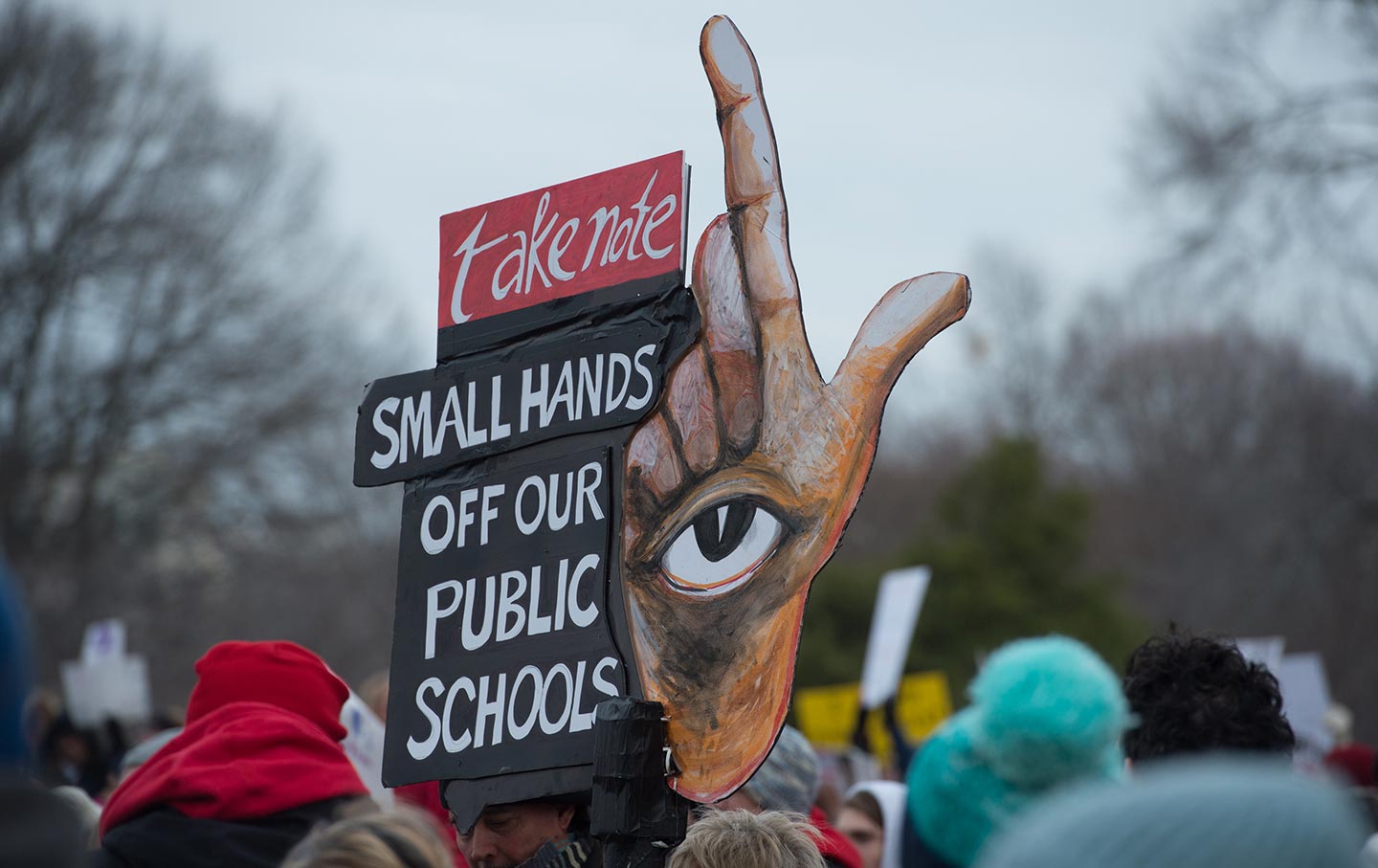 People protesting the possible appointment of Betsy DeVos as the Secretary of Education in Upper Senate Park, adjacent to the Capitol in Washington, DC, January 29, 2017. (Cal Sport Media via AP Images)

The 2016 election altered the balance of power at every level of American government. Beyond elevating the power of the Republican Party, it shifted the balance between public and private control of government. It can be easy to let anger and frustration turn to inaction, especially among young people. The policies implemented today will shape our futures. That’s why thousands of people have stepped up to give their time and money to resist policies that degrade our values of justice, equity, and inclusivity. As we consider the ways that we resist the agenda of the current administration, we would be remiss to ignore privatization.1

Since in the 1970s, politicians have dramatically increased the outsourcing of critical public goods, such as water, education, and energy, to the private sector in the name of efficiency and cost saving. This is privatization. The outcomes of privatization have been far from effective.2

Privatization has encouraged institutions to raise prices while skimping on the quality and reach of service provision. For example, for-profit colleges that enroll 1.6 million American students confer low-quality degrees, often without accreditation, while charging their students exorbitant fees and tuition. In 2016, students graduating from for profit colleges between 2010 to 2013 counted for 26 percent of borrowers yet 35 percent of loan defaults. Privately run prisons rely on contracts with high-occupancy clauses that ensure a steady stream of detainees and profits to their bottom line. Sixty-two percent of ICE beds are run by private contractors. And, as the financial sector increases its influence in the economy, it finds consistently new ways to raise profits from public entities, such as colleges and municipalities. Just one such financial tool, interest-rate swaps, cost 19 universities a combined total of $2.7 billion over the last several years.3

The outcomes of privately run public goods stem from a flawed logic. Public goods are meant to be accessible to anyone, regardless of their ability to pay. Yet, private firms operate to maximize profit by lowering the cost of provision and seeking opportunities to increase cash flow. The practice of privatization ensures that goods that were once accessible and affordable are now unequally and unjustly provided, fueling historic levels of inequality.4

In spite of the glaring failures of privatization, it will reach unprecedented levels in the Trump era. Corporate executives are being appointed to high-level administrative posts despite conflicts of interest. From Betsy DeVos to Tim Price to Mike Pence, many members of Trump’s administration, including 32 members of his transition team, bear close personal or ideological ties to privatization. Important economic sectors regulated by the government, such as health care, will be left to the vicissitudes of the free market. And protections for historically disadvantaged groups will be done away with in the name of personal freedom.5

Young Americans are particularly affected by the selling off of public goods to private actors. Shrinking public accountability in education, the justice system, and the economy at large means that the tenets of the social contract are under attack. We feel it in the high costs of education and the high rates of incarceration we experience. We feel it when the financial sector experiences high levels of profit while we struggle to find decent jobs.6

Fortunately, our generation is also well-equipped to combat privatization and promote the public good. That is why the Roosevelt Institute is launching the Re:Public Project. We are empowering an emerging generation of leaders to work collectively to promote policies that bring back public control and accountability at the local and state level.7

Our approach is three-pronged. First, we are pushing narratives that highlight the pervasiveness of privatization in our education and justice systems. Second, we are training, online and in-person, young people who are ready to fight privatization and promote public control locally. Finally, we are launching a campaign incubator that will help develop and seed promising, youth-led projects that promote public control in the areas of educational, economic, and social justice.8

Through our work, allied with progressive partners and leaders, we hope to promote not just a way to resist harmful policies but to promote a positive vision of what government can be.9