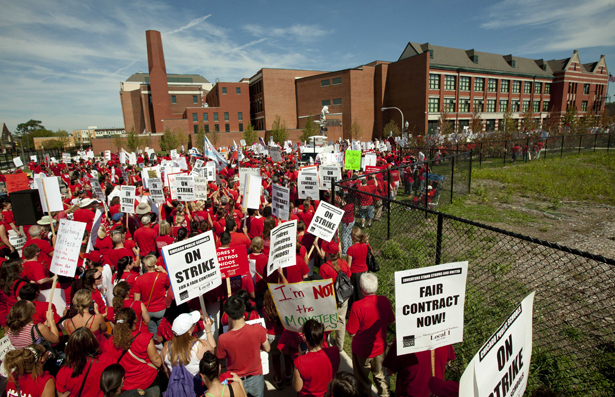 In 2012, public school teachers in Chicago walked off the job for the first time in 25 years. (AP Photo/Sitthixay Ditthavong)

One of the greatest challenges facing American education today is a fantasy, spun by billionaire-funded “think tanks” and often repeated uncritically by politicians and pundits, that our schools are failing, that teachers are shirking their responsibilities and that unions are

the root of the problem. Unfortunately, the peddlers of these distortions have held the microphone for so long that the word “reform” is now associated with the crudest assaults on the very infrastructure of public education.

It’s not that reform isn’t called for. Schools are beset with difficulties, mostly born of the inequalities rampant in the larger society. But, as ought to be obvious, education reform must be in the public interest—on behalf of public schools and the children who attend them—rather than private interests, furthering “the corporate agenda for public schools, which disregards our voices and attempts to impose a system of winners and losers,” to quote the mission statement of a new coalition of teachers and their unions, along with parent, student, religious and community groups. This coalition has set itself the task of nothing less than reclaiming “the promise of public education as our nation’s gateway to democracy and racial and economic justice.”

Backed by the American Federation of Teachers and the National Education Association, as well as national groups like the League of United Latin American Citizens and local organizations like the Philadelphia Student Union and the Boston Youth Organizing Project, this coalition effort—beginning with a national day of action on December 9—picks up the themes of the Chicago Teachers Union strike of 2012, which saw educators and parents unite against school closings. It highlights concerns about resources and classroom energy being diverted to standardized testing instead of kids, concerns that have become a focus of the New York State United Teachers. And it embraces the message of Diane Ravitch, former assistant secretary of education, who argues that the right response to much of what ails public education is a comprehensive anti-poverty agenda that addresses racial and economic inequality by providing healthcare, food and nutrition, and preschool programs that enable teachers to teach and students to learn.

By focusing on a set of “Principles That Unite Us,” organizers are attempting to bridge divisions that too often have been exploited by the privatizers and unionbusters. As Jeff Bryant, an associate fellow at the Campaign for America’s Future who has been active with the Education Opportunity Network, explains it: “Behind nearly every complaint to the education status quo are common grievances about resource deprivation, inequity, public disempowerment, and the widespread perception that governing policies are driven by corruption.”

Of course, shared grievances do not always put those who hold them on precisely the same page. But it is crucial to foster a shared understanding that these very problems are intimately linked to the assault on public education, which is being conducted in the guise of “reform”—and, moreover, that this assault has too frequently placed educators and their allies on the defensive.

The teach-ins, demonstrations and rallies, and ongoing initiatives that will extend from the day of action, will not only challenge cutbacks and closings; they will seek to shift the debate toward broad new commitments to invest in students, teachers and the infrastructure that facilitates learning. The organizers are right to recognize that real reform must proceed from the essential premise that, in their words, “access to good public schools is a critical civil and human right.”

In September, Pedro Noguera wrote about how the latest trend in “school reform” fails children.