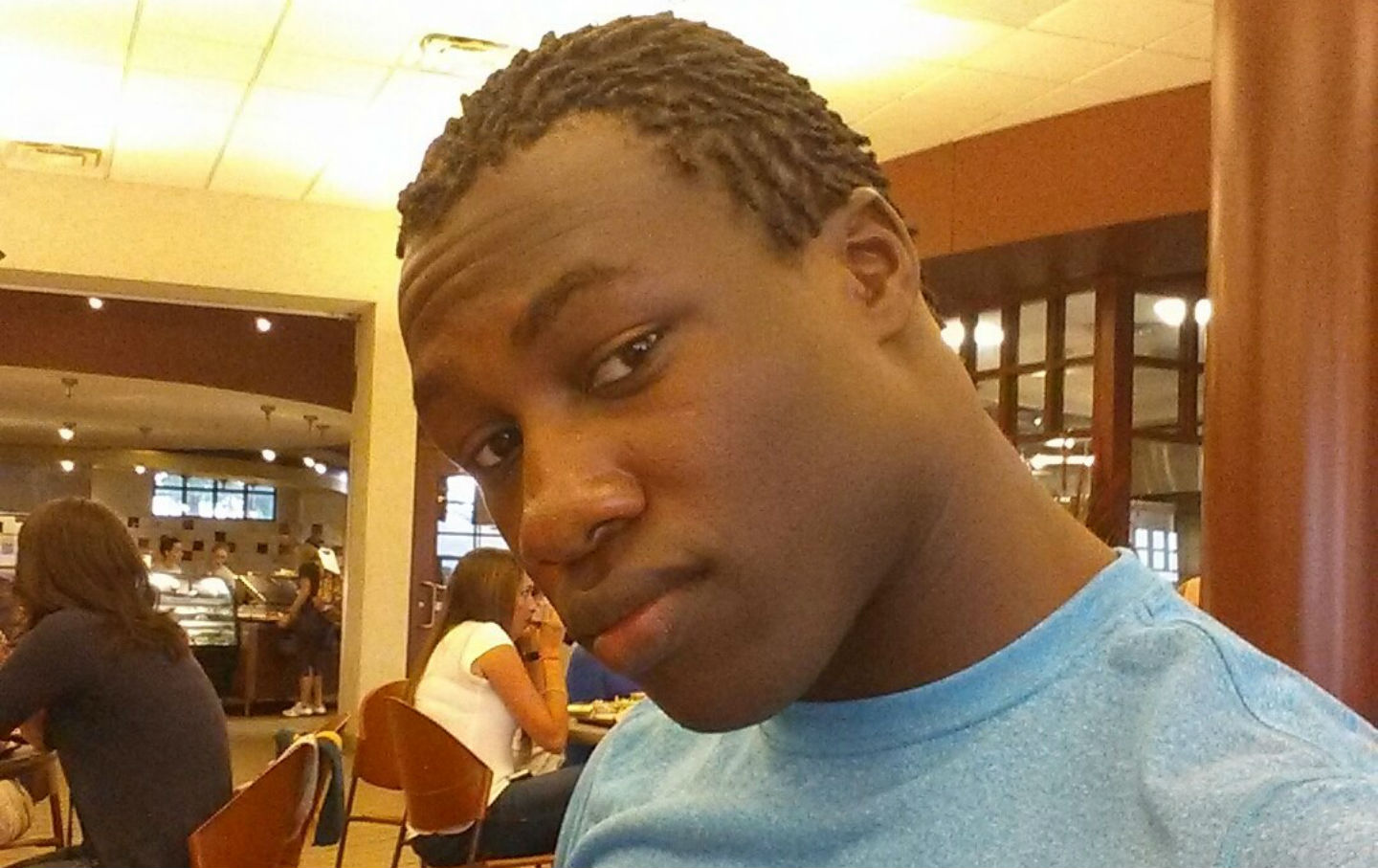 It took just over two hours for a suburban St. Louis, Missouri, jury to recommend Michael L. Johnson serve more than 60 years in prison on May 15.* If Johnson serves that full time, it could become a life sentence for the 23-year-old former student and star wrestler at Lindenwood University in St. Charles. Johnson was convicted of “recklessly infecting” one male sexual partner with HIV and exposing four others to the virus.

Johnson has been HIV positive since at least early 2013 and possibly as early as 2011, according to documentation disclosed at the trial, and prosecutors say he did not reveal his serostatus to sexual partners. That meant Johnson was liable for prosecution under Missouri’s draconian HIV criminalization statute, which essentially categorizes each new infection in the state as attempted murder. “What we have here is a perfect storm of malice,” Assistant Prosecutor Phil Groenweghe told the jurors in closing arguments.

Not exactly. A more nuanced analysis of Johnson’s case reveals instead the “perfect storm” of homophobia, racism and criminal justice that shapes the health of so many black gay men.

Missouri is one of at least 32 states and two territories that criminalize exposure or transmission of HIV, according to the Center for HIV Law and Policy. Some laws penalize having sex even after revealing serostatus to a partner—and regardless if a condom was used. The United States has led the world with “thousands” of such prosecutions, according to the United Nations-backed Global Commission on HIV and the Law.

Most of these laws were enacted at the height of the epidemic in the 1980s and early 1990s—before life-saving antiretrovirals were introduced—and as such they do not reflect modern science, which has made an HIV diagnosis a chronic but manageable condition. For example: The goal of aggressive antiretroviral therapy is to suppress a viral load—the amount of HIV in a sample of blood—to become “undetectable.” Once a positive person has achieved viral suppression, that person is extremely unlikely to transmit HIV to a sex partner. But criminalization laws do not take this into account.

Nor do these laws make sense as a deterrent from supposedly “reckless” behavior. The overwhelming body of research, going back more than a decade, has established that the vast majority of new infections each year are contracted from someone who does not know that they are HIV positive. “Nearly 92 percent” of new infections “likely occur after contact with people who don’t know they carry HIV or do not receive treatment,” according to a February 2015 report by the Centers for Disease Contol and Prevention.

People who are unaware of their serostatus cannot take steps to prevent transmission. Thus the enormous push, from the federal government down to community-based organizations, to create greater access to testing, and to decrease the fear and considerable stigma associated with a positive diagnosis. Less fear means more testing. Criminalization laws—and the headline-grabbing, racially loaded prosecutions such as the one faced by Michael Johnson—directly undermine this effort in the same communities where the epidemic remains most acute. Those communities are disproportionately African American.

Johnson used online hookup apps and social networking sites—such as Grindr and Adam4Adam—to meet several men in early 2013. He and his partners engaged in sex without condoms. One partner eventually seroconverted—that is, he turned HIV positive—and accused Johnson of transmitting the infection. Johnson was arrested and his name was publicized widely. Other men came forward and claimed they had sex with him, too. Johnson says he told them that he was positive. The men claim he did not.

Everything about these interactions seems to have been racialized. Johnson had the physique to match his college-jock status, and his muscular and ripped frame appears to have been a hit on gay social media. He used the nickname “Tiger Mandingo” and reportedly four of the six accusers are white gay men. Once the case broke into the news, the same body that had been revered for its athletic and sexual prowess was instead the subject of racial caricature across the Internet. “Overtly racist blogs, like Chimpmania.com, labeled him an ‘HIV Positive Buck’,” wrote Buzzfeed’s Steven Thrasher in his July 2014 investigation, “How College Wrestling Star ‘Tiger Mandingo’ Became an HIV Scapegoat.”

“The dominant media narrative presented him as a monster,” says Charles Stephens, an Atlanta-based writer, activist and executive director of the Counter Narrative Project, which amplifies the voices of black gay men. “It’s impossible to ignore the racial lens in the Michael Johnson trial,” adds Preston D. Mitchum, a professor of legal writing at Georgetown University. “A black man who is muscular and attractive is accused of not disclosing his status to mostly white accusers. The trial is being heard by an almost entirely white jury. The constant repetition of the name ‘Tiger Mandingo.’ It is a deliberate strategy to say, ‘This is a brutal black man who did this intentionally to these precious, young, white accusers.’ ”

Sensational media depictions of black men as so-called “HIV predators” are sadly familiar. NuShawn Williams was accused of having sex with dozens of women after testing positive in 1996, in a case that led to a New York law requiring doctors to report the names of people who test HIV-positive. Other states followed suit. College basketball player Nikko Briteramos received international attention in 2002 when he became the first person arrested under a South Dakota law requiring that HIV-positive persons disclose their serostatus to prospective sexual partners.

The media coverage leading up to the Johnson trial was so racially charged that a group of black gay men—thought leaders, academics, HIV policy experts, writers and more—published an open letter to Michael Johnson. The letter was ultimately signed by 115 men, led in part by Stephens, and published at Mused Magazine on May 7. It’s worth quoting at length,

…HIV should be treated as a public health issue not as a criminal one. Legally requiring disclosure privileges the lives of White people not living with HIV over Black people who are living with HIV.

These laws feed into stereotypes that assume Black gay men are irresponsible and hypersexual. For you, your accusers saw your Black and masculine body as a site of ultimate sexual pleasure, until they had to deal with you as a whole person. At that moment you became a problem and were disposable to them. … We care about you—your life matters. HIV is not a crime and you should not be in prison.

“Part of the desire was to humanize Michael Johnson,” Stephens explains. “That is very important because so many black gay men experience a significant amount of disconnection and isolation which contributes to despair. That speaks to how homophobia and racism converge in our lives.”

Stephens adds that Johnson represents the kind of person too often left out of LGBT politics, with its modern focus on marriage rights. “We [must] resist a certain kind of ‘respectability activism’ and get involved with black gay men who do not have perfect stories.”

African-American and other black communities represent only 14 percent of the nation’s population but account for nearly half—some 44 percent—of all new HIV infections. And for many years, new infections have been increasing the fastest among black gay and bisexual men. The trend is particularly sharp among young men and in the South.

Black men and women also appear to be more likely to be prosecuted under HIV criminalization statutes. Race-specific analyses in each state are not available, but some research demonstrates the trend. Michigan’s HIV criminalization laws produced “an overrepresentation” of black men “and an underrepresentation of White men with male partners among those convicted,” according to a study conducted by Trevor Hoppe, a University of California at Irvine sociologist. HIV-exposure cases often feature the same kind of racial disparities and overly aggressive prosecution—such as harsher charges, penalties and sentences—that critics have noted in other elements of the criminal justice system. For instance, in 2009, a black, HIV-positive gay man in Michigan faced bio-terrorism charges after he allegedly bit another man during a fight. Biting and spitting cases pose very little threat of HIV transmission. That case was eventually dismissed.

“These laws exacerbate stigma against HIV-positive people,” said Hoppe. “They are not decreasing new infections. They are not incentivizing disclosure. It could be just the opposite, and many people fear that it encourages not disclosing.”

Michael Johnson’s trial was held in the St. Louis suburb of St. Charles, which is more than 90 percent white. Johnson was tried and convicted before an almost all-white jury that included jurors who believed that “homosexuality is a sin,” reported Buzzfeed’s Steven Thrasher.

The trial also took place less than 10 miles from another town that has symbolized racial oppression in recent months: Ferguson. Johnson’s defenders have drawn a line back to the Black Lives Matter movement that gained national attention there. “HIV criminalization is anti-Black violence. Period,” Charles Stephens told Mic.com senior editor Darnell L. Moore. “You can’t be against the ‘prison industrial complex’ without being against HIV criminalization. You can’t ignore the fact that the communities most vulnerable to HIV are also the communities most vulnerable to criminalization. We must fight the clinic to prison pipeline.”

“HIV criminalization is part of the larger story around how the prison industrial complex incarcerates black people,” adds Kenneth M. Pass, a graduate student in public health at the University of Michigan who has organized online around Johnson’s case and was another lead signor of the open letter. “Instead of leading [people with HIV] into care, we would rather lead them into a prison.”

Editor's note: A previous version of this article stated incorrectly that the jury sentenced Michael Johnson on May 15. Rather, the jury recommended a sentence; the judge will ultimately decide Johnson's sentence.