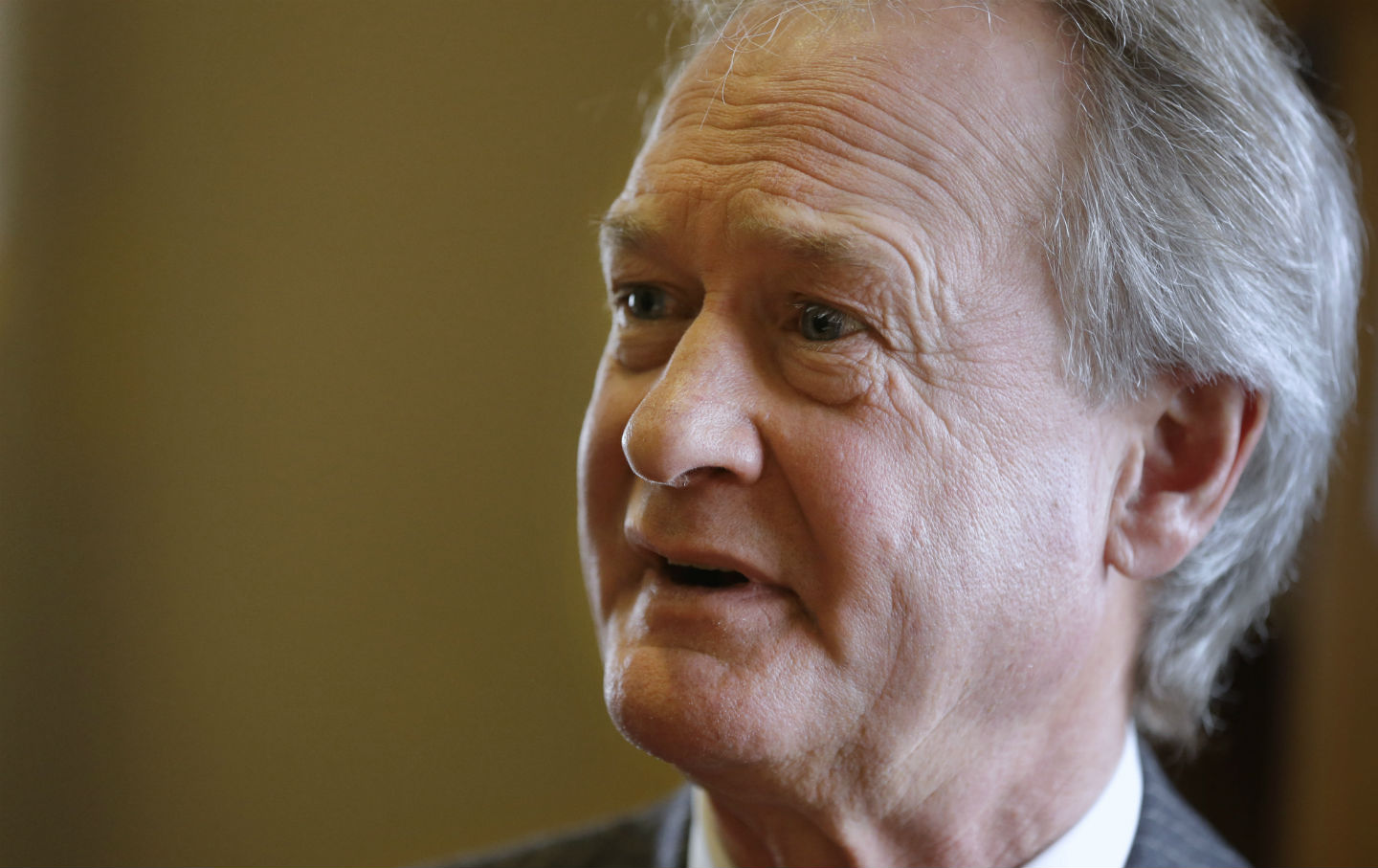 The former Republican senator and independent governor of Rhode Island, who is very seriously exploring the prospect of challenging Hillary Clinton for the 2016 Democratic presidential nomination, said Iraq should be an issue.

Then Chafee got specific. He brought up the votes that he and Clinton cast in 2002, as members of the US Senate, on whether to authorize President Bush and Vice President Cheney to steer the United States toward war with Iraq.

Chafee, then sitting as a Republican, voted with Senators Russ Feingold, Paul Wellstone, and twenty others to block the rush to war.

Clinton, sitting as a Democrat, voted with Senator John McCain and 75 others to give Bush and Cheney their blank check.

Chafee calls that Clinton’s vote “the biggest mistake of many” on issues of foreign policy by the presumed frontrunner for the 2016 Democratic nomination.

“I don’t think anybody should be president of the United States that made that mistake,” he told The Washington Post. “It’s a huge mistake and we live with broad, broad ramifications today—of instability not only in the Middle East but far beyond and the loss of American credibility. There were no weapons of mass destruction.”

Chafee has raised the Iraq issue as Clinton is preparing to make an earlier-than-expected announcement of her candidacy on Sunday. In so doing, the prospective challenger to Clinton has recalled what was once—and what could still be—the greatest vulnerability of the former secretary of state. Hillary Clinton has a reputation, and a record, as a hawk when it comes to wars and military adventures abroad.

But will that reputation and record be “disqualifying” in 2016?

There is little question that Iraq was an essential issue for Illinois Senator Barack Obama in 2008, when he challenged Clinton for that year’s Democratic presidential nomination. Obama and his backers highlighted the fact that—as an Illinois state senator—he had delivered an anti-war speech in 2002. That went a long way toward distinguishing a relative newcomer to national politics from the former first lady and two-term senator.

Of course, 2008 was a different election. Bush was the sitting president, and there were roughly 150,000 US troops on the ground in Iraq. But the challenge that Obama raised then, and that Chafee raises now, was about more than one war, It was also about judgment, and a vision of foreign policy. “We’ve been having the muscular approach that isn’t smart in the long term,” says the former senator, who suggests that he is more in the “brains over biceps” camp than Clinton.

Chafee is not alone in expressing concerns about how a President Clinton would strike the balance between militarism and diplomacy. As she prepares a 2016 candidacy that begins on a strong strategic and structural footing, Clinton remains vulnerable with a party base that is more anti-war and more economically populist than party elites.

While other potential Clinton challengers have been cautious about criticizing the front-runner, Chafee is not. He’s taking swipes at Clinton on economic issues, campaign finance concerns, and how the Clinton Foundation operates—and he’s even noting that, while, yes, he was once a liberal Republican, Clinton was once a supporter of conservative Republican Barry Goldwater.

“I am not naive about the task, but I think there is a strong stream of Democratic primary voters that would like some choices. I do believe that,” says Chafee. “I am not naive about the amount of money already the Clinton campaign has amassed and support, but it is a long marathon of a race and I am very confident that there are questions that need to be asked and I want to be asking them.”

Chafee, who backed Obama in 2008, is not the Obama of 2016. He is a relative newcomer to the Democratic Party with a reputation as a maverick. Yet the questions he raises are serious ones. Clinton needs to face them, and answer them. Just as she needs to face and answer the questions about income inequality, wage gaps, and trade policy that a challenge from Senator Bernie Sanders might raise.

Clinton is the Democratic front-runner, the leader in every national poll and in the polls from early caucus and primary states. Her campaign will seek to foster a sense of inevitability.

But even those who support Clinton should recognize the lesson of 2008: “Inevitability” does not always translate into reality. And Democrats who believe Clinton will be their nominee should recognize something else: She will face questions about her record. Those questions will either come in a spirited primary process, or they will come in a fall race with a Republican. Lincoln Chafee is raising the toughest questions now. That is not merely appropriate, that is practical and necessary—for Clinton and for the Democratic Party.