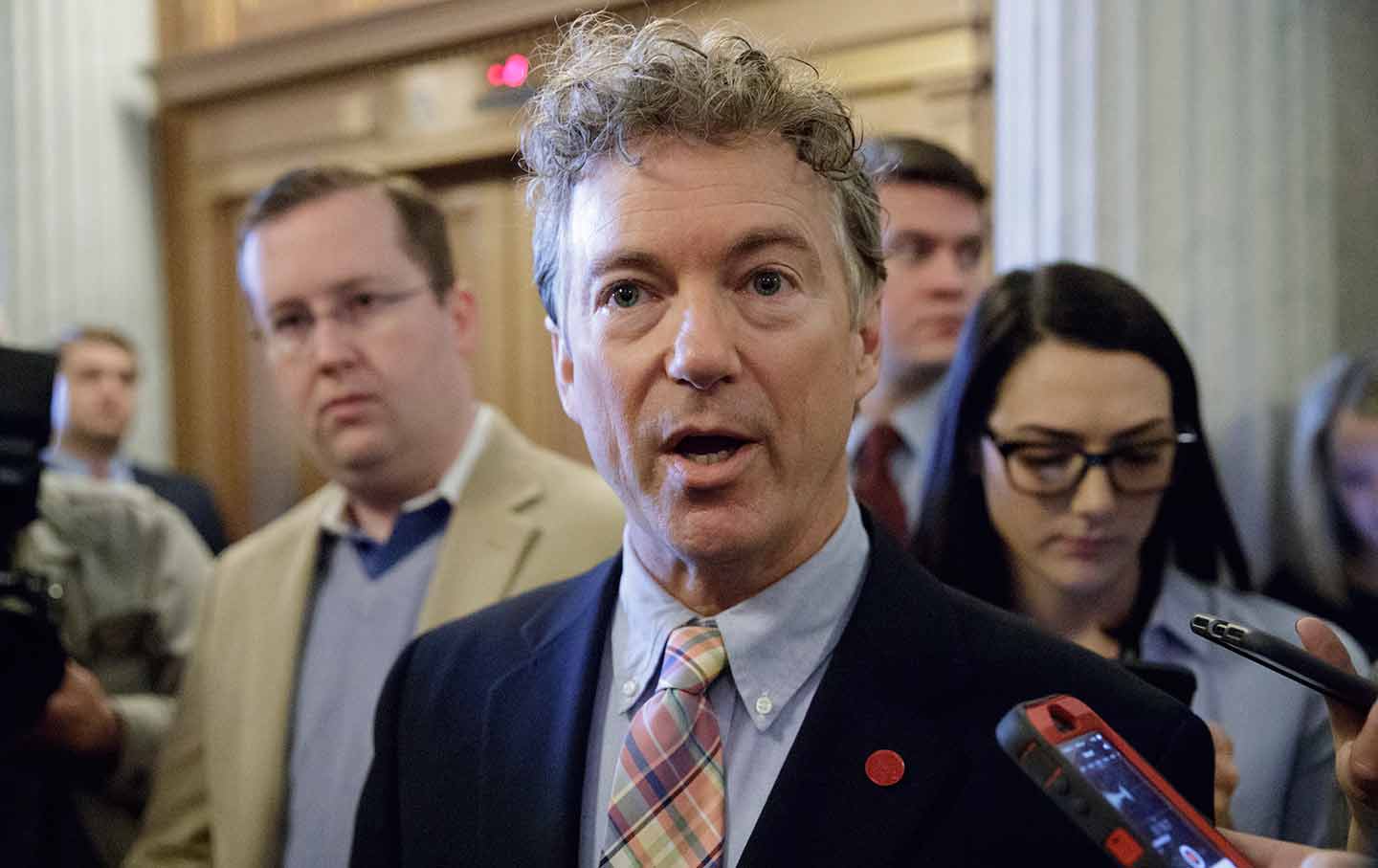 There can be no doubt that it is unconscionable for President Donald Trump to promote $110 billion in new arms sale to Saudi Arabia—a country that Human Rights Watch notes “has repeatedly used US weapons in attacks that are likely [to] constitute war crimes.”

But it is also unconscionable for members of Congress, especially Democrats, to aid and abet Trump’s wrongdoing.

Trump’s alliance with the Saudis—which renews the worst of past US practices and extends them at a point when Riyadh is engaged in a brutal assault on the people of Yemen—must be scrutinized, checked, and balanced by the House and Senate. But that will only happen if Democrats form a united front and side with responsible Republicans to prevent arms sales to the Saudis. On Tuesday, 47 senators voted to block a substantial portion of the arms deal the president has promised the Saudis. Unfortunately, 53 senators, including five Democrats, sided with Trump.

That a majority of senators would turn a blind eye to what is happening in Yemen is horrific. That a group of Democrats who join that majority, at a time when a number of Republicans are saying “no” to Trump, is indefensible.

“We have a chance to tell Saudi Arabia we’ve had enough.”—@RandPaul urges Senate to block arms for Saudi Arabia

The issues that are in play are not a close call.

“Human Rights Watch has documented 81 apparently unlawful coalition attacks over the last two years, many possible war crimes. In almost two dozen of these cases, including the attack on the funeral hall, we were able to identify the US weapons that were used,” the international monitoring and advocacy group reported in March. “According to the United Nations, at least 4,773 civilians have been killed and 8,272 wounded since this conflict began, the majority by coalition airstrikes. The war has driven Yemen, already the poorest nation in the Middle East, toward humanitarian catastrophe. Both the coalition and Houthi-Saleh forces have blocked or restricted critical relief supplies from reaching civilians. Seven million people face starvation, and cholera ravages parts of the country.”

The concern about US arms sales to the Saudis is widespread among human-rights groups.

“Two years of conflict have forced three million people to flee their homes, shattered the lives of thousands of civilians and left Yemen facing a humanitarian disaster with more than 18 million in desperate need of assistance. Yet despite the millions of dollars’ worth of international assistance allocated to the country, many states have contributed to the suffering of the Yemeni people by continuing to supply billions of dollars’ worth of arms,” says Lynn Maalouf, who serves as deputy director for research at Amnesty International’s Beirut regional office. “Weapons supplied in the past by states such as the UK and USA have been used to commit gross violations and helped to precipitate a humanitarian catastrophe. These governments have continued to authorize such arms transfers at the same time as providing aid to alleviate the very crisis they have helped to create. Yemeni civilians continue to pay the price of these brazenly hypocritical arms supplies.”

Recognizing the madness of providing the Saudis with more weaponry—and justifiably concerned that officials in Riyadh will take from the approval of increased arms sales a implicit signal of US approval for more warfare and killing—Kentucky Senator Rand Paul broke with Trump and launched a move to block Trump’s morally reprehensible choice.

Displaying a picture of a child who was killed in Yemen, the Republican senator pleaded with his Senate colleagues to prevent Trump and his Saudi allies from making circumstances on the ground dramatically worse. “One group said that the impending famine in Yemen may reach biblical proportions—think about that. It is astounding what is being done,” said Paul, who declared that “we will force this vote for these children in Yemen because we have a chance today to stop the carnage. We have a chance to tell Saudi Arabia we’ve had enough.”

The senator’s impassioned argument won support from across the political spectrum. Teaming with Connecticut Senator Chris Murphy, a Democrat who has often taken the lead on human-rights issues, Paul succeeded in generating a historic level of opposition to giving a blank check to the Saudis.

The determination of those Democrats to back Trump’s Saudi agenda is shameful. They are aiding and abetting not just an irresponsible and wrongheaded Republican president but policies that are likely to lead to significantly more death and more suffering.

“Numbers like these in the Senate, historically reluctant to adopt measures that could potentially damage the US-Saudi alliance, show the tide is shifting,” explains Alexandra Schmitt of Human Rights Watch. “This level of bipartisan support for this resolution could be a game changer and is hopefully the beginning of the end to US cooperation in Saudi-led coalition abuses in Yemen. The Senate should keep up pressure on the Trump administration until the Saudis end their unlawful attacks and credibly investigate the scores they have already conducted.”

That’s right. Responsible members of the Senate and the House should keep up pressure on the thoroughly irresponsible Trump administration.

At the same time, Americans of all political backgrounds should keep up pressure on the members of Congress who empower this president—especially those Democrats who align with a Trump administration that shows so little regard for human rights and human life.