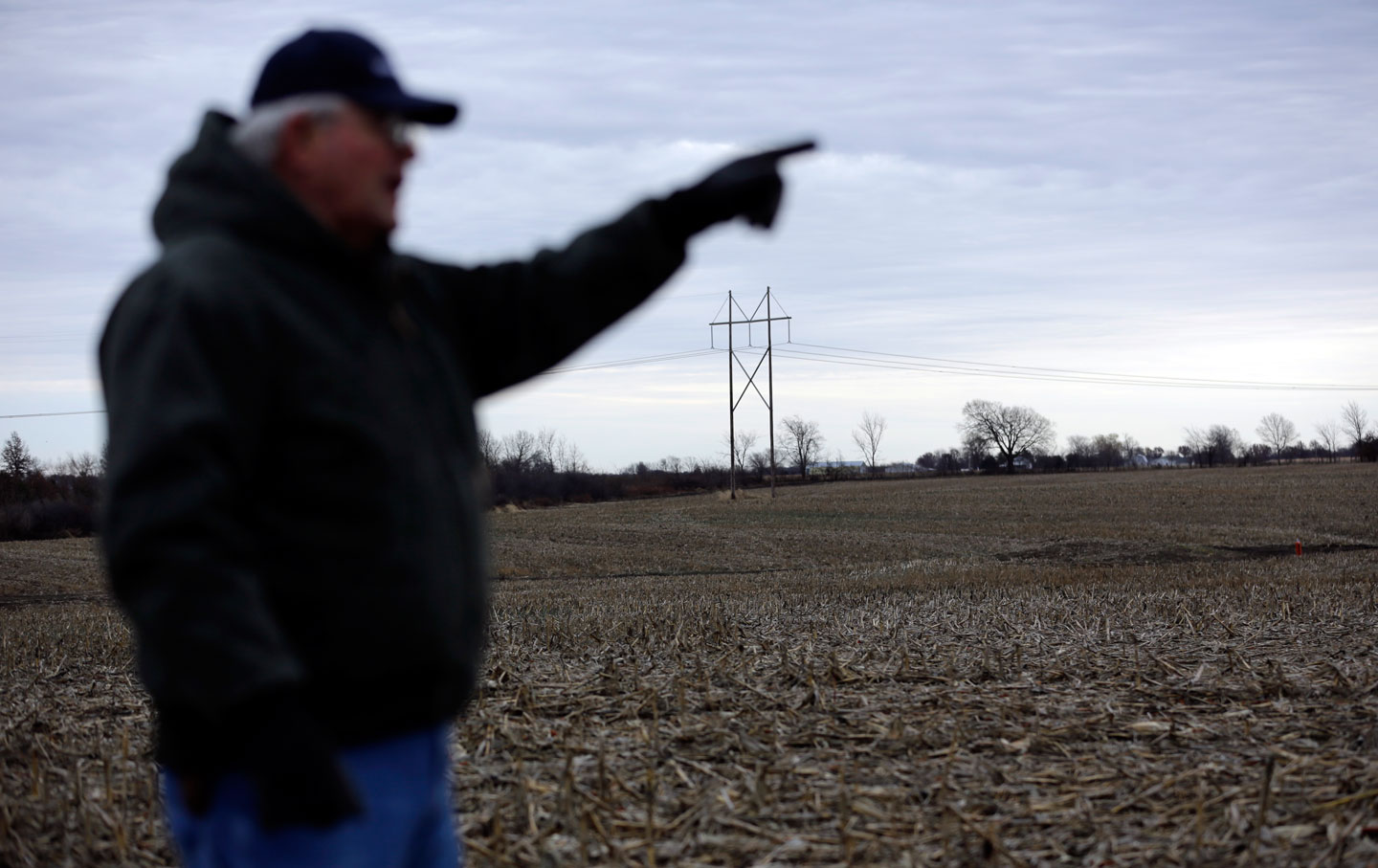 Wayne Wilcox stands in front of an existing electric line as he points out the planned route of a proposed high-voltage line that would carry renewable energy across his farm in Moberly, Missouri. Wilcox supports the plan, saying it's important to both the local and national economy. (AP Photo / Jeff Roberson)

Lexington, Kentucky—There was a time when Kansas was a hotbed of populist sentiment, organizing, and politics. Now it has Sam Brownback, the governor who seems most determined to answer the question, “What do you give to the man (men) who has everything?” Kentucky and West Virginia, where thousands of miners fought for and won critical battles for better wages and justice in the workplace, are now deeply “red,” even including most of their Democratic legislators. North Carolina—a beacon of hope for progressives in a region otherwise overwhelmingly and increasingly right-wing—abruptly flipped in 2012 and is now a model pupil of the American Legislative Exchange Council.

Why have rural communities moved so far to the right? Why have farmers, miners, drillers, loggers, and a host of other working folks become so enthralled with the antigovernment, anti-environmentalist, and antilabor pundits and politicians? Many folks, of course, have written extensively about this, including Thomas Frank (What’s the Matter with Kansas?; Pity the Billionaire) and Joan Walsh (What’s the Matter with White People?). We know from Frank, Walsh, and many others at least some of the reasons, from the relentless propaganda of Fox News and conservative talk radio, to the right’s timely and well-funded co-opting of public anger over the economic crash and bank bailouts of 2008–09. Dark Money, Jane Mayer’s recent book, provides further detail, a chronology of how such a comprehensive, patient plan to change the narrative was developed and funded. And multiple commentators have taken advantage of the presidential campaign season to highlight how the Democratic Party has steadily moved towards Wall Street and away from working people, at least since Bill Clinton. In short, we know a good bit about how the right has achieved such power and influence over the past 40 years, including shifting the so-called political center to something Ronald Reagan would embrace.

But there’s another, much-less-discussed factor in this shift: the near-complete absence of the “rural” among the priorities, policies, and leaders on the other side, i.e., in the progressive movement. By rural, I mean the people, their communities, the predominant livelihoods, and the culture and language of these places. The plain fact of the matter is that, excepting recent transplants from the cities, most rural people see progressives as elitist, dismissive of their concerns, largely ignorant of both their problems and their contributions to the nation. And too often, living “in their head” rather than getting their hands dirty. Unfortunately, this is mostly correct. As Dee Davis, founder and president of the Center for Rural Strategies said to me, “If I’m stuck in a ditch on the side of the road, is a progressive going to jump into the mud and help me push, or is he going to go home and issue a white paper?”

Examples of the invisibility of country people and their concerns within the progressive agenda abound. The 2015 “Good Jobs for All” report, for example, begins with a call for “an aspirational agenda” that will “galvanize a broad-based coalition…that will put the voice and agenda of struggling Americans at the center of a new national debate.” In the more than 50 pages that follow, many good and thoughtful policy proposals are put forth. But the words “farm,” “farmer,” and “agriculture” are never mentioned, and “rural” is alluded to only once or twice, in the context of USDA programs. Mind you, there are plenty of “struggling Americans” living in the countryside. While there’s good stuff in this report, somehow the authors don’t even think of country people when they imagine a “broad-based coalition.”

Or we could look at the priorities and recommendations of the leading progressive economic and political organizations in the country. I follow the work and reports of many of these groups, reading as much as I can in the realm of new models, workplace democracy, next systems, and the like. Some fascinating visions are being discussed, some innovative ideas and strategies being tested and evaluated. But almost never do I see a rural person (let alone a farmer) leading the discussion, nor an innovative country-based social enterprise as the focal point. Not that we lack for country people who could be leading such discussions, highlighting innovations, or presenting elements of new models and systems. Some of us even talk pretty good. But that ain’t opening many doors (with some notable exceptions).

Part of the issue, I think, is that liberals and progressives default to the triage approach: that is, we focus our priorities and resources on the places we can win or at least win over. I experienced that when I ran for Congress in 2012 on a very progressive agenda. We met with folks at the Democratic National Committee, and they seemed genuinely impressed with both our platform and our campaign. But because I live in a very rural, red area, the DNC decided it was hopeless, and not a dime was offered to the campaign. In spite of that, we fared best—approaching 45 percent of the vote—in the coal counties, where rural jobs and livelihoods were most in decline. If it turns out that if your words and actions make sense to people and honor their experiences, they’ll get behind you. Even in the country.

I’m fortunate to work with many communities across the country working to build a healthier, stronger economy, from the bottom up. I work in a lot of places, but more in the countryside, and in so-called red states. I suppose that, at one level, the sheer abandonment of these communities by big business and by progressives with big solutions has helped foster some of the creativity and resourcefulness that’s becoming so widespread. Necessity is, after all, the mother of invention.

If the goal truly is to “galvanize a broad-based coalition” inclusive of rural areas, how do we get there? Bernie Sanders’s message has resonated in many rural communities and among working people—substantiating my own experience as a candidate four years ago, and, in private conversations with progressive allies, I’m beginning to hear some openness to their concerns. More to the point, the New Economy Coalition, comprised mostly of urban organizers and activists, has welcomed a rural track we’ve organized at Common Bound, their national gathering this July. But at this point in our nation’s economic and political trajectories, both of which are decidedly downward, the time is long past for progressives—people who believe in justice, fairness, and sustainability—to open their doors, widely, to rural people. The bottom-up economies emerging in these places deserve that attention, and the progressive movement urgently needs their involvement.