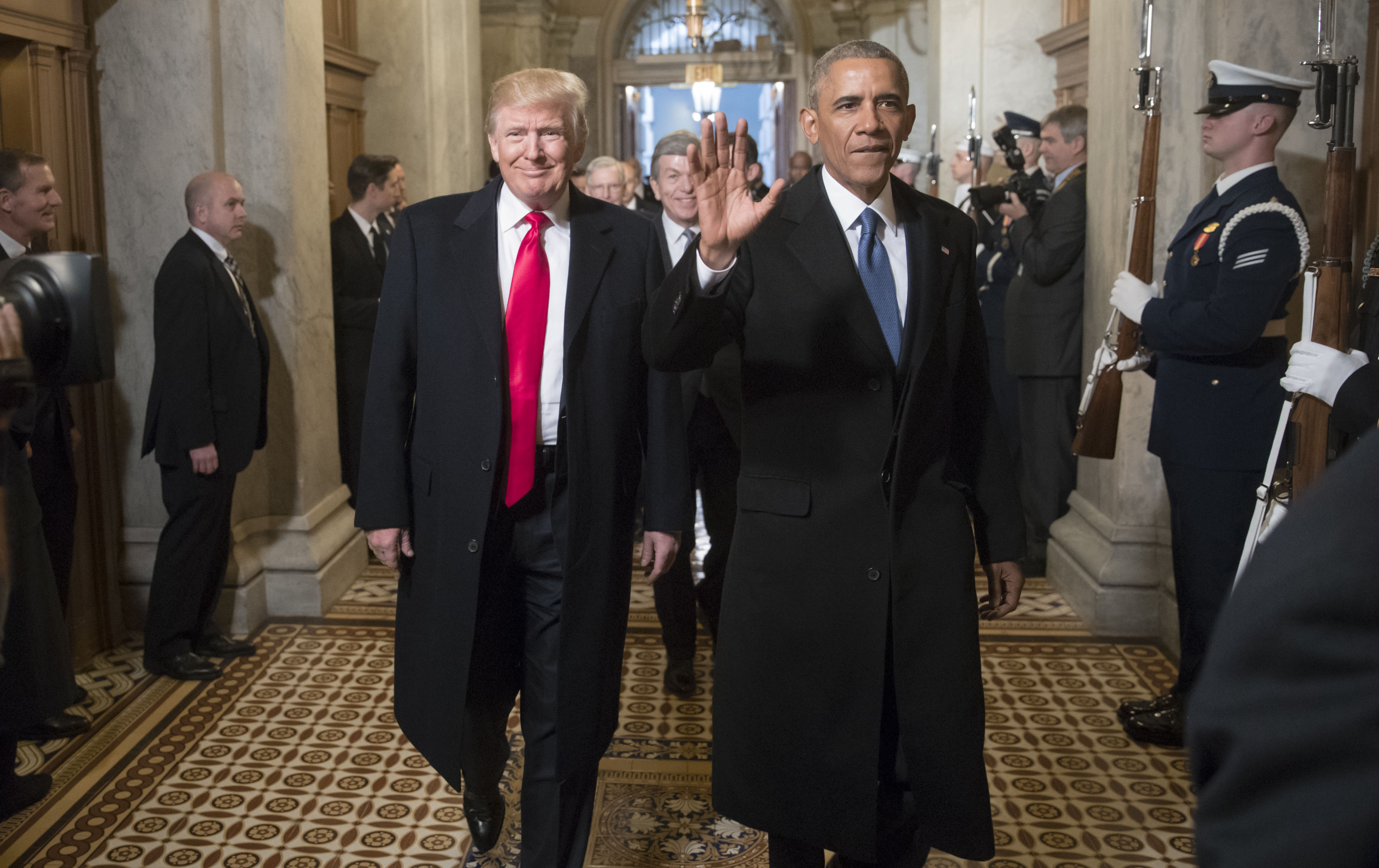 The final tweet from the White House of President Barack Obama was a celebration of accomplishment and a declaration of solidarity.

Yes we can.
Yes we did.
Thank you for being a part of the past eight years.

Accompanying that message was a photograph that conveyed an even more powerful message: an image of President Obama and first lady Michelle Obama marching hand in hand with Congressman John Lewis.

The struggle for a just America and a fair America, an inclusive America, and a generous America continues.

Just hours before Obama would participate in the peaceful transition of presidential power to Donald Trump, the outgoing president used social media to embrace the civil-rights icon whose decision to boycott the Trump inauguration ceremony made him the most prominent face of the resistance to Trump’s presidency.

When Lewis announced that he would not attend the inauguration because “I don’t see this president-elect as a legitimate president,” Trump reacted bitterly. The president-elect dispatched a series of crude and dismissive tweets—including one that suggested that the man who was brutally beaten as he campaigned against segregation in the 1960s was “All talk, talk, talk—no action or results.” Some members of Congress who had planned to attend the swearing-in ceremony announced that they would join Lewis in boycotting it. This was certainly not, by any means, the only show of resistance to Trump. But it was a formal, and widely noted, expression of that resistance.

The congressional boycott grew into an unprecedented protest. More than 60 House Democrats were not in attendance as Trump delivered a dystopian inaugural address, in which he imagined a nation rocked by crime, joblessness, and “American carnage,” where “the wealth, strength and confidence of our country has dissipated over the horizon.”

Even as Trump praised the Obamas for their graciousness during the transition process, the new president’s speech perpetuated the ugliest Republican spin of the past eight years—echoing the conservative fake-news fantasy that the United States fell apart on Barack Obama’s watch.

Trump’s intellectual dishonesty, historical revisionism, and cruelty proved to be too much for dozens of elected Democrats.

Obama did not embrace their boycott. Asked about it during his last White House press conference, the outgoing president said, “With respect to the inauguration, I’m not going to comment on those issues. All I know is I’m going to be there. So is Michelle.” Obama declined to say whether he agreed or disagreed with the boycott, or with the concerns expressed by Lewis and the participants in the protest.

But Obama finished his presidency by signaling his regard for John Lewis, highlighting the congressman’s heroic legacy by posting that photo of the Obamas clasping hands with the civil-rights icon on the 50th anniversary of the Selma-to-Montgomery marches.

When he spoke two years ago to mark that 50th anniversary, Obama said of the civil-rights struggle of the 1960s: “It was not a clash of armies, but a clash of wills; a contest to determine the true meaning of America. And because of men and women like John Lewis, Joseph Lowery, Hosea Williams, Amelia Boynton, Diane Nash, Ralph Abernathy, C.T. Vivian, Andrew Young, Fred Shuttlesworth, Dr. Martin Luther King Jr., and so many others, the idea of a just America and a fair America, an inclusive America, and a generous America—that idea ultimately triumphed.”

The contest to determine the true meaning of America is ongoing. The vision for which John Lewis and Barack Obama marched faces unexpected and unsettling challenges. But the dream has not died. The resistance to Trump and Trumpism is real. The struggle for a just America and a fair America, an inclusive America, and a generous America continues. This idea, this ideal, will again triumph.