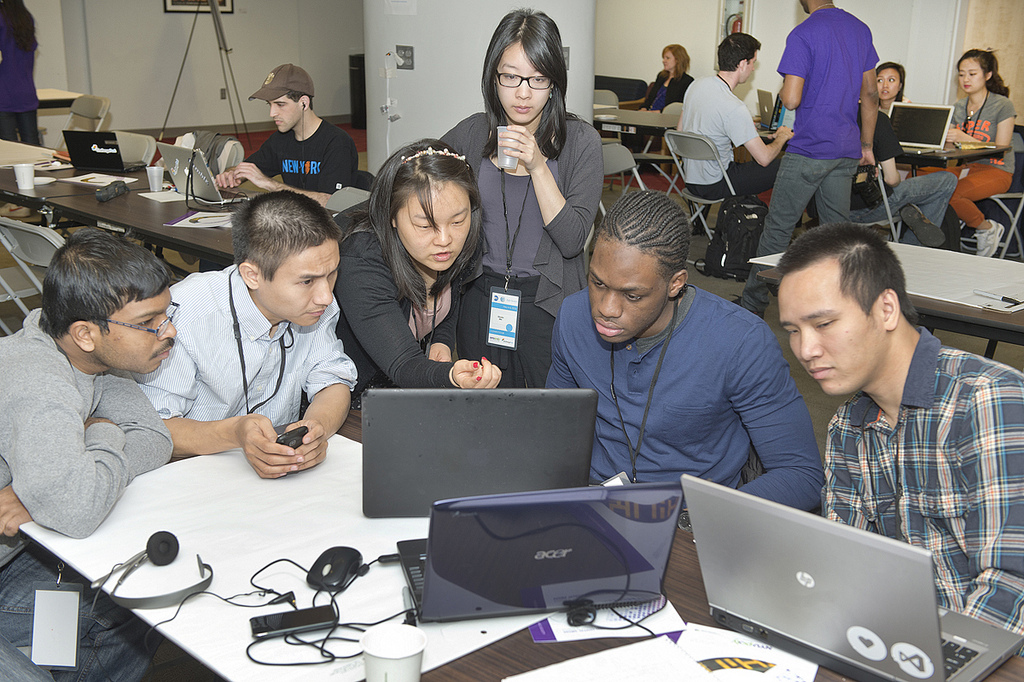 Students participate in a "hackathon" put on by NYU Polytechnic, the MTA, and AT&T. (Creative Commons, photo: MTA/Patrick Cashin)

When The New York Times recently exposed the abusive treatment of construction workers at NYU’s Abu Dhabi campus, people all over the world reacted with disgust to a growing pattern at NYU: employing what the university calls “innovation” on the backs of low-wage, precarious workers. While the NYU Abu Dhabi situation has received well-deserved attention, a lesser known example of worker-exploitation exists right here in New York City, at the NYU-Polytechnic School of Engineering. Touted by university administrators and city officials alike as a hub of economic development, much of this innovation happens through the creative, hard work of hundreds of low-wage graduate student employees engaged in cutting-edge experimental research ranging from solving urban transportation problems to developing improved medical technologies, clean energy technologies and storm resilience.

At Poly, new research and patents have generated $250 million and 900 new jobs for the New York City economy and helped bring around $20 million a year to NYU in research grants and contracts. NYU has compiled a long list of international conference presentations, grants, awards and more achieved in the recent past by Poly researchers, many of them graduate students, but the graduate student workers who help make those projects happen for the university, the city and beyond get paid as little as $10 per hour and are struggling to make ends meet on low wages and non-existent benefits.

Unlike the workers at NYU Abu Dhabi, however, graduate employees won the right to collective bargaining through the Graduate Student Organizing Committee/UAW (GSOC/UAW) and have been engaged in negotiations with NYU for a first contract since February. Unfortunately, the administration has so far failed to put an offer on the table considered fair by student organizers and more than 1,000 NYU and Poly GSOC/UAW members have signed a letter demanding that NYU raise graduate employee wages and greatly improve access to health benefits.

The fact that NYU makes graduate student workers at Poly pay for healthcare and tuition—over $18,000 per semester—is particularly egregious because at NYU’s Washington Square campus the majority of graduate students don’t have to pay any fees when they work as teachers and researchers alongside their studies. If NYU is really so proud of what we do as graduate workers, it should stop treating those of us at Poly like second-class members of our own university.

It gets worse. Many student workers at Poly are international students, primarily from India and China, who travel across the world to pursue a Master’s degree and who on occasion must resort to working under the table for restaurants and gas stations to make ends meet because their visas make it legally challenging for them to work off-campus. International students are often referred to Poly by “educational consultants” who help them apply to the school in exchange for a large fee, which renders them highly vulnerable to the fear that if they complain about anything, they risk having their financial aid packages revoked.

After the Abu Dhabi scandal broke, NYU issued a poorly written apology to the workers. At Poly, workers have the opportunity to win something much better, a legally binding contract with fair wages and benefits that would enable Poly to actually become the global center for innovation that NYU claims it to be, and that we all want Poly to be in reality.