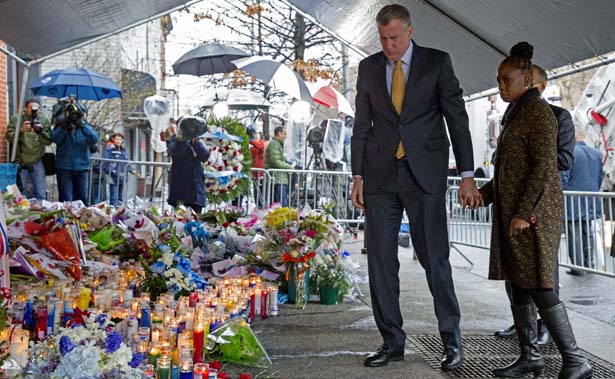 Shock, horror, grief: that’s the gamut of emotions most New Yorkers felt when they heard how Ismaaiyl Brinsley, a troubled, itinerant 28-year-old most recently from Georgia, had come to our city to fire four bullets into the police car occupied by officers Wenjian Liu and Rafael Ramos in Bed-Stuy, Brooklyn, killing both on December 20. And that’s what most leaders expressed as well, including Mayor Bill de Blasio, who conveyed his condolences to the bereaved families and called the murders an “attack on all of us.” Gwen Carr, who lost her son Eric Garner after a New York City policeman put him in a chokehold last July, said, “We are going in peace, and anyone who’s standing with us, we want you to not use Eric Garner’s name for violence, because we are not about that.”

Police-union leaders and their allies, however, chose this moment to talk not of peace but war. “The mayors hands are literally dripping with our blood because of his words actions and policies and we have, for the first time in a number of years, become a ‘wartime’ police department. We will act accordingly,” declared a now-infamous memo attributed to the Patrolmen’s Benevolent Association. The PBA disavowed the memo, but its president, Patrick Lynch, clearly relished its imagery, speaking of “blood on the hands” repeatedly to reporters. Joining this twisted chorus were, among others, former NYPD commissioner Ray Kelly and former governor George Pataki, who called the killings “a predictable outcome of divisive anti-cop rhetoric” of Eric Holder and Bill de Blasio.

Where to begin? If anyone’s words could have a dangerous “predictable outcome,” they are those of Lynch, Pataki, Kelly and others, whose inflammatory statements contradict the message they otherwise seek to send: that the police are not the enemy but serve to protect the public. Of course, this is not how New Yorkers of color have experienced policing in the era of stop-and-frisk, which Mayor de Blasio pledged to end. Indeed, Lynch may have provided a service of sorts in so clearly articulating the occupying-force mentality that the protesters have been denouncing all along.

Anti–police brutality activists across two boroughs sang “This Little Light of Mine” as they joined mourners in the streets. The mayor called on them to suspend the protests, but activists insist that, in the words of Pete Haviland-Eduah of Million Hoodies, “what happened in New York is not part of our movement…. we’re not telling people not to demonstrate.” Committed to ending senseless killings of people of color, activists now stand unfairly accused of creating a climate of violence. NYPD Commissioner Bill Bratton went so far as to state that “the targeting of these two police officers was a direct spinoff of this issue of these demonstrations.”

Outrageous as it is to blame democratic protests for the singular act of a mentally ill individual, it’s also true that highly charged political debates sometimes attract unstable, paranoid and untreated minds. But Brinsley has more in common with Sydney hostage-taker Man Haron Monis, or schizophrenic abortion-clinic shooter John Salvi in 1994, than he does with peaceful protesters against police violence. If anything, this tragedy is a reminder of why the underlying issues in this debate are so urgent—why good policing is tied to gun control and a better mental-health safety net; and why a new contract between police and communities is necessary. For the protest movement, it’s both good policy and good politics right now to focus on specific demands: abandon “broken windows” policing, abolish arrest quotas and push for independent prosecutors when abuses occur. Those are reforms that will help keep everyone safe.