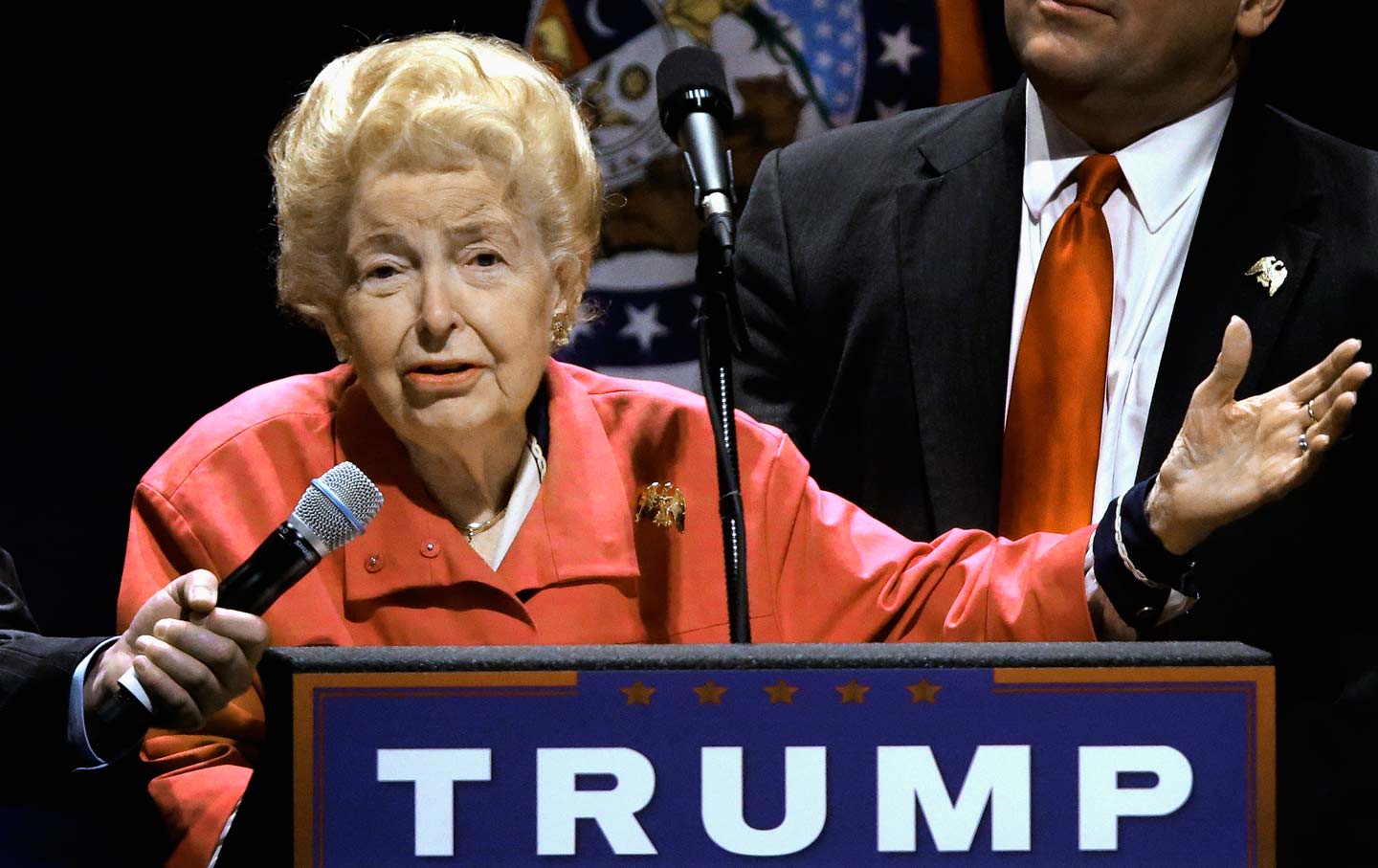 The notion that a nefarious “alt-right” movement has somehow imposed itself on an otherwise innocent and honorable Republican Party is a comic construction that would not have been possible before the dawn of memory-free political analysis. Despite what embarrassed Republican party stalwarts, Democratic talking-point authors and their media echo chambers may suppose, what is now referred to as the “alt-right” is just the old right wing of the Republican Party, plus social media.

The Republican Party has for the better part of 80 years been the arena in which conservative extremists have battled with more mainstream forces for control of the apparatus of a major political organization—and, via that control, for a place at the center of the national discourse. The old right understood that taking over the Republican Party was step one to taking over American politics. The old right also understood that the takeover would not be easy. It would require a long and bitter struggle.

Phyllis Schlafly, who has died at age 92, embraced that struggle from the days when Robert Taft and his conservative allies were accusing Dwight Eisenhower of ideological heresy to the days of Donald Trump.

Some people were surprised when Schlafly provided Trump with an early and enthusiastic endorsement in his race for the 2016 Republican nomination. But it came as no surprise to those of us who have covered and conversed with Schlafly over the years. Conservative commentator Pat Buchanan, who knew and worked with Schlafly for decades, said that she “aimed to do for Trump what she did for the Goldwater movement” in the 1960s And why not? For Schlafly, it was the same fight.

“The people the Republicans should reach out to are the white votes...” —Phyllis Schlafly

An able strategist and publicist, and a tireless organizer, Phyllis Schlafly set out in the 1950s to move the party of Wendell Willkie, Thomas Dewey and Dwight Eisenhower far to the right. As a congressional candidate, the head of party groups and conservative organizations, and a delegate or alternate to Republican conventions from 1952 until this year, Schlafly was fearless when it came to taking on mainstream Republicans—even mainstream conservatives. In the 1950s she traveled in the circles of former Wisconsin Senator Joe McCarthy (defending the “Red Scare” Republican as recently as 2011, when Schlafly told an interviewer, “Everybody he fingered was a communist”) and the John Birch Society (though Schlafly denied joining the group, she said, “I think they’re fine people.”) With her wealthy husband, Schlafly built up the Cardinal Mindszenty Foundation in order to stoke the anti-communist fervor of the Cold War era—during which Schlafly described atomic weaponry as “a marvelous gift given to our country by a wise God.”

At the 1960 Republican National Convention, when Richard Nixon and his allies moved the party toward a more pro-civil right position, The Washington Post reported that “she helped lead a revolt of conservatives against an anti-segregation and anti-discrimination plank in the party’s platform.”

But Schlafly came into her own in 1964 when, as the longtime head of the Illinois Federation of Republican Women, she penned one of the most successful political books in American history: a pro-Barry Goldwater tome titled A Choice Not an Echo: The Inside Story of How American Presidents Are Chosen. It sold more than 3 million copies and framed modern conservatism as a cranky, unyielding, and conspiracy-minded movement. Conservatives did not lose fair fights, Schlafly imagined; they were thwarted by “secret kingmakers,” “Rockefeller Republicans” and Bilderberg Group “globalists who schemed to control the party in order to advance social and economic liberalism.

Schlafly was always on the watch for issues that she could use to build populist opposition to the party establishment and to what were once considered mainstream Republican positions—including support for protecting and advancing the rights of women. She found just such an issue in the early 1970s, when dozens of states endorsed an Equal Rights Amendment to the US Constitution. Schlafly admitted that she had never paid serious attention to the issue (“I figured ERA was something between innocuous and mildly helpful,” she told an interviewer) until she decided to build a movement to stop it.

With strong support from her old-right cronies, Schlafly succeeded in blocking the amendment in the 1970s and early ’80s—pioneering complaints about same-sex restrooms and a host of other supposed “issues” that linger to this day. In so doing, she established herself as a national figure. Obituaries focused on Schalfly’s often incendiary anti-feminist rhetoric and the her “StopERA” campaigning. The Post wrote that she was “credited with almost single-handedly stopping the passage of the Equal Rights Amendment in the 1970s and…helped move the Republican Party toward the right on family and religious issues.” But that analysis missed the big picture of Schlafly’s activism. While she delighted in wrangling with feminists to the end, she spent decades picking fights on issues that vapid media now imagine as “alt-right” manifestations of the moment.

The women who led the multi-year fight to make the GOP an officially and aggressively anti-abortion party battled to the end of her days to purge social moderates (“Republican-in-Name-Only” RINOs) from Republican ranks and celebrated the fact that there is now “no national Republican candidate who dares be anything other than pro-life!” The woman who battled to keep pro–civil rights language out of the GOP platform at the dawn of the 1960s remained an outspoken critic of efforts to diversify the party; after the Republican National Committee’s post-2012 election “autopsy” called for reaching out to African-American and Hispanic voters, Schlafly objected, saying, “The people the Republicans should reach out to are the white votes—the white voters who didn’t vote in the last election. And there are millions of them…. The propagandists are leading us down the wrong path. There is not any evidence at all that these Hispanics coming in from Mexico will vote Republican.”

Schlafly was always griping about immigration and multiculturalism. She stood at the side of Pat Buchanan when he mounted Trump-like presidential bids in the 1990s. More recently, she claimed that President Barack Obama was working “to transform America by undermining our common culture and language”—and suggesting that more than a few Republicans were working with him. She even complained about players from other countries joining US baseball teams, saying, “These foreign-born players enter on visas and take positions that should have gone to American players.” And before Republicans nominated Trump, Schlafly was calling for mass deportations, saying: “In my mind’s eye, I see those railroad cars full of illegals going south. That’s what they ought to do.”

When Trump came to Missouri to campaign this year, he met with Schlafly, and she embraced him as the candidate she had been waiting for. Hailing Trump as “the last hope” and describing the billionaire’s campaign as “a grass-roots uprising,” Schlafly told a St. Louis rally, “We’ve been following the losers for so long—now we’ve got a guy who’s going to lead us to victory.”

Pat Buchanan said Phyllis Schlafly “aimed to do for Trump what she did for the Goldwater movement.”

Schlafly’s support helped Trump with her kind of conservatives, and he embraced her—just as he embraced other old-right and so-called “alt-right” figures. Indeed, when word came that she had passed away, Trump praised Schlafly as “a conservative icon who led millions to action, reshaped the conservative movement, and fearlessly battled globalism and the ‘kingmakers’ on behalf of America’s workers and families.” Picking at old wounds, the Republican nominee described Schlafly as “a champion for women.” But he also slipped in a reference to her as an “America First” battler and praised her legacy as a “movement” builder and leader. That movement did not start recently. Phyllis Schlafly began building it 70 years ago. She built it within the Republican Party. And now, in the age of Trump, it has come to define the Republican Party.