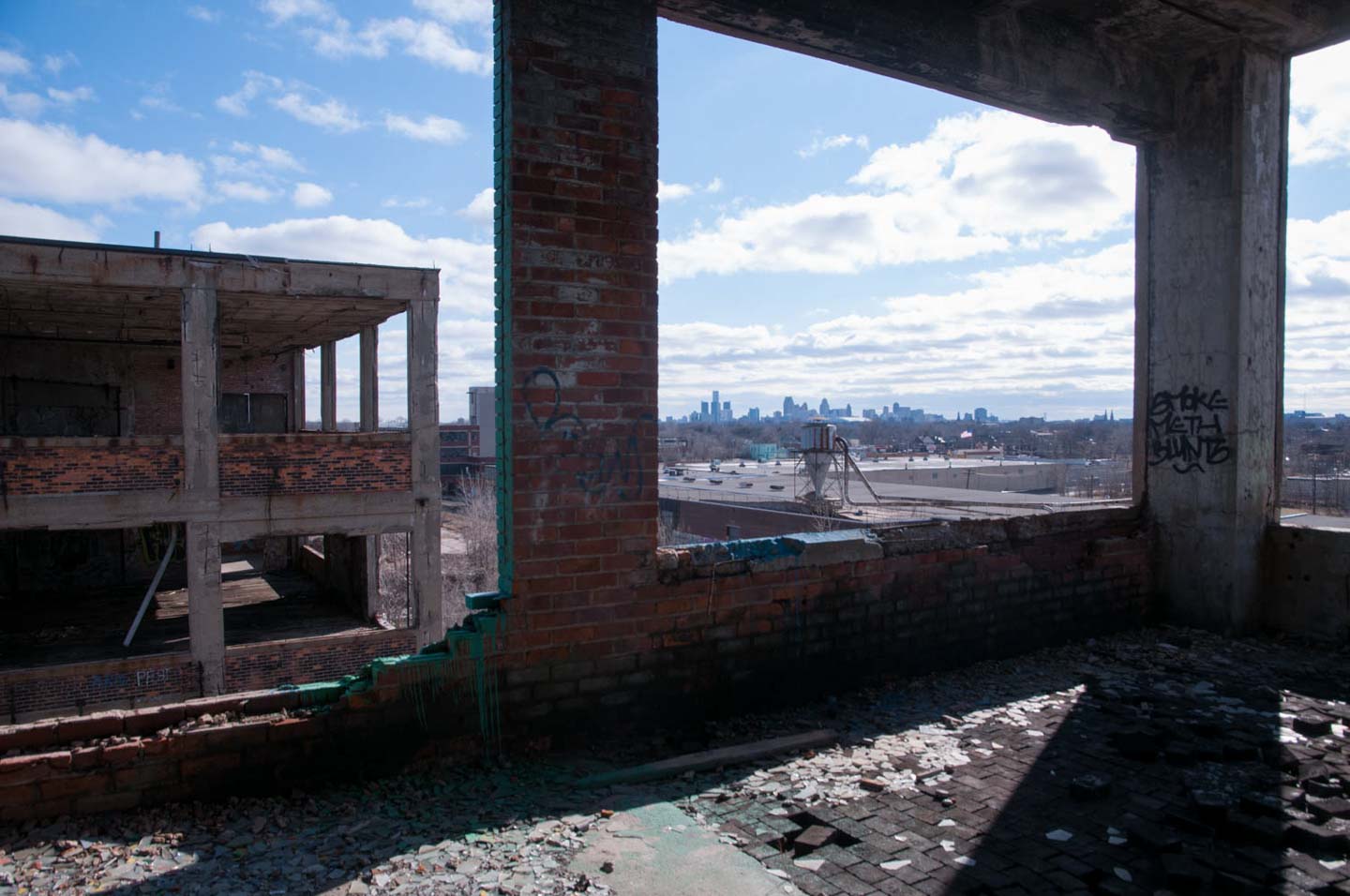 Detroit’s grandest ruin, the Packard Automotive Plant, was once the largest car factory in the United States. A technological wonder that employed 40,000 people and covered 3.5 million square feet at its peak, the factory was everything American manufacturing aspired to be: modern, efficient, and massive in scale. The plant churned out Packard cars from 1903 to 1956, and airplane engines during World War II. But then the production lines went silent, and Packard has been left to decay for the almost seven decades since. 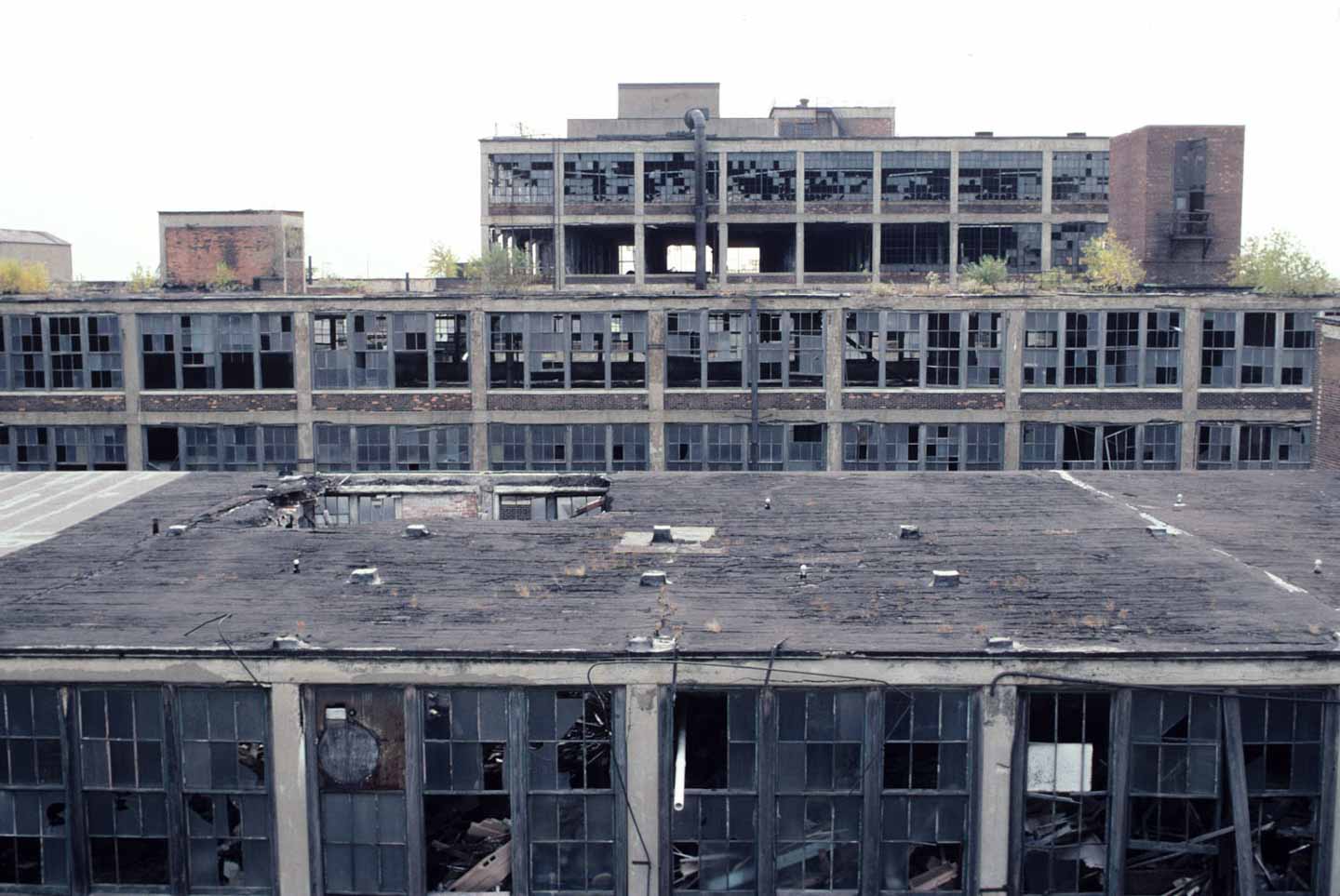 The Packard Plant is now a hulking ruin in a crumbling and depopulated area four miles away from the Grand Circus Park, the booming heart of Detroit. The complex is flanked on the west by Trinity Cemetery and the Capuchin Soup Kitchen, on the east by a drug-treatment center run by the Department of Human Services and the fleabag Packard Motel, and to the north the hum of I-94.

I first visited the plant in 1991, after it had been renamed Motor City Industrial Park. Officially, the plant had become an incubator for small businesses, including auto-repair shops, an industrial laundry, warehouses, and recycling places.

For over a quarter of a century I visited the plant at least once a year, to check how tall the trees were growing on the roof, to examine the graffiti created by artists, to look at Detroit from the roof of the huge plant, and, most of all, to feel my heart beat fast.

Sections of the plant were used by mechanics in need of a free space to strip cars. There were piles of cardboard and mountains of used shoes, piles of discarded tires. Trees grew around them. Time made the walls crack, roofs fall and floors cave in. Scavengers only accelerated the decay.

The building was an awesome place for squatters and a destination for urban explorers. In the mid 1990s it became host to raves by groups such as Plastikman, and as the setting for pellet-gun fights. 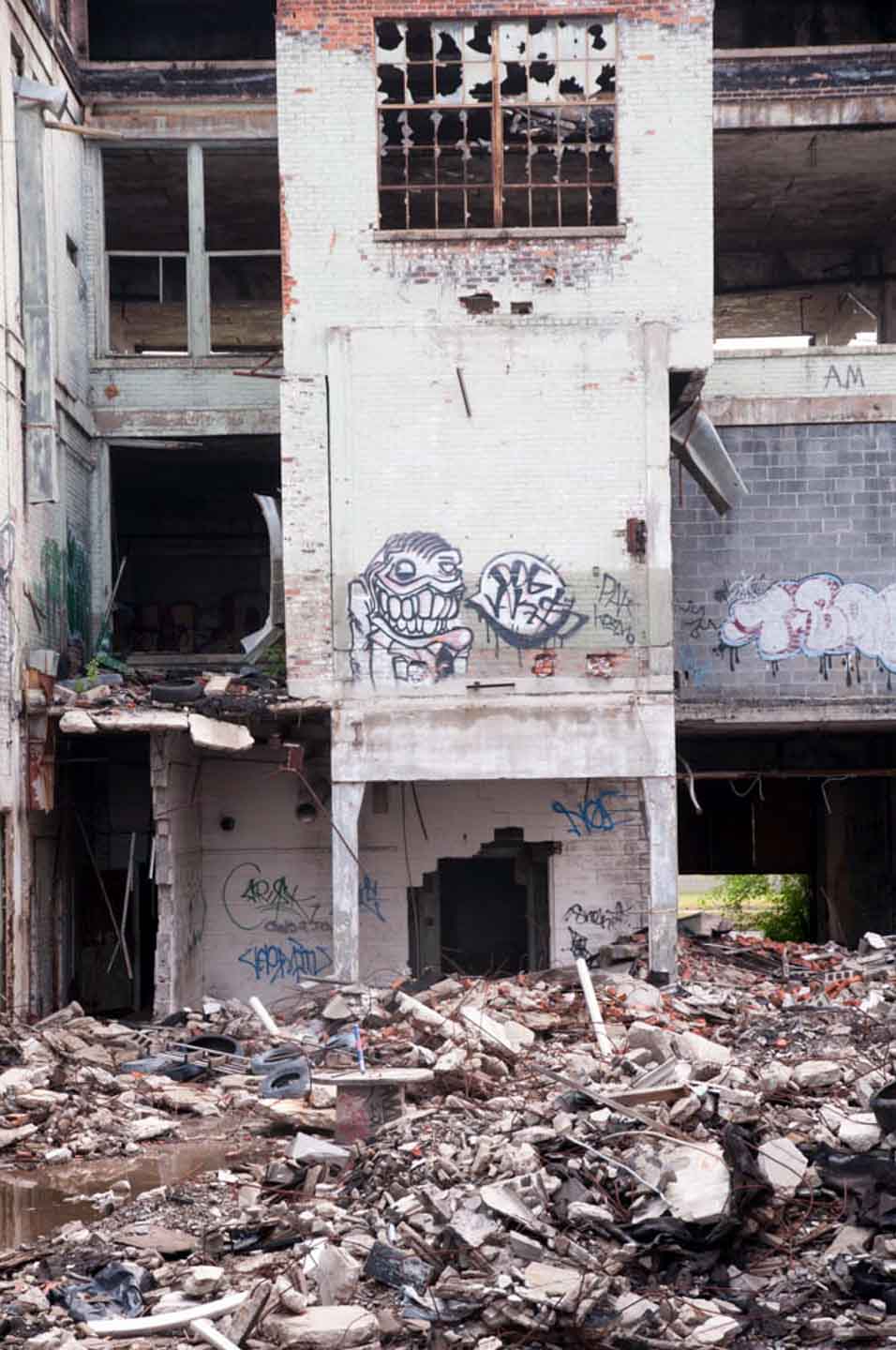 In this century, Packard has become a place to shoot television commercials and movies (scenes from the Transformers franchise were filmed there). In 2015 the plant made world news when a tiger got loose during a fashion shoot. And in the first episode of Amazon Grand Tour, the muscle cars looked great among the ruins. 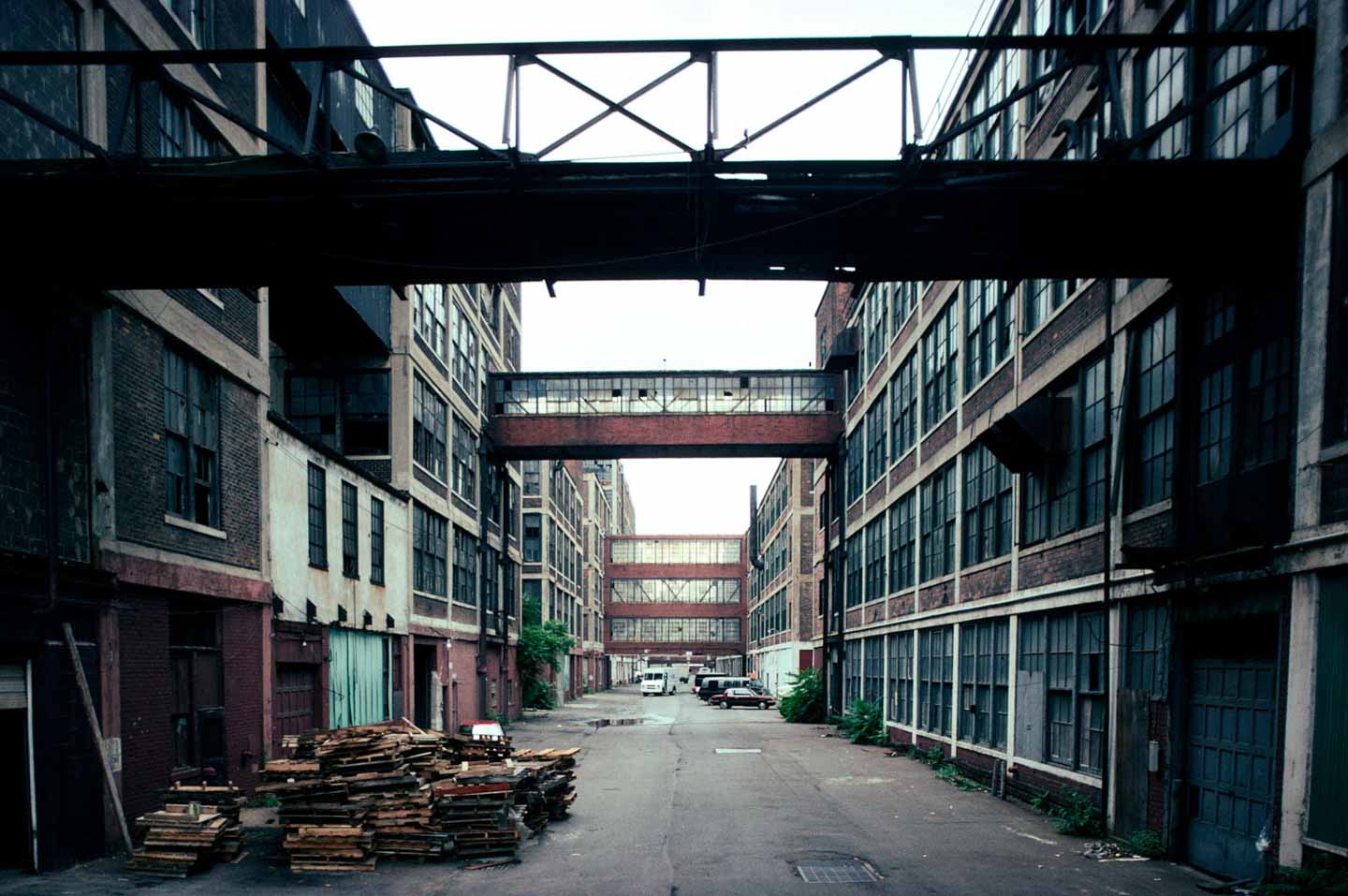 A road inside the plant in 1993. (Camilo José Vergara) 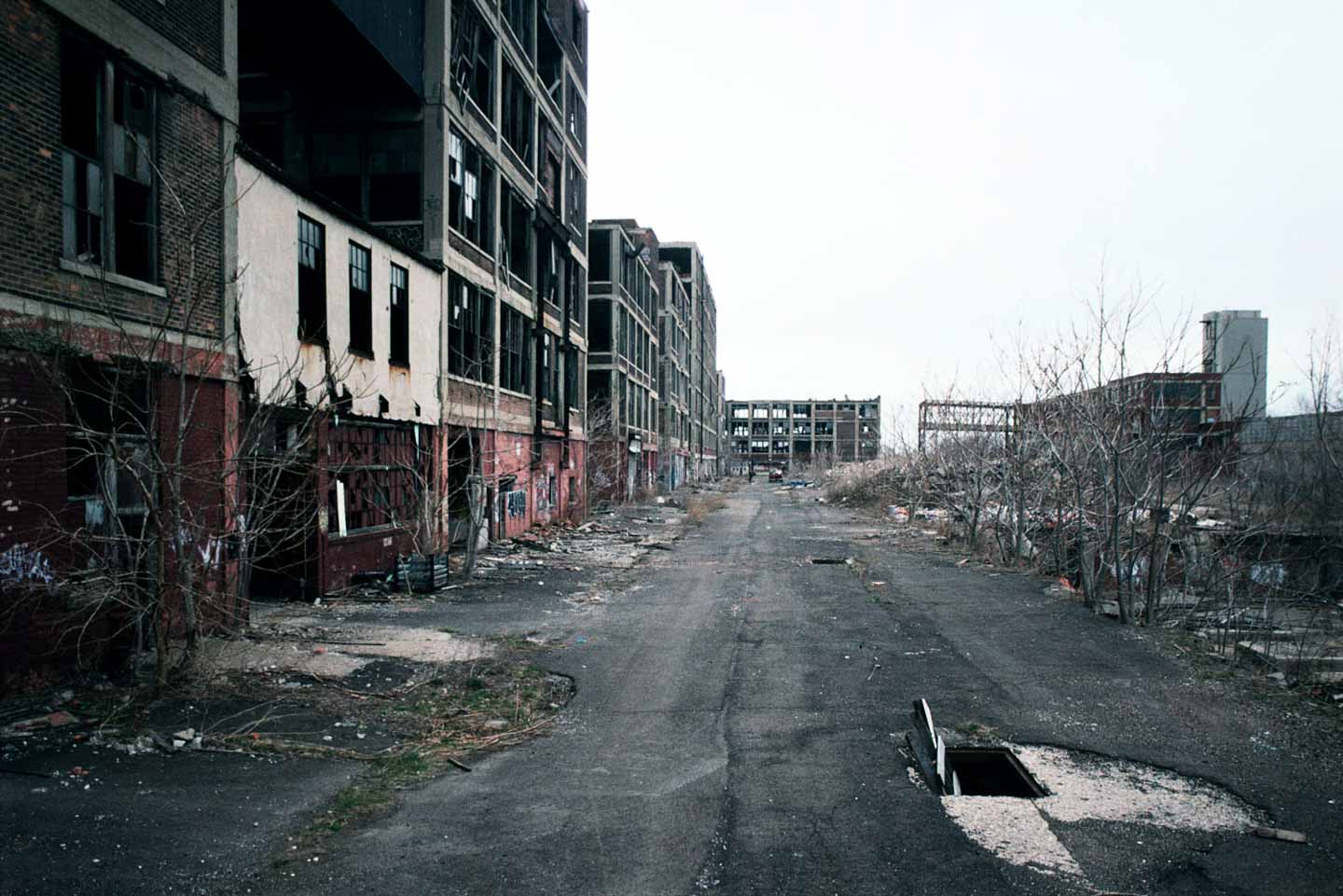 The same view in 2000 after the building on the right was demolished. (Camilo José Vergara) 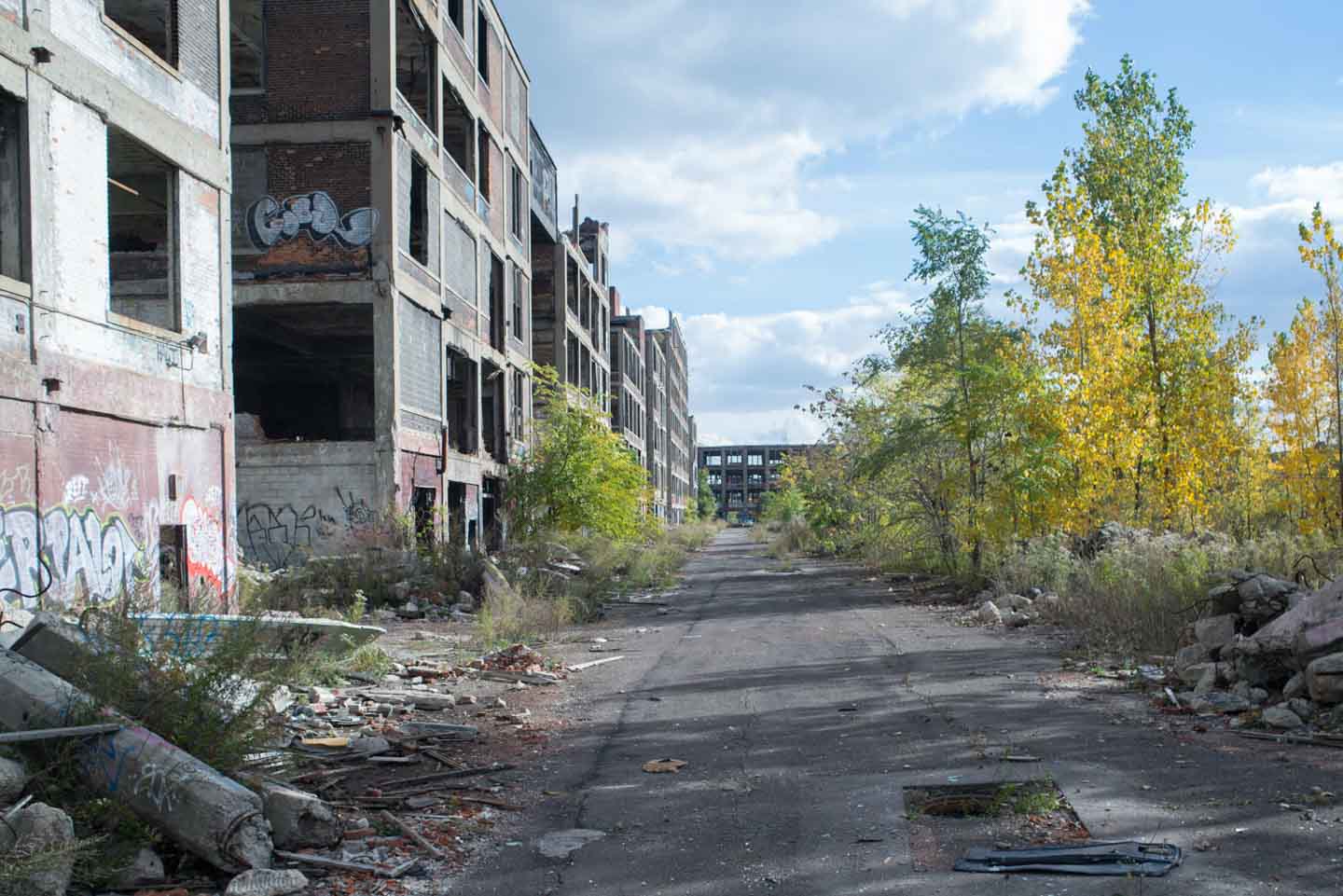 The plant was acquired for $405,000 in 2014 by Fernando Palazuelo, a Peruvian real-estate developer. Palazuelo has a 15-year self-financed development plan to bring business and housing to the area at a cost of $500 million—it remains to be seen how successful his plan will be. The plant has been secured and cleaned, and a billboard on East Grand Avenue shows the cars once built by Packard. But Packard’s ruination isn’t over.

In freezing temperatures this January, the iconic pedestrian bridge that once spanned East Grand Boulevard, linking the north and south buildings of the plant, finally crumbled into the street below. The years and the ravages of weather had finally taken their toll. 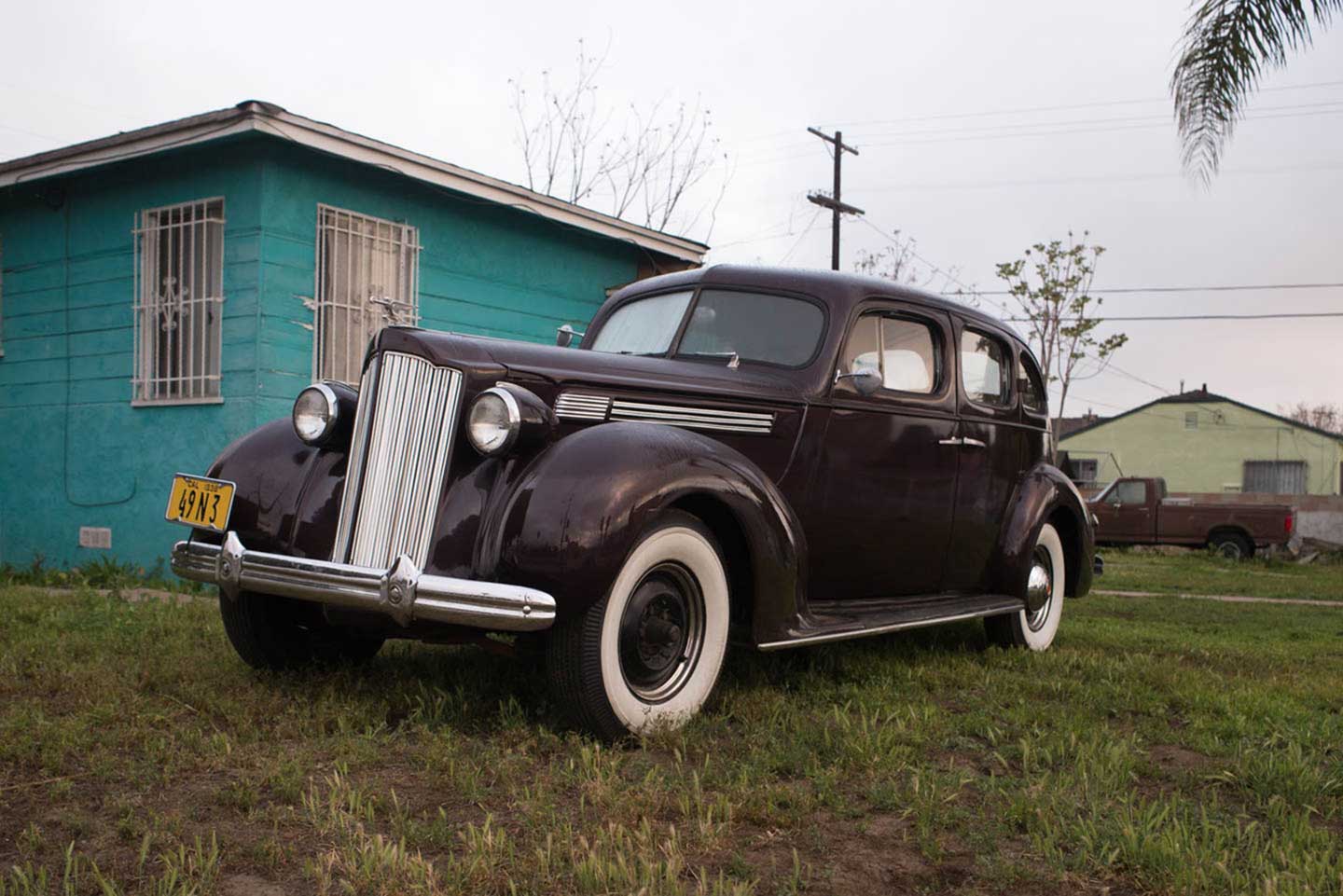 During my nearly half century of documenting poor, segregated neighborhoods, I have encountered three Packards, all of them in South Los Angeles. My favorite is this lovingly restored 1938 black sedan, I found parked next to a bungalow in Imperial Highway an April morning in 2013. The bridge that collapsed, like the black sedan, had been built in 1938.

Packard takes the blows, from scavengers, graffiti artists, developers, and still manages to remain one the nation’s most impressive urban ruins. 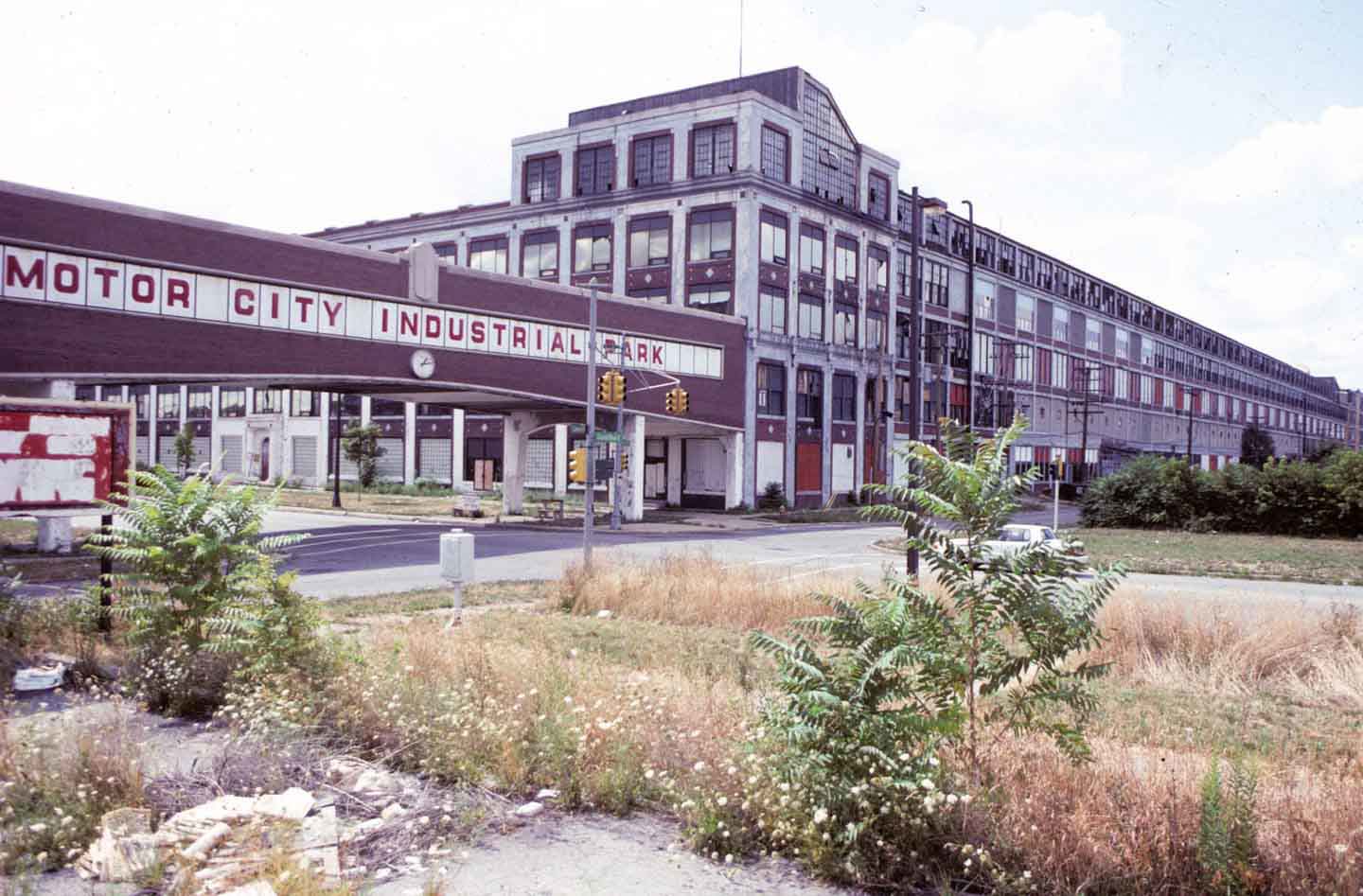 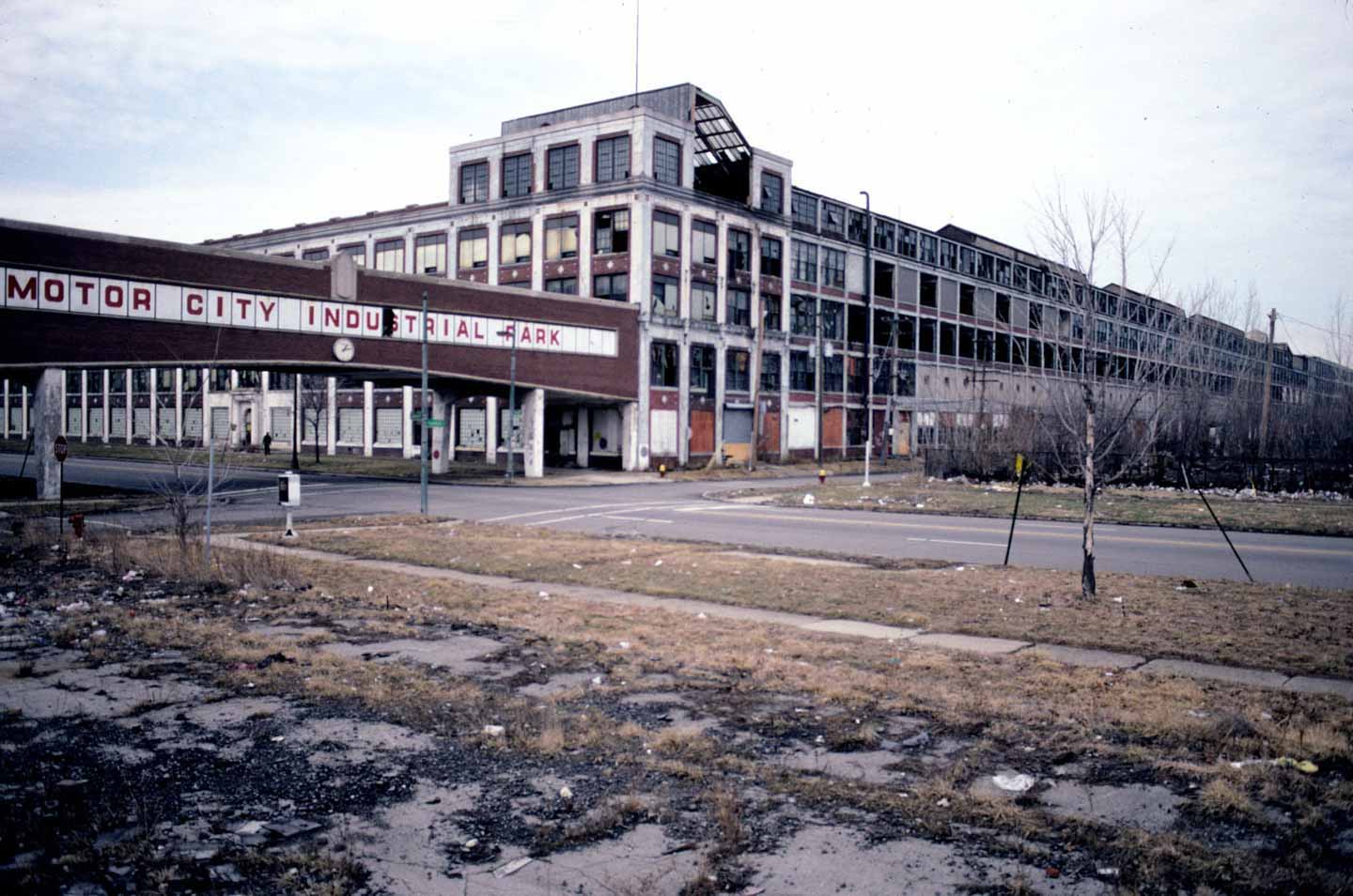 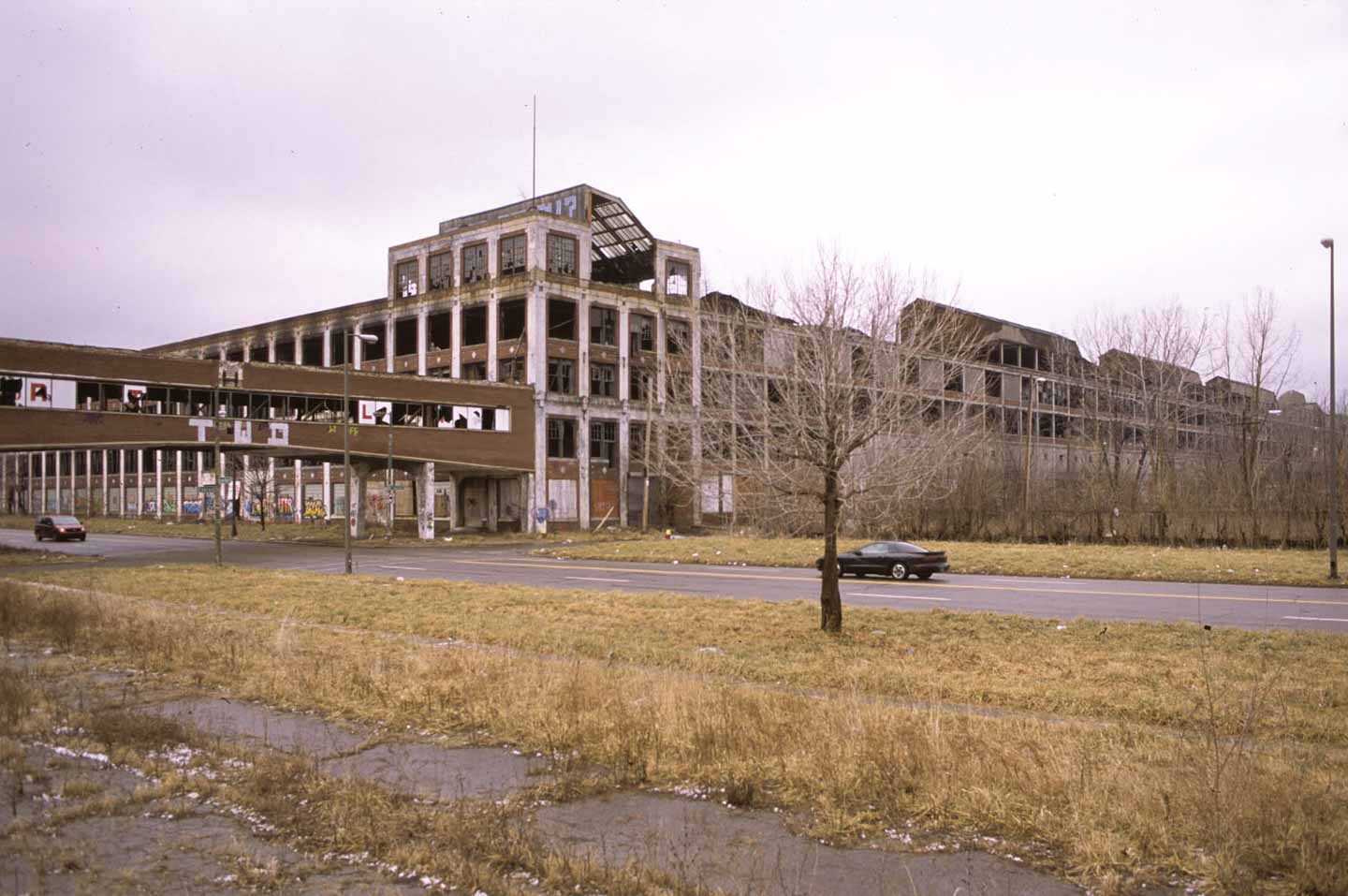 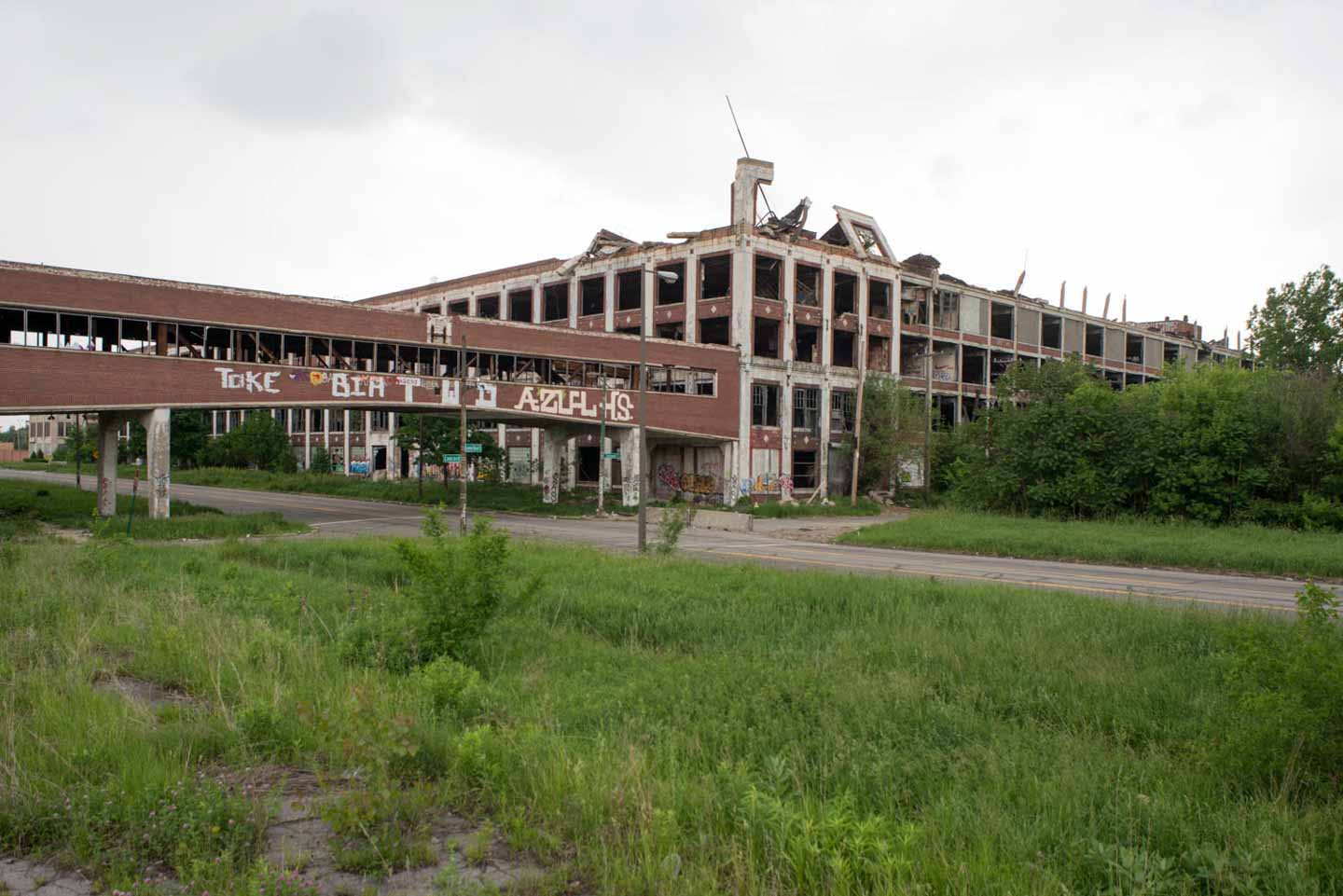 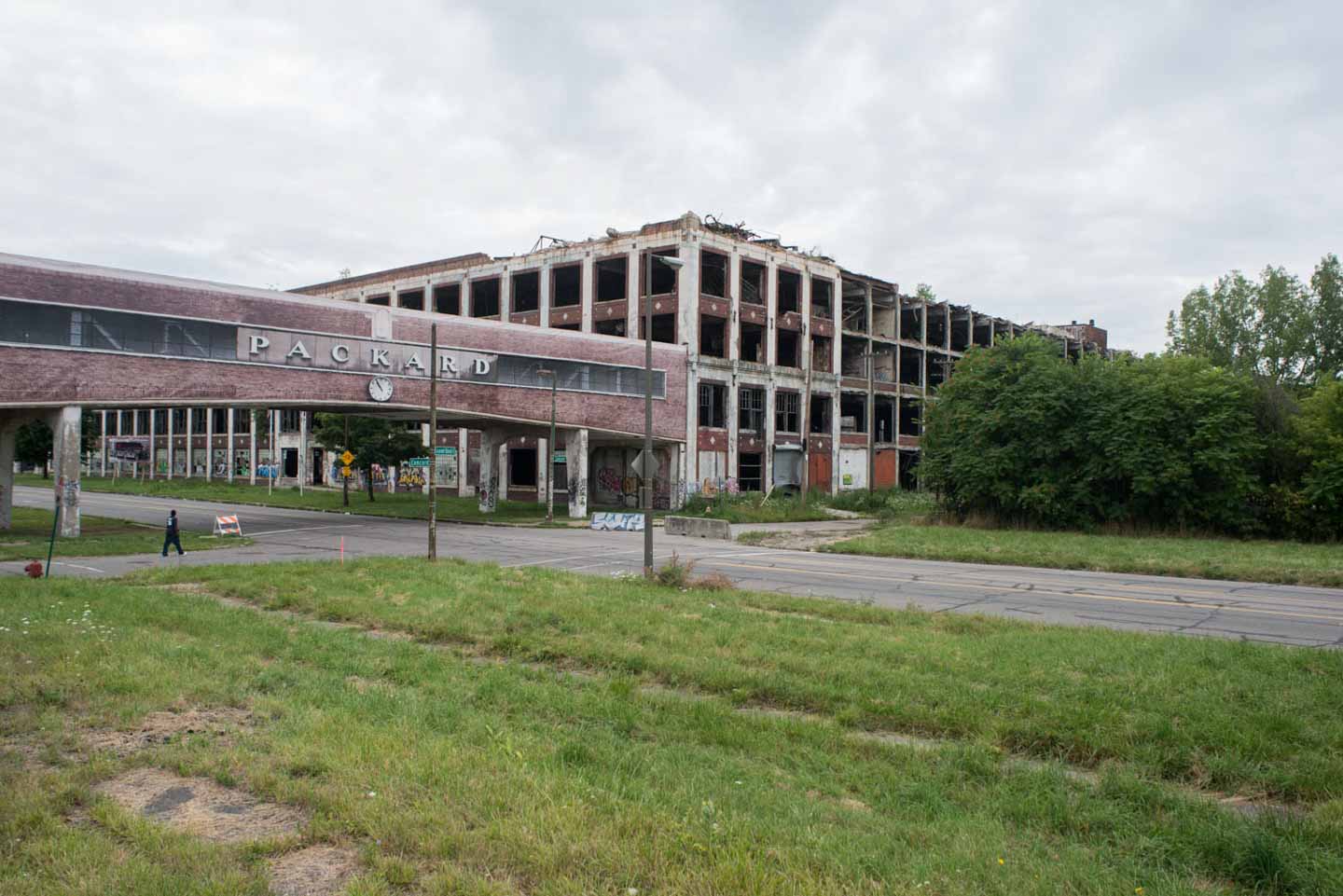 2015, with a new vinyl sign overlaid on the decaying bridge. (Camilo José Vergara) 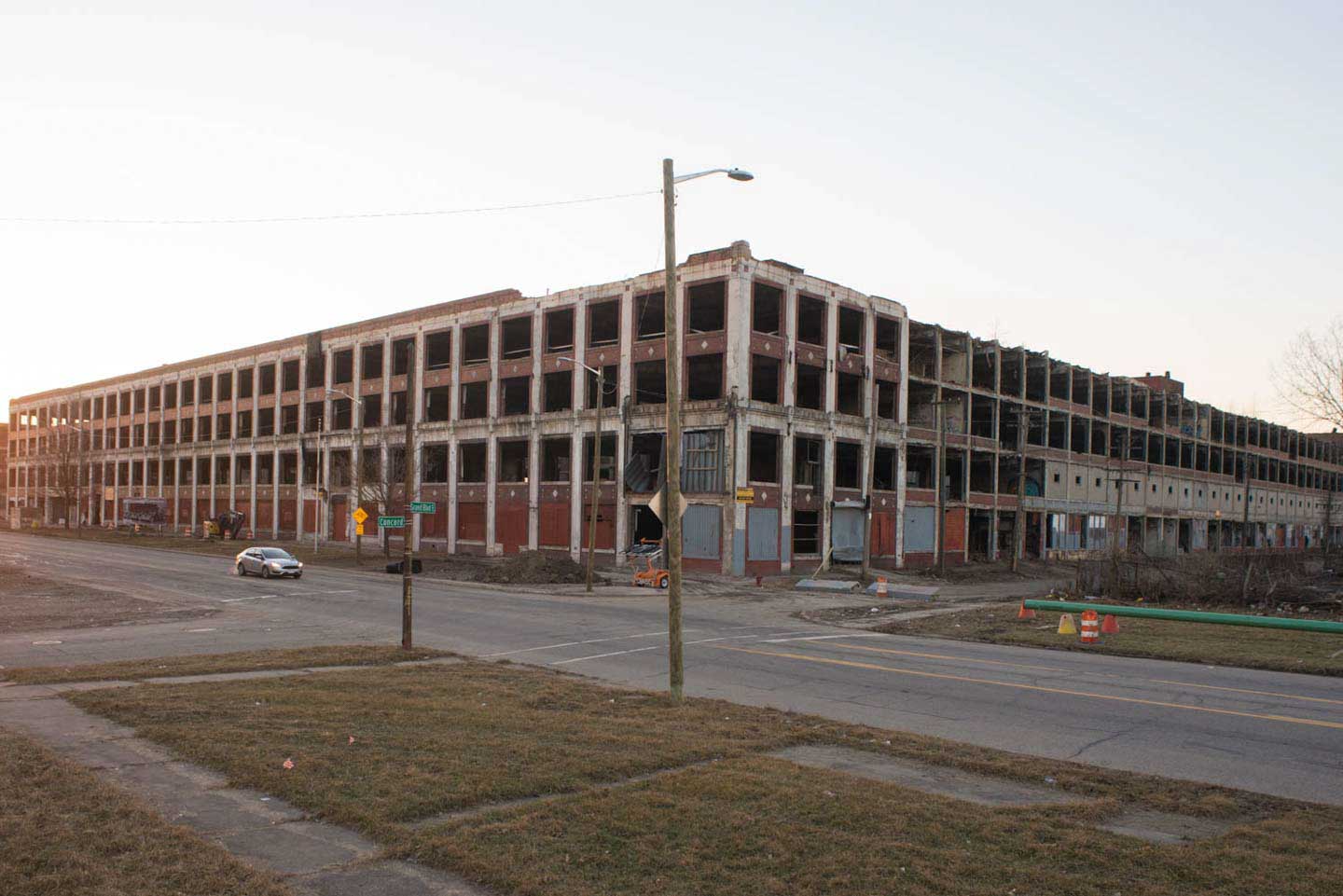 After the bridge had fallen, February 2019. (Camilo José Vergara)