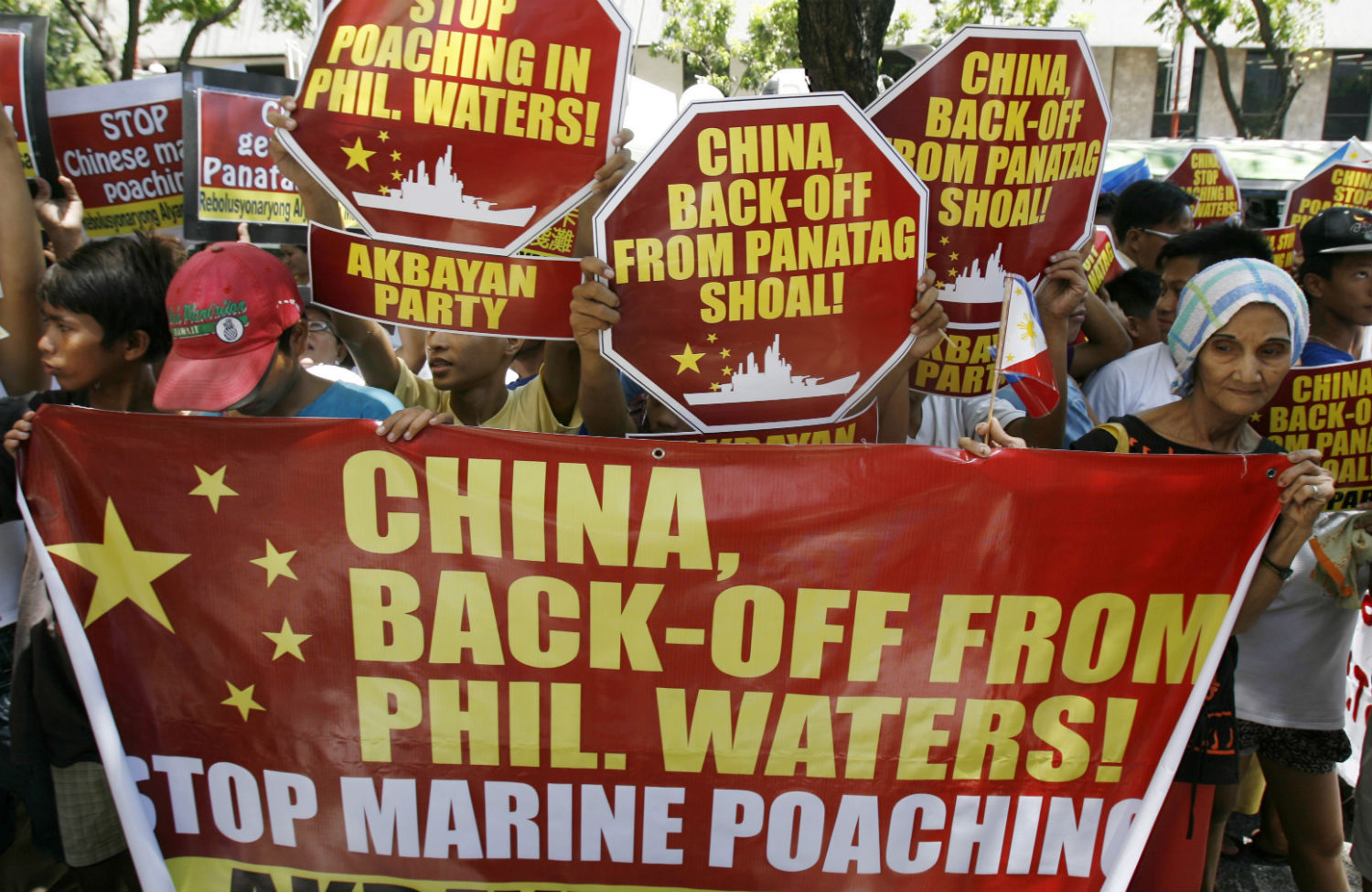 At an April 2012 protest in Manila, demonstrators demanded that the Chinese government pull out from the Scarborough Shoal. (Reuters/Romeo Ranoco)

The last time trouble brewed between China and the Philippines, back in the spring of 2012, there was a naval standoff over disputed territory that drew the United States into support of its alliance, of sorts, with Manila. At the height of the mini-crisis, the United States and the Philippines engaged in joint military maneuvers that included “mock beach invasions along coastlines facing China.” Privately, however, some US officials may have been uneasy about how aggressively Manila asserted its right to sovereignty over, well, nothing—nearly everything that the Philippines claims in the South China Sea is underwater—but in the Philippines the hubbub played well among nationalists, jingoists and the military. China, too, felt the pressure of nationalists and the military. But this standoff was very early in the purported US “pivot” toward Asia and early in the broader Chinese assertion of its supposed right to waters to the south and east, which lately has provoked tension with Japan as well.

Come we now to 2014, and to the extreme, reckless comments from President Benigno S. Aquino III, who drew comparisons between China and the rise of Adolf Hitler’s dreams of world conquest. Said Aquino, in an interview with The New York Times: “At what point do you say, ‘Enough is enough’? Well, the world has to say it—remember that the Sudetenland was given in an attempt to appease Hitler to prevent World War II.”

Even before Aquino’s absurd comments, the Philippines has repeatedly called on the United States to strengthen its military alliance with the islands, even using the catastrophic typhoon damage—in which the Pentagon played a life-saving relief role—to suggest that the US permanently station troops in alliance with Manila. As the South China Morning Post reported on Monday:

Two weeks after Haiyan made landfall, Philippine Foreign Affairs Secretary Albert del Rosario said the disaster “demonstrated” the need for US troops in the Philippines. Shortly after, US ambassador Philip Goldberg argued that Haiyan underscored his top priority: to deepen the military relationship between the countries. That argument riled some Filipino legislators. One leftist political advocacy group decried the move as “disaster opportunism at its finest.”

On the surface, Aquino seems upset that thanks to an American-mediated resolution of the 2012 dispute, his country has lost de facto control of a rocky outcrop in the South China Sea. As the Times reports:

The Philippines already appears to have lost effective control of one of the best-known places of contention, a reef called Scarborough Shoal, after Philippine forces withdrew during a standoff with China in 2012. The Philippine forces left as part of an American-mediated deal in which both sides were to pull back while the dispute was negotiated. Chinese forces remained, however, and gained control.

The dispute this time may not flare into military confrontation, and in any case the rise of China, and its offshore assertiveness, is something that the United States will have to negotiate carefully and may ultimately have to swallow as American power recedes globally.

But don’t tell that to James Clapper, the director of national intelligence, who testified yesterday in Congress that China is fitfully testing American power and resolve. “They’ve been quite aggressive about asserting what they believe is their manifest destiny, if you will, in that part of the world,” said Clapper. Perhaps “manifest destiny”—which echoes a claim made by the United States back in the days when it was itself a rising power—is too strong, but there’s no doubt that China is asserting itself after a century and a half of looking inward and, as the Chinese point out, being subjugated by the world’s imperial powers. That power will extend beyond the immediate waters around China, and yesterday Military Times reported that a Chinese naval squadron is holding drills deep in the Indian Ocean.

For years, the Pentagon and, even more strongly, those in the military-industrial complex who’ve sought a reason to ramp up military spending, have raised the threat of the Chinese bogeyman to justify an American buildup in Asia. Those efforts got a boost over the weekend when it was reported that China is proposing a modest rise in military spending, from $139 billion to $148 billion next year—reported in The New York Times under the headline: “China to Ramp Up Military Spending.” (That’s in comparison to the more than $600 billion that the United States spent on defense last year, a number that underestimates the actual total.) Some analysts, such as Ian Easton of the Project 2049 Institute—while still sounding alarms about China—point out that actual Chinese military strength is woefully lacking and “much weaker than it looks,” adding that China is not even capable of mounting an assault on Taiwan, the breakaway island republic that China claims.