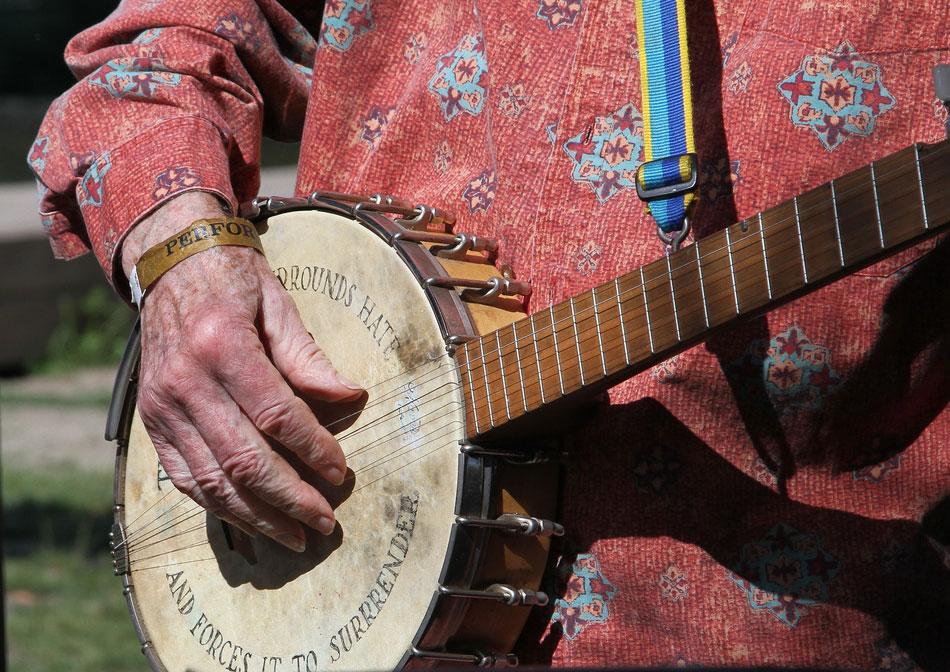 November 15, 1969—“Vietnam Moratorium Day”—nearly half a million people gathered on the mall in Washington DC, to protest the war, and Pete Seeger was on the stage. “I guess I faced the biggest audience I’ve ever faced in my life,” he told me in an 1981 interview. “Hundreds of thousands, how many I don’t know. They stretched as far as the eye could see up the hillside and over the hill.”

The song he sang was “Give Peace a Chance,” John Lennon’s first non-Beatles recording. He had wanted to sing it in the US, but Nixon’s INS wouldn’t let him in the country, so he sang it, and recorded it, at a bed-in in Montreal.

“I’d only heard the song myself a few days before,” Pete recalled, “and I confess when I first heard it I didn’t think much of it. I thought, ‘That’s kind of a nothing of a song, it doesn’t go anyplace.’ I heard a young woman sing it at a peace rally. I never heard Lennon’s record. I didn’t know if the people there had ever heard it before. But I decided to try singing it over and over again, until they did know it.

“Well, we started singing, and after a minute or so I realized it was still growing. Peter, Paul and Mary jumped up onstage and started joining in. A couple of more minutes, and Mitch Miller hops up on the stage and starts waving his arms. I realized it was getting better and better. The people started swaying their bodies and banners and flags in time, several hundred thousand people, parents with their small children on their shoulders. It was a tremendously moving thing.”

Pete Seeger’s great work was not just singing the songs, but getting everybody else to sing them—getting his audience, us, to sing. A lot of us had that experience: for me it was at Coffman Memorial Union at the University of Minnesota, when I was a kid, and Pete was onstage alone with his banjo, and we were all singing, in harmony. Of his concerts, Robert S. Cantwell wrote, “Pete spread wide his arms as we sang to him, and it changed me. It was 30 years ago, and I have not changed back.”