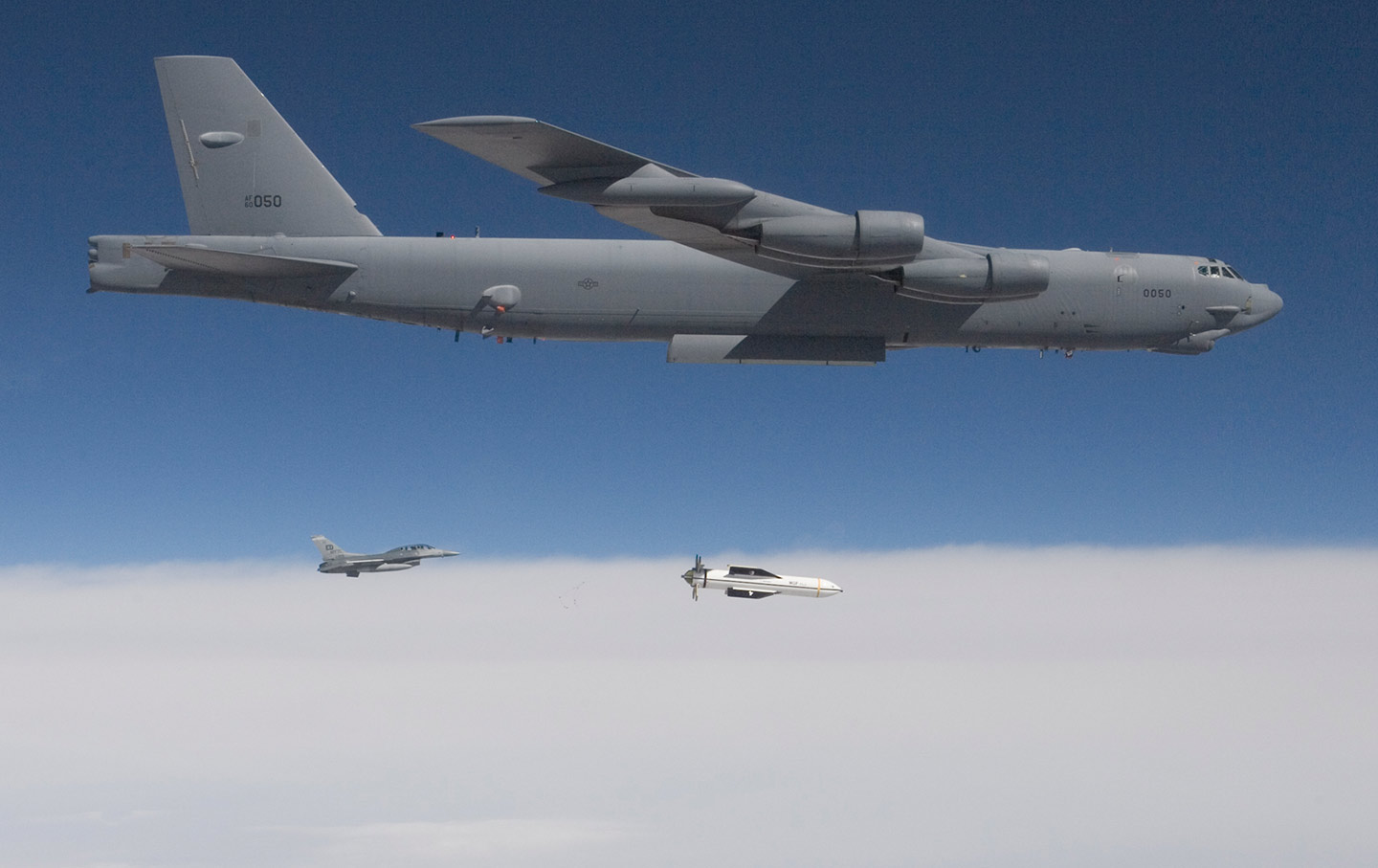 A B-52 releases a test version of the Massive Ordnance Penetrator (MOP) over White Sands Missile Range, New Mexico, in 2009. (Photo by Department of Defense)

Last April, the US military detonated the “mother of all bombs”—a GBU-43/B Massive Ordnance Air Blast (MOAB), with 18,000 pounds of explosives—over an ISIS tunnel complex in Afghanistan. This being the first use in combat of the giant MOAB, its use in Afghanistan generated widespread press attention. In many of the media commentaries, the GBU-43/B was described as the largest non-nuclear weapon in the US arsenal—as powerful, in fact, as the smallest nuclear weapons developed by the United States. In turns out, however, that the GBU-43/B is eclipsed by an even larger non-nuclear weapon, the 30,000-pound GBU-57 Massive Ordnance Penetrator (MOP), dubbed by some the “father of all bombs” to distinguish it from the MOAB. Originally designed to destroy underground nuclear facilities in Iran, the GBU-57 is now being readied for use against North Korea. 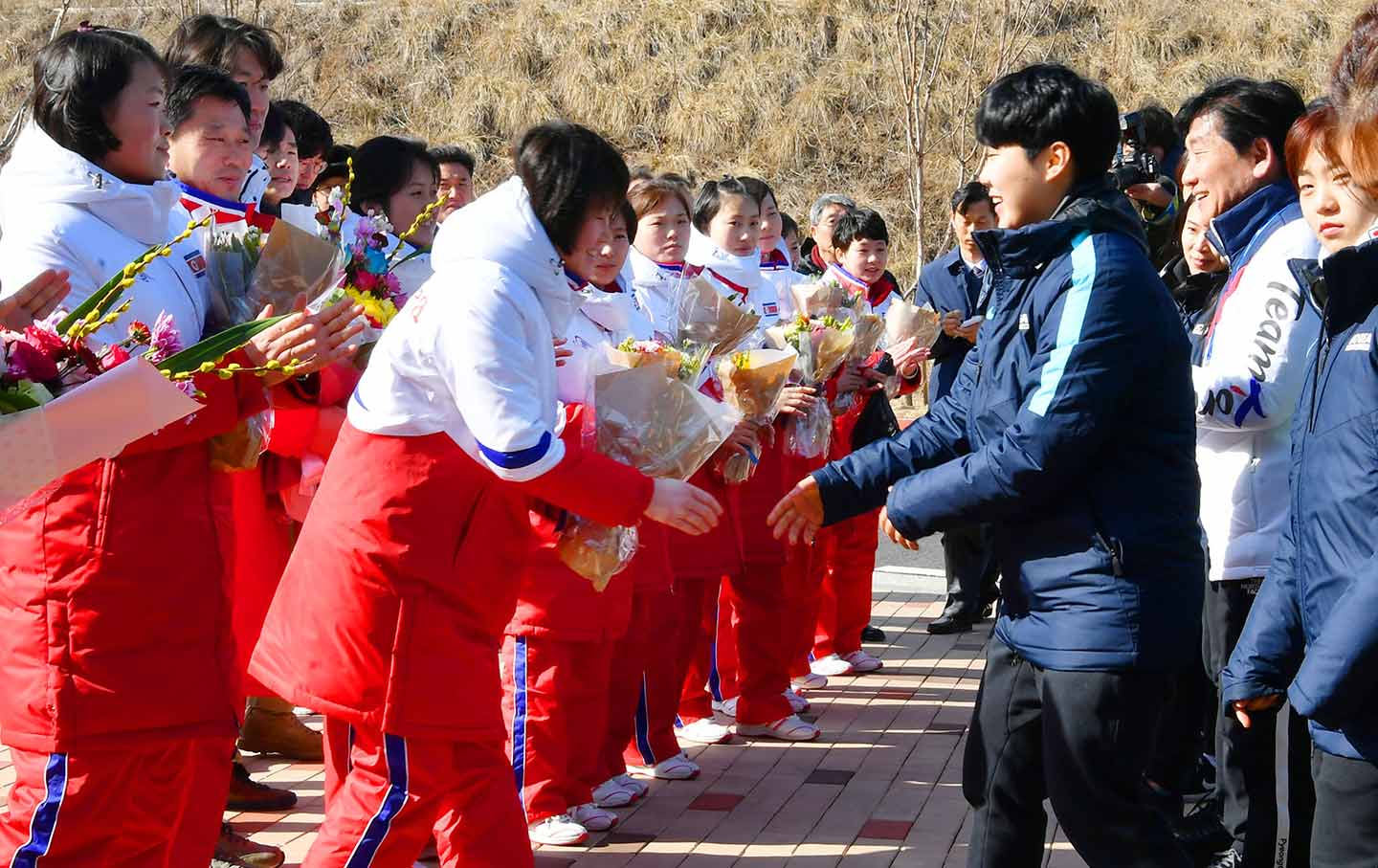 The Winter Olympics Offers a Glimpse of Peace for Korea

It is no secret that the Defense Department is preparing for possible preventive attacks on North Korean nuclear and missile facilities, supposedly intended to prevent the Kim Jong-un regime in Pyongyang from developing an intercontinental ballistic missile (ICBM) capable of delivering nuclear warheads to the continental United States. National Security Adviser H.R. McMaster has openly called for strikes of this sort, sometimes described as the “bloody nose” option. But any such scenario faces two major hurdles: First, a US strike could provoke massive retaliation by the North against South Korea and Japan, producing vast numbers of civilian casualties; and second, it could fail to destroy all of the North’s nuclear and missile facilities, most of which are thought to be hidden in deep underground shelters. So far as can be determined, the Pentagon has yet to come up with a viable response to the first of these (though it is continuing to search for one), but, with the GBU-57, it may have come up with a solution to the second.

It is impossible to minimize the risks of a first-strike “preventive” US attack on North Korea. Even if American air and missile attacks succeed in destroying many of North Korea’s long-range missiles, that country would still be capable, in all likelihood, of raining vast numbers of artillery shells and short-range missiles (some possibly armed with chemical weapons) on Seoul, located only a few dozen miles from the North Korean border, and on other heavily populated areas in Japan and South Korea—probably killing tens or hundreds of thousands of people (including many American soldiers and their dependents living there). This prospect has led some senior Pentagon officials—including, reportedly, Defense Secretary Jim Mattis—to caution the White House against ordering a preventive strike. Nevertheless, there are many indications that the Pentagon is putting in place the means to conduct such an attack—and recent enhancements to the GBU-57 bomb are among the most alarming of those.

The “father of all bombs” was originally developed on a crash basis during the Obama administration to provide the Pentagon with a non-nuclear weapon capable of destroying Iran’s underground nuclear installations. One of those facilities, the Fordow nuclear-enrichment plant, was located in a tunnel complex dug deep into the side of a mountain. Although President Obama was avidly seeking a diplomatic solution to Iran’s nuclear ambitions—ultimately succeeding in 2015, with the adoption of the Iran nuclear deal, formally known as the Joint Comprehensive Plan of Action—his military advisers wanted to be able to destroy Fordow from the air in case the negotiations failed. The GBU-57 was their answer.

The GBU-57 is a 30,000-pound behemoth made by Boeing that can penetrate through hundreds of feet of rock and concrete before denotating its more than 5,300 pounds of high explosive. As described by the US Air Force, “the warhead case is made from a special high-performance steel alloy and its design allows for a large explosive payload while maintaining the integrity of the penetrator case during impact.” (You can’t make this jargon up!) The bomb is so heavy that only one US combat plane—the B-2 stealth bomber—is certified to carry it.

Even after the signing of the Iran nuclear deal in 2015, the Air Force continued to work on the GBU-57, seeking to improve its accuracy and destructive impact. By that point, attention was shifting from Iran to North Korea. As in Iran, the North Koreans have buried many of their key nuclear and missile facilities in fortified underground shelters, hoping to protect them from US air and missile strikes. To destroy those installations, any munitions employed by the United States (short of city-busting nuclear weapons) would have to possess both high penetration capacity and great accuracy, to ensure that the bomb’s explosive power was not misdirected.

In 2015, the Air Force tested the GBU-57 at White Sands Missile Range, dropping two bombs sequentially from a B-2 bomber to maximize their underground penetration. According to a report in The Wall Street Journal, “senior officials say the results show the bomb—when dropped one on top of the other—is now more capable of penetrating fortified nuclear facilities in Iran or in North Korea.”

With the possibility of war with North Korea looming ever greater, the Pentagon spent additional millions of dollars to improve the GBU-57’s accuracy and to assess its effectiveness in new tests at White Sands. Last May, according to a Pentagon report, “the Air Force successfully completed a three-weapon drop [of the GBU-57] from B-2 aircraft on a representative target,” demonstrating the bomb’s improved effectiveness. The installation of a more advanced guidance system on the bomb and the initiation of new tests were said to result from a “SECDEF [Secretary of Defense] special-interest effort,” suggesting direct intervention by Defense Secretary Mattis.

In November, the improved version of the GBU-57 was deemed ready for battlefield use, according to a Pentagon report cited by Anthony Capaccio of Bloomberg News. Then, in January, the Air Force transferred three B-2 stealth bombers and their crews from Whiteman Air Force Base in Missouri to Andersen Air Force Base on Guam, in the Western Pacific. Although described as a normal rotational shift intended to showcase US airpower in the Pacific, it is impossible to view this move without considering possible plans for attacks on North Korea.

Designed to penetrate heavily defended enemy air space and deliver a range of conventional and nuclear weapons, the Northrop-Grumman B-2 “Spirit” is the most expensive aircraft in the US inventory, costing an estimated $1.2 billion each (some say much more). In any scenario involving a preemptive strike on North Korea, the B-2 would be expected to play a pivotal role, flying well into enemy airspace to deliver its payload on high-value targets, presumably underground nuclear and missile facilities. As the only bomber capable of delivering the GBU-57, their presence on Guam at this time is, to say the least, highly provocative. Asked by Bloomberg whether GBU-57s have been deployed to Guam along with the B-2s, the Air Force has refused to say, one way or the other.

It would be premature to say that a US attack on North Korea, of a sort advocated by General McMaster and others, is just around the corner. While the Defense Department has moved a wide range of offensive weapons, including B-1 and B-52 bombers (in addition to the B-2s), within easy striking range of the North, we do not yet see the full mobilization of forces and the evacuation of US dependents from South Korea that would signal an imminent outbreak of hostilities. Nevertheless, the fact that things have moved as far as they have—including the rushed enhancement of the “father of all bombs” for possible employment against the North—should have us all highly concerned.

With the Winter Olympics just about to begin, and South Korean President Moon Jae-in desperately striving to arrange peace talks with the North, this is the moment to speak out for de-escalation of the Korean crisis and the commencement of serious talks involving all key parties, including the United States, leading to a reduction in threatening arsenals and behaviors on all sides. Readers should also voice support for two bills currently before Congress, HR 4837, the “No Unconstitutional Strike against North Korea Act,” and its Senate version, S. 2016; both prohibit the president from launching a first strike against North Korea or otherwise engaging US armed forces in hostilities with the North without a declaration of war or explicit statutory authorization by Congress.