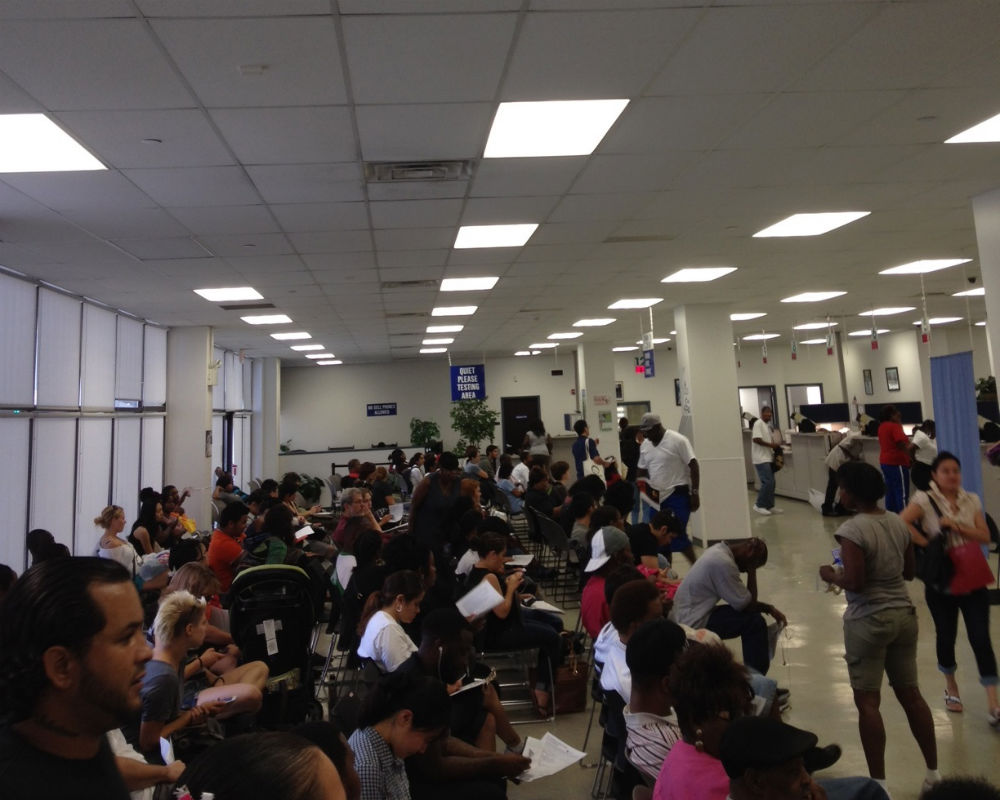 At a DMV location in downtown Philadelphia in September 2012, some 100 people waited in lines that endured for over an hour. (Courtesy of Ari Berman)

Judge Bernard McGinley of the Commonwealth Court of Pennsylvania ruled against the state’s strict voter ID law today following a lengthy trial last summer. The law had been temporarily blocked since last October pending a full trial. The ruling is a big win for voting rights and a clear setback for voter ID supporters.

Judge McGinley found that the law violated the state constitution because hundreds of thousands of registered voters lacked the restrictive forms of ID required by the state, few had obtained the requisite ID since the law’s passage in March 2012, the state had not made it easy to get an ID and there was no evidence of in-person voter fraud to justify the burdens of the law.

“Hundreds of thousands of electors in Pennsylvania lack compliant ID,” McGinley wrote. “Enforcement of the Voter ID Law as to these electors has the effect of disenfranchising them through no fault of their own. Inescapably, the Voter ID law infringes upon qualified electors’ right to vote.”

Noted McGinley: “In contrast to the hundreds of thousands who lack compliant photo ID, only 17,000 photo IDs for voting purposes have been issued.” Since the 2012 election, fewer than 150 new voting IDs had been issued by the state per month.

That’s because getting a voter ID in Pennsylvania was a bureaucratic nightmare. There are 9,300 polling places in the state, but only seventy-one DMV offices. There are only five DMV offices for the entire city of Philadelphia, none in nine counties and the in sixteen counties offices are only open one or two days a week . “The Voter ID Law does not contain, on its face, any valid non-burdensome means of providing compliant photo ID to qualified electors,” McGinley wrote. “Accordingly, the Voter ID Law is facially unconstitutional.” The lead plaintiff in the case, Viviette Applewhite, was a 93-year-old great-great grandmother who marched with Martin Luther King Jr. and had voted in every election for the past fifty years but did not have a driver’s license and was at risk of being disenfranchised by the new law.

Nor did the state present evidence to justify the new voter ID law. The state “wholly failed to show any evidence of in-person voter fraud,” McGinley wrote. “Certainly a vague concern about voter fraud does not rise to a level that justifies the burdens construction here. Therefore, this Court does not find in-person voter fraud a compelling interest the Voter ID Law was designed to serve.”

As I’ve written before, the devil is in the details when it comes to voter ID laws and other sophisticated, restrictive voting measures being introduced today. McGinley’s ruling “dispelled the myth that voter ID is commonplace and that everyone who needs an ID has one,” said Michael Rubin, an attorney with Arnold & Porter who argued against the law.

Pennsylvania became a case study for the problems with voter ID laws. “The Voter ID Law as written suggests a legislative disconnect from reality,” McGinley wrote.

Indeed, one had the sneaking suspicion that Pennsylvania’s GOP legislature passed the law for political reasons, not because of a good-faith desire to remedy the nonexistent problem of in-person voter impersonation. Pennsylvania House Majority Leader Mike Turzai infamously remarked in 2012 that the voter ID law “is gonna allow Governor Romney to win the state of Pennsylvania.” Following the election, the chair of the Pennsylvania Republican Party said: “Think about this, we cut Obama by 5%, which was big. A lot of people lost sight of that. He won, he beat McCain by 10%, he only beat Romney by 5%. I think that probably Voter ID had helped a bit in that.”

The state will likely appeal today’s verdict to the Pennsylvania Supreme Court. But there’s little evidence to suggest that the higher court will reverse the lower court’s ruling. The Pennsylvania Supreme Court in a 4-2 decision in September 2012 vacated a lower court ruling originally upholding the voter ID law and found a “disconnect between what the Law prescribes and how it is being implemented.”

What effect will the Pennsylvania ruling have in other trials against voter ID laws? Not much, argues law professor Rick Hasen. Pennsylvania’s law was blocked in state court, while challenges to voter ID laws in Wisconsin, North Carolina and Texas were filed under Section 2 of the Voting Rights Act, which requires the plaintiffs to show persuasive evidence of racial discrimination. [Update: The Southern Coalition for Social Justice is also challenging North Carolina’s voter ID law in state court.]

But the substance here matters a lot. The new Voting Rights Act amendments introduced in Congress yesterday treat voter ID laws differently than other forms of voting restrictions, implying that voter ID laws aren’t as bad. Today’s Pennsylvania ruling suggests just the opposite. “Voting laws are designed to assure a free and fair election,” wrote McGinley. “The Voter ID Law does not further this goal.”