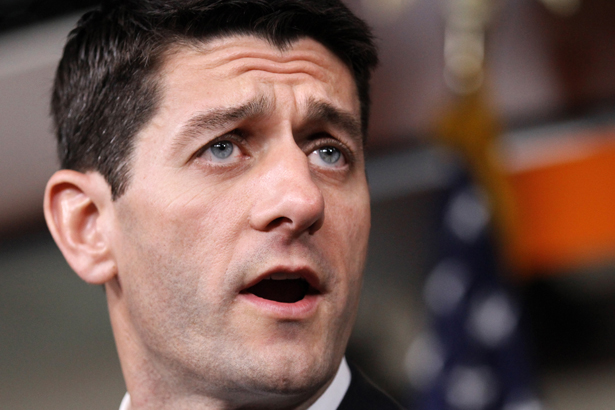 Paul Ryan’s CPAC speech yesterday was almost comically offensive even before it became clear that it was based on a lie.

By now, you’ve probably heard about the speech itself, in which Ryan denounced the left for offering people “a full stomach—and an empty soul.” Discussing the moral squalor of free school lunch programs, Ryan retold a story he heard from Eloise Anderson, a former single mother on assistance who became a hero to the right by calling for the abolishment of welfare (she’s now a member of Scott Walker’s cabinet). It was about a boy Anderson had ostensibly met who didn’t want a free government lunch. “He wanted his own lunch—one in a brown-paper bag just like the other kids’,” said Ryan. “He wanted one, he said, because he knew a kid with a brown-paper bag had someone who cared for him.”

Ryan’s words would have been nasty even if the underlying story were true. Do parents whose kids get subsidized school lunches not care for them? Does Ryan really think their souls are empty? Last night, however, The Washington Post’s Glenn Kessler reported that the anecdote Ryan used was actually ripped out of context from the bestselling book An Invisible Thread: The True Story of an 11-Year-Old Panhandler, a Busy Sales Executive, and an Unlikely Meeting with Destiny. The book is about the friendship between author Laura Schroff and Maurice Mazyck, whom Schroff met when he was begging on the street. At one point, she made him school lunches every day and left them with her doorman to pick up on the way to school. In a heartbreaking passage, Mazyck asked her to put them in a brown paper bag like the ones all the other kids had.

Anderson’s communication’s director now admits that she never actually spoke to Mazyck, though she appropriated his story when she testified last year at a congressional hearing chaired by Ryan. As it happens, Schroff and Mazyck have partnered with an organization called No Kid Hungry that, among other things, works to connect poor children to free school meals. “[A] simple inquiry would have determined that the person telling the story actually is an advocate for the federal programs that Ryan now claims leaves people with ‘a full stomach and an empty soul,’” writes Kessler, describing it as a story “too good to check.”

That in itself is telling, since even in it’s apocryphal version, it’s not that good of a story. After all, it’s not as if liberals think that free school lunches are better than homemade ones. The argument for free school lunches are that they are better than no lunch at all. The implication of Ryan’s “full stomach…empty soul” line is that he disagrees. He just knows better than to say so outright, and so he needs to hide behind an imaginary poor child.