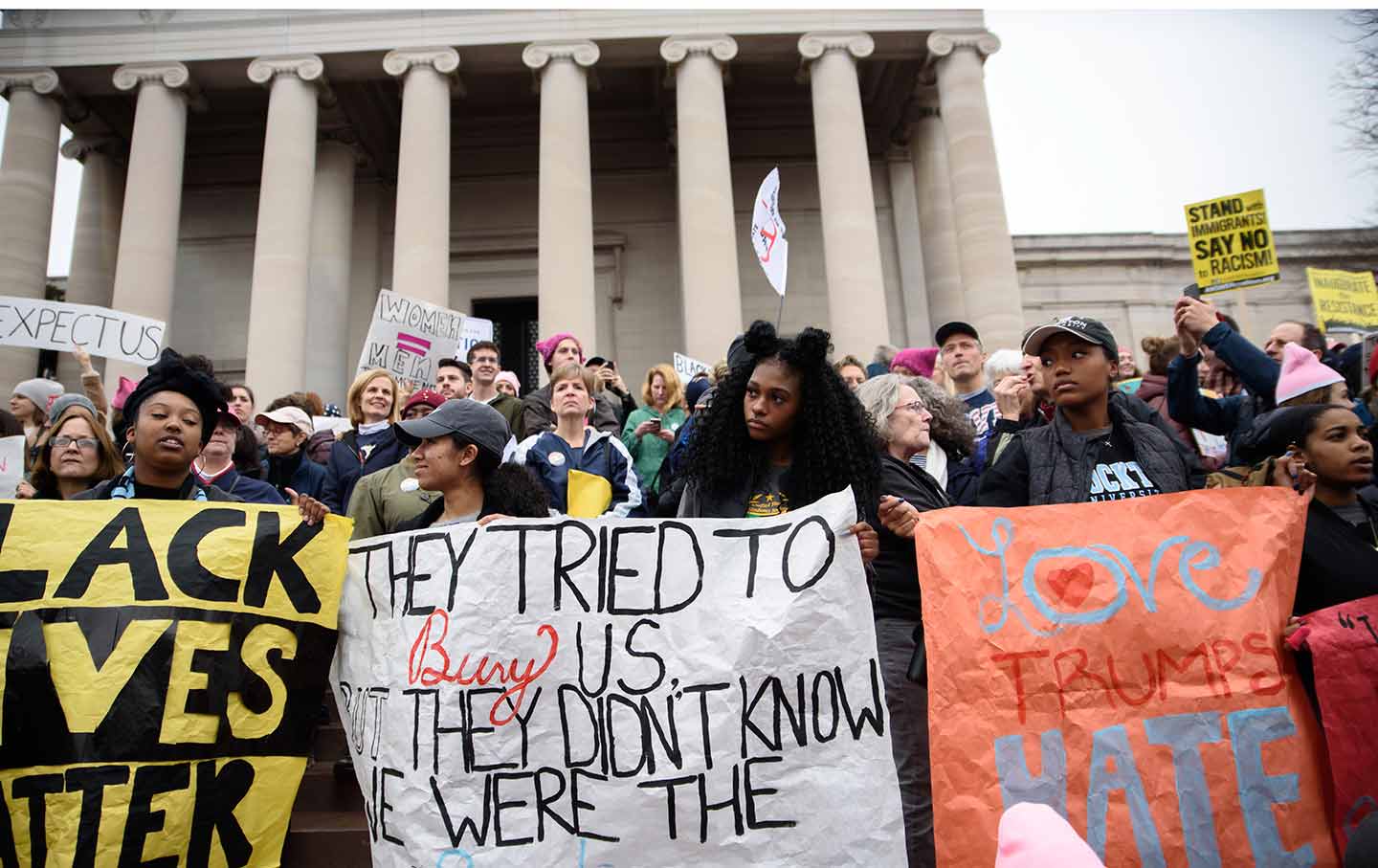 I’m a journalist and journalism professor, but was compelled to attend the Women’s March on Washington out of a sense of moral rather than professional duty. Against a rising tide of bigotry and an all-out assault on the press, my obligation as a citizen superseded that of a spectator. Still, my participation would mark one of the rare times over the course of three decades when my roles as a journalist and a citizen seamlessly converged. The extent to which the fate of our democracy and the press are inextricably linked is more apparent than ever.

I boarded a 7 am Greyhound Bus from New York’s Port Authority on Saturday still jet-lagged from two weeks in Abu Dhabi where I watched televised Senate hearings for cabinet nominees uniquely unfit to govern but poised to dismantle all that they’d be charged to defend. Far from home I craved solidarity with Americans equally alarmed by the glaring ill-will and who refuse to normalize a presidency tainted by bigotry, crude rhetoric and questionable ties to Russia and its interference with our election.

Mindful of the troubling message this election has transmitted across the globe, I felt personally obliged to demonstrate that America is better than the results suggest. While some misguidedly counsel patience, many of us have seen enough to know that the rights of women, LGBTQ, Muslims, Mexicans, and African Americans are under siege as are press freedom, the environment, public schools, and the legitimacy of national intelligence agencies and even truth.

Given all that’s at stake I was baffled by fellow African Americans who derided the march as a white women’s movement, or one that overlooked white women’s role in Trump’s election. Not only does their critique overlook that three of the four march organizers are women of color, but it is needlessly divisive and insufficiently inert when unified resistance is needed most.

Within minutes of my arrival I was engulfed in a sea of pink as a multiracial, multi-generational mass of mostly women swarmed towards the Lincoln Monument chanting “Hey, hey, ho, ho, Donald Trump has got to go,” and

“We Need a Leader, Not a Freaking Tweeter.”

Women of all races and ages donned knitted pink pussycat hats, but they didn’t purr; they roared.

“This is what democracy looks like,” they boomed, at times to the beat of drums. “My Body, My Rights,” they chanted. “Her Body, Her Rights,” came the more muted response of the out-numbered men.

“No Hate, No Fear, Everyone is Welcome Here.”

Along the way I was variously amused, astounded and buoyed by the spectacular irreverence of women brandishing signs declaring “Pussy Power,” “Viva La Vulva,” and “Grab Patriarchy by the Balls” to mock the new president who had bragged about grabbing women by their crotches.

“My President is a Molester,” read a bright yellow sign bearing the image of Trump’s smiling face.

But women also conveyed concerns about the environment, racism, national security, and the new president’s glaring conflicts of interest and refusal to release his tax returns.

Women of color waved printed placards that read “Respect Women of Color” while countless “Black Lives Matter,” signs were held aloft by people of all races.

The visibility of African American and other women of color of all ages—many donning the knitted pink hats of the movement—proved the naysayers wrong.

The mélange of causes melded into a cry for humanity, with one young African-American woman somberly holding a sign that simply read: “What about Flint?”

As we marched past the Trump Hotel on Pennsylvania Avenue many in the crowd hissed and jeered, the crowd’s defiance mounting as we moved towards the White House.

Amid the indignant masses, resistance proved a potent antidote to despair.

“We will not go away—welcome to your first day!”

The battle ahead is daunting, but for the first time since the election I feel we have a fighting chance to topple tyranny. This is what democracy looks like.

MLB, NBA and NHL Games Canceled in the Twin Cities