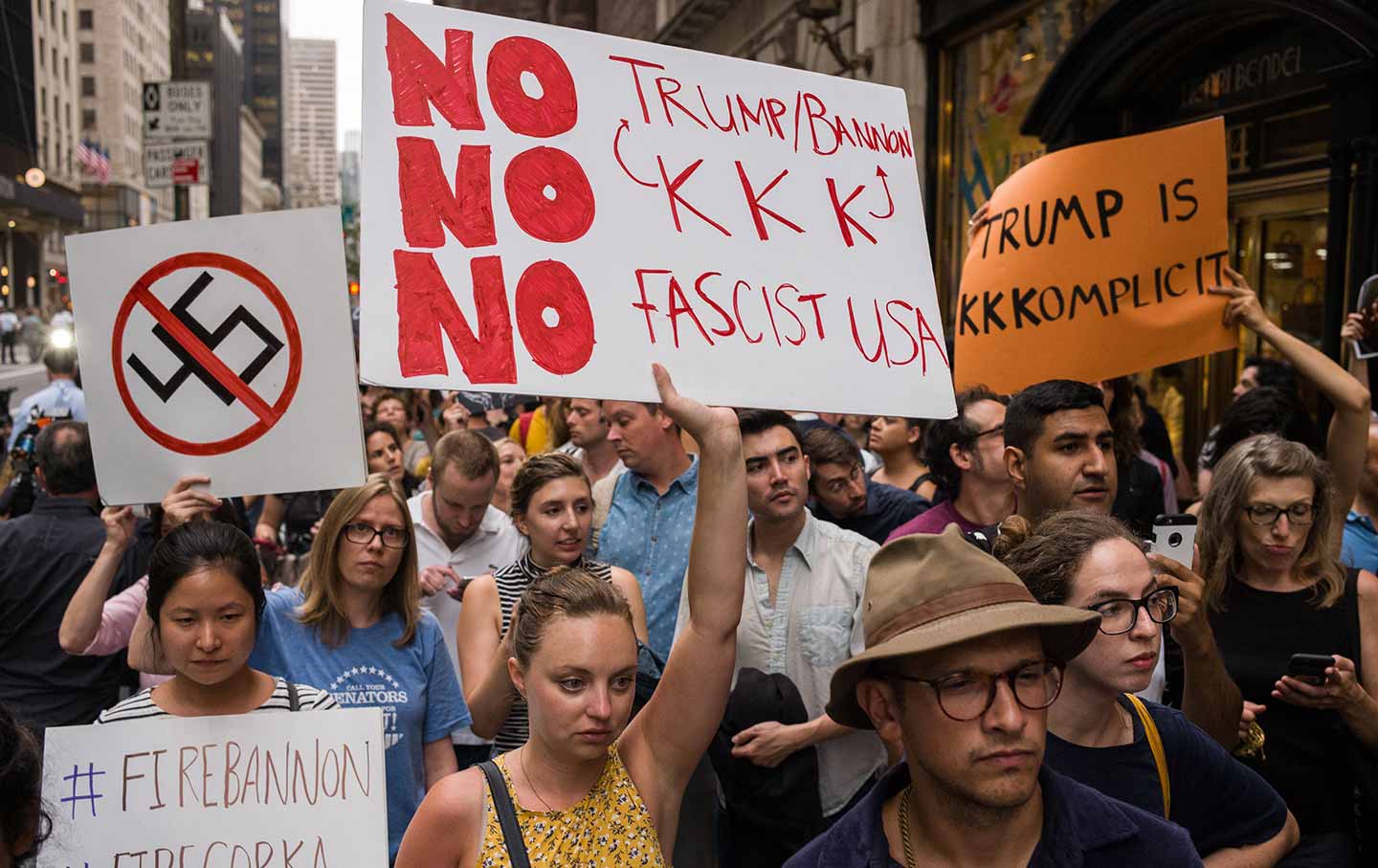 There are three possible reasons for Donald Trump’s depraved response to the Nazi violence unleashed in Charlottesville on August 11–12. All are equally unnerving. The first is the simplest: Trump is a morally senescent man, an emotional simpleton who just does not have the capacity to tell  right from wrong. That he could assert that even some of the torch-bearing, Jew-and-black-and-gay-baiting thugs who descended on Charlottesville during that weekend—shouting “Blood and soil!” and “Jews will not replace us!”—were “very fine people” lends itself to this interpretation. That he could consider Nazi and anti-Nazi motives to be morally equivalent implies damage to a core part of his ethical being so profound as to be irreparable.

The second is that Trump—who rode to power, as demagogues always do, by speaking to the worst impulses of his audiences and embracing whatever nasty, violent visions were most politically expedient at any given moment—is simply taking the opportunism game to a whole new level. That certainly is possible; after all, Trump rode Islamophobia to victory in the GOP primaries and also helped to fuel it. He played off voters’ fears about African-American and immigrant criminality. He utilized crude, vulgar sexism against Hillary Clinton. He urged the US military to carry out war crimes against terrorism suspects and their families: torture, collective punishment, summary execution using bullets dipped in pigs’ blood, and so on. No politician in American history has ever gone down so many different demagogic paths simultaneously and with so much success.

So for Trump the demagogue, his Charlottesville response may have been simply another political calculus, an attempt to shore up his embittered white base. It is, I suppose, possible—though the unhinged nature of Trump’s press conference seems to lower the likelihood of this—that Trump himself knew the Nazis and the Ku Klux Klan were entirely to blame for what unfolded, but saw far more political gain in pandering to his angry followers by blaming blacks and radical leftists and the other usual suspects regularly targeted by RantRadio and Fox TV.

The third possible reason is that Donald Trump—the son of KKK-supporting Fred Trump, the pupil of Joe McCarthy henchman Roy Cohn—actually is, to the very core of his being, a white supremacist, a man who always has and always will divide humanity into hierarchies based on race, ethnicity, and religion. Trump’s almost pathological inability to do what ought to be the simplest thing in American politics—issue a clear, unambiguous, eyes-looking-straight-at-the-camera denunciation of swastika-waving, weapons-toting Nazis—certainly raises this as a strong possibility. He has certainly never needed Steve Bannon’s or any other adviser’s encouragement to spout his bigoted obscenities. So Bannon’s recent ouster, however welcome, will not address the key problem we’re facing.

Whichever combination of these scenarios is correct, the implications are clear: Trump has no business wielding power over anything or anyone—not over a business and its employees, certainly not over a government department, and by no conceivable stretch of the imagination over the most powerful country in the world. Trump’s words and actions show that he is either deeply unstable, terrifyingly opportunistic, and/or filled with the sort of hate that triggered previous world conflagrations and all too easily could result today in a nuclear war or, domestically, in a period of race riots and pogroms—or both.

It is far beyond time for men and women of good conscience to denounce this president. And it is time to hold to moral account all those who stay by this madman’s side while he threatens nuclear apocalypse one day and encourages—or, at the very least, fails to denounce—race-based violence the next.

Trump’s presidency is both a symptom of the deep crises that have been cleaving American society for decades and also a catalyst magnifying those crises. That a significant part of the US electorate supports Trump not despite his racism but because of it ought to terrify any responsible public figure. And yet, trapped in their own Faustian bargain with extremism, GOP leaders have consistently shied away from tackling Trump’s toxicity head-on. Even after he defended Nazis, most GOP figures didn’t criticize Trump by name. This shouldn’t surprise anyone; after all, for decades, the GOP—and, we must admit, large parts of the Democratic Party—have played dog-whistle politics, advancing their economic and cultural agendas by pandering to public fears around race and playing the ostensibly nonracist, but in reality deeply discriminatory, “tough on crime” and “tough on welfare” cards. The GOP leadership has, for many years now, welcomed into its political house extremists from Jerry Falwell to Rush Limbaugh to Sean Hannity.

Now those ideologues and their audiences are running the show.

We must act immediately to salvage whatever can be recovered from the wreckage of the political system that Trump and his GOP enablers are destroying. America will not simply be able to return to “normal”—whatever that vague term might mean—after Trump. In the eyes of the world, we will have been radically diminished by this man’s viciousness. But that sobering thought does not mean we don’t have an urgent obligation to begin the cleanup as soon as possible. Trump is spreading a toxic sludge over this great land. He is empowering bigots and normalizing political violence. After Charlottesville, we must resist this man with every fiber of our being.