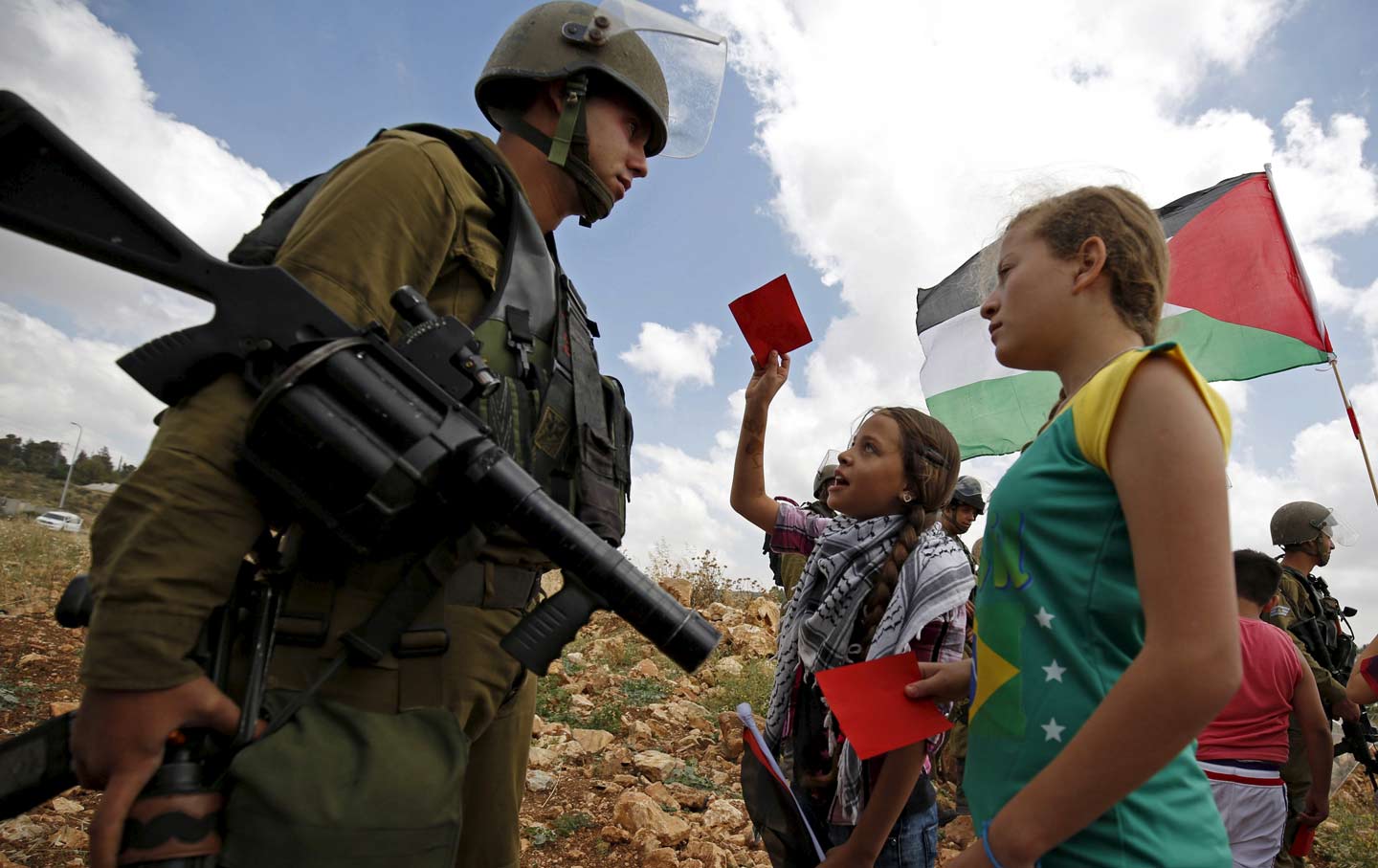 Below is an open letter signed by luminaries such as Angela Davis and Alice Walker as well as athlete-activists such as John Carlos and Craig Hodges, and organizations including Jewish Voice for Peace and the US Campaign for Palestinian Rights. The letter asks NFL players to consider the political ramifications of a propaganda trip organized by the Israeli government that aims to prevent players from seeing the experience of Palestinians living under military occupation. It is a trip, as the letter makes clear, that “aims to use your fame to advance their own agenda: an agenda that comes at the expense of the Palestinian people.” Details of the trip, which was supposed to be private, were published in the Times of Israel, and this letter is the response. (Note: the Times of Israel article states that New England Patriot Martellus Bennett is a part of this delegation. I have confirmed that this is not the case. Also please note that other players mentioned in the Times of Israel article are reevaluating whether they will attend.)

To the NFL Delegation to Israel:

We are writing to you as individuals and groups who work in support of human rights and collective liberation and admire many of you who have been outspoken in movements for freedom and justice in the United States.

We have been especially inspired by you using your celebrity to shed light about and support various struggles including Black Lives Matter. The decision by Martellus Bennett to boycott the upcoming Patriots team visit to the White House following the Super Bowl win is especially brave and sends a clear message that one must take a stand against racism and oppression.

Based on the public dedication to social justice that many of you share, it came as a surprise to us to see that you will be going on a tour of Israel next week sponsored by the Israeli government as part of an effort to get you to “become ambassadors of goodwill for Israel.” We would ask that you reconsider attending. These trips bringing celebrities to Israel are part of a larger “Brand Israel” campaign to help the Israeli government normalize and whitewash its ongoing denial of Palestinian rights. The Ministry of Foreign Affairs has dedicated a lot of resources to this campaign, which is designed explicitly to improve Israel’s image abroad to counter worldwide outrage over its massacres and war crimes. Speaking about your trip, Israel’s head of Strategic Affairs and Public Diplomacy Minister Gilad Erdan said, “The ministry which I lead is spearheading an intensive fight against the delegitimization and BDS [Boycott, Divestment and Sanction] campaigns against Israel, and part of this struggle includes hosting influencers and opinion-formers of international standing in different fields, including sport.” In other words, they are aiming to use your fame to advance their own agenda: an agenda that comes at the expense of the Palestinian people.

Palestinians have chosen boycott as a tactic only after exhausting so many other approaches, and with the guidance of black South Africans who called for BDS against the apartheid regime until it ended. As you are probably aware, the cultural boycott, including sports, was of particular significance in challenging apartheid in South Africa.

What Palestinians face due to Israeli policies is familiar to black and brown communities in the United States and vice versa. That is why when activists in Ferguson were facing tear gas by police while organizing to demand justice for Mike Brown during the summer of 2014, Palestinian activists were tweeting them advice about how to deal with its effects and people in Ferguson were holding up signs in solidarity with Palestinians under Israeli bombs in Gaza. That is why in 2015, more than 1,100 Black activists, artists, scholars, students and organizations, including Angela Davis, Cornel West, and Talib Kweli, signed a Black Solidarity Statement with Palestine, declaring their commitment to working to “to ensure Palestinian liberation at the same time as we work towards our own.” That is why more than 60 leading Black and Palestinian artists and activists, including Ms. Lauryn Hill, Alice Walker, and Danny Glover were featured in a video highlighting challenges that both communities are confronting, including militarized policing and the prison industry. That is why in rallies across the United States today people are chanting: From Palestine to Mexico, All These Walls Have Got to Go.

Palestinians have for decades been fighting policies similar to the ones people are protesting in cities across the United States. This May, Palestinians will mark 69 years since they were forcibly displaced off their lands during the establishment of the state of Israel. Since then Israel has continued to expel, deny, and ban Palestinians, tearing apart families and keeping millions of refugees from returning home. Israel’s brutal military occupation of the West Bank, Gaza, and East Jerusalem has now lasted 50 years and has included the building of illegal Jewish-only settlements on stolen Palestinian land, the construction of an apartheid wall to further keep Palestinians out, and the destruction of more than 25,000 Palestinian homes. Within Israel there is a purposeful policy to divide people based on their nationality and religion, with more than 50 laws that privilege Jewish citizens over non-Jewish citizens. Palestinian athletes have been subject to violence by Israeli soldiers and not been allowed to travel to participate in competition, including the Rio Olympics. And this summer will mark three years since Israel’s deadly assault on Gaza, when Israel dropped an estimated 20,000 tons of explosives, killing at least 2,200 Palestinians, including 500 children. All of these war crimes against Palestinians are funded by the United States, which sends at least $3.8 billion in military aid to Israel every year.

Your trip to Israel comes at a time of growing cooperation between the US and Israeli governments, as evidenced by the close relationship between President Trump and Prime Minister Netanyahu, who both are eager to work together to continue implementing their right-wing, racist agendas. The dehumanizing language US politicians use against refugees fleeing to the United States and the decision to ban them is reminiscent of Israeli officials calling asylum seekers from Sudan and Eritrea “infiltrators” and detaining them in the desert. Your visit also comes at a time of growing public outcry against all oppressive policies. Palestinians are struggling today for their rights just like those who struggled in the U.S. Civil Rights and South African anti-Apartheid Movements, and just like brown and black communities are doing so across the United States now.

In 2005, Palestinian civil society issued a historic, rights-based call for people of conscience worldwide to stand with them and launch boycott, divestment, and sanctions (BDS) campaigns targeting Israel and institutions complicit in its oppressive policies until its complies with international law and guarantees Palestinian rights. Since the call there have been hundreds of BDS successes worldwide. Just like in other struggles, celebrities are taking a stand against Israel’s crimes and supporting the Palestinian call for international solidarity. Musicians like Lauryn Hill, Talib Kweli, Roger Waters, Elvis Costello, and the late Gil Scott-Heron have canceled concerts or refused to play in Israel. Other cultural figures, including Naomi Klein, Judith Butler, Angela Davis, and Alice Walker have joined the impressive ranks of those supporting BDS as a time-honored nonviolent tactic to achieve for freedom, justice, and equality.

You now have an opportunity to speak out against the injustices facing Palestinians. We urge you to rethink your participation in this trip to Israel and the message it will send to your millions of fans who look up to you. The power athletes have in contributing to the fight for justice is evidenced in the legacy of the late Muhammad Ali, who himself was an advocate for Palestinian rights. Angela Davis recently said at the Women’s March in DC attended by tens of thousands of people: “Women’s rights are human rights all over the planet and that is why we say freedom and justice for Palestine.” Please reconsider taking this trip to ensure you are standing on the right side of history.

Updated on 2/17/2017: Since the publishing of this letter, which he read, Seattle Seahawk Michael Bennett has stated, “I’m not going to Israel.” Check this space if more athletes follow suit. In addition, Harry Belafonte, Michelle Alexander and Danny Glover added their signatures to the letter.