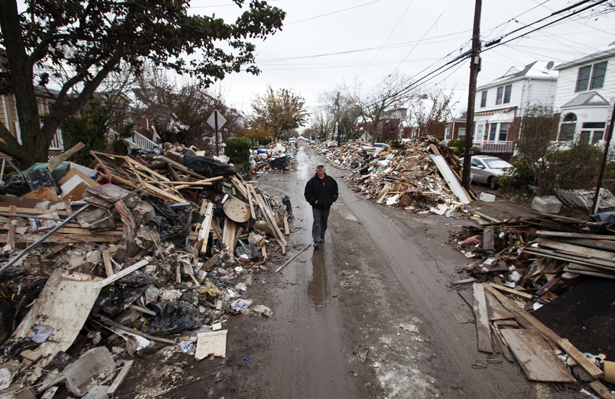 It’s been one year since Hurricane Sandy made landfall on the eastern coast of the United States, affecting twenty-four states and devastating parts of New Jersey and New York. Thousands of homes and businesses were destroyed. Millions were left without power. As many as 100 people died; most of whom drowned as the storm surged in Staten Island and Queens. At $65 billion, Sandy was the second costliest storm in US history.

Today, communities that were reduced to rubble are steadily recovering. And yet, one year later, policymakers have yet to address climate change, which undoubtedly contributed to the strength, magnitude and danger of Sandy. There is little discussion of rebuilding in a way that better prepares us for the ravages of future storms. And after Washington’s most recent shameful display of deadlock and dysfunction, it would be wishful thinking to presume that Congress will act on this issue anytime soon.

That’s why last week’s Roosevelt Institute Four Freedoms awards ceremony was all the more significant for honoring someone who has devoted his life to the stewardship of our planet—legendary humanist, poet, essayist, novelist, fifth-generation Kentucky farmer and activist Wendell Berry.

Over the course of his life, Berry has written and spoken about a number of issues, including war, corporate corruption and the death penalty. But it is his work as an environmental activist and advocate of small-scale sustainable agriculture that has, perhaps, had the greatest impact on our national conversation.

Berry picked up where Thoreau left off, providing, as Michael Pollan has written, “a sturdy bridge over the deep American divide between nature and culture.” And in teaching us to cultivate our own gardens, and reap the wild in our own backyards, Berry “marked out a path that led us back into nature, no longer as spectators but as full-fledged participants.”