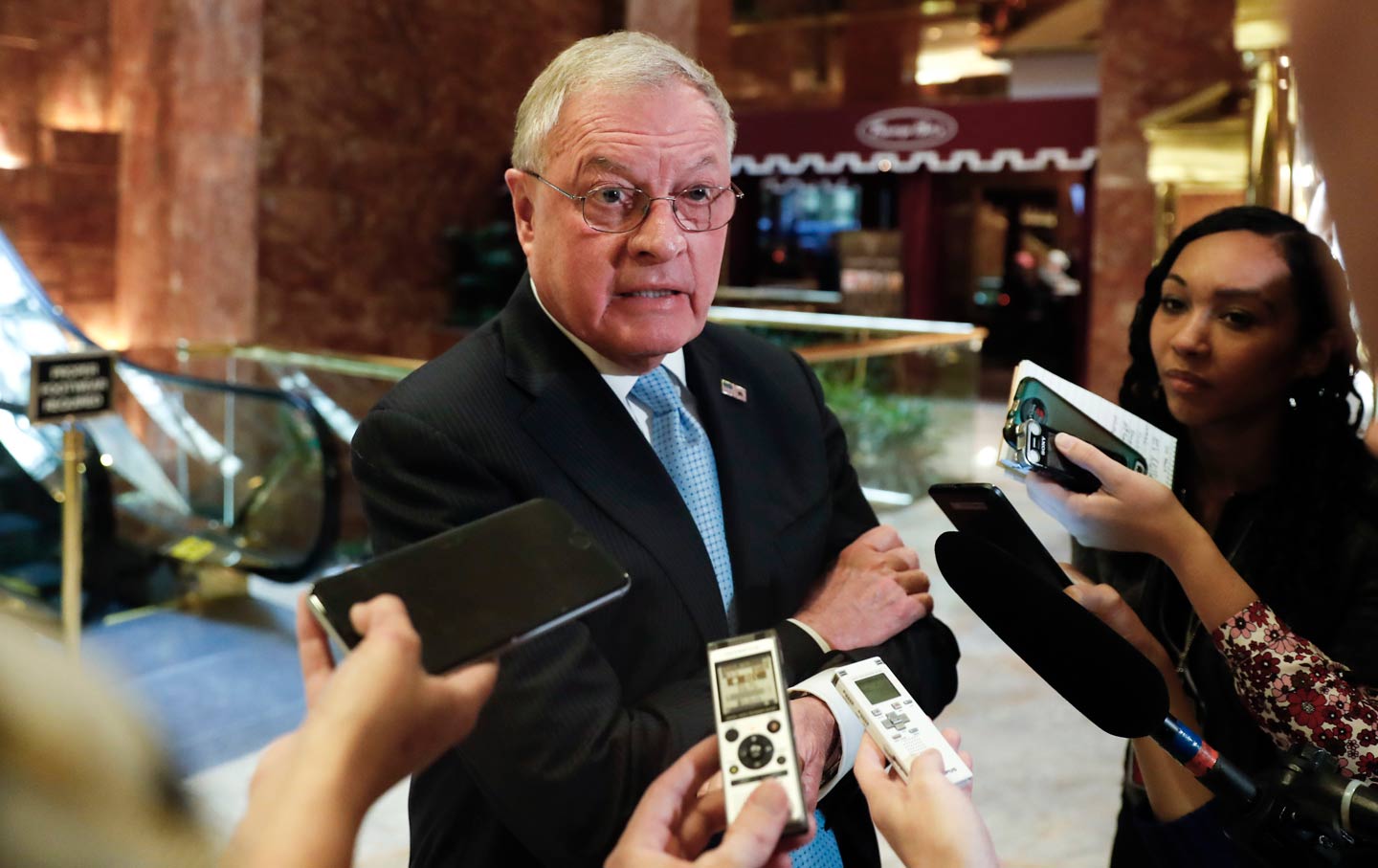 Over the past two days, President-elect Donald Trump has put together a national security team that will move US foreign policy far to the right. The most shocking appointment, announced Thursday, was retired Army General Michael Flynn, a fanatical opponent of radical Islam, as his national security adviser. On Friday, Trump named Kansas GOP Representative Mike Pompeo to run the CIA. Pompeo is a member of the House Intelligence Committee who strongly opposed the Iran nuclear deal as well as the post-Snowden “reforms” of US intelligence.1

But so far, little attention has been paid to a retired Army lieutenant general, Joseph “Keith” Kellogg, one of Trump’s closest military and foreign-policy advisers. Kellogg is a former contracting executive who is considered a front-runner for a senior position at the Pentagon. He has been among the small group of advisers seen entering and leaving Trump Tower this week.2

Kellogg is in a prime spot to select the officials to run Trump’s military policies at the Pentagon.

Kellogg played a critical role in the disastrous US occupation of Iraq as the director of operations of the Coalition Provisional Authority (CPA), which ran the country after the 2003 invasion. Since leaving the military, he has been deeply involved in the high-tech, computer-driven style of warfare that has spawned the enormous business complex of contractors and suppliers that ring Washington, DC, from the CIA to the National Security Agency.3

And with Flynn, the former director of the Defense Intelligence Agency, now in charge of Trump’s national security team, Kellogg is in a prime spot to select the officials to run Trump’s military policies. In that position, Kellogg brings 20 years of experience as an executive for some of the nation’s largest and most notorious military contractors.4

Until recently, Kellogg worked as vice president of strategic initiatives for Cubic Corp., which provides ground combat training and other technical support to the Pentagon. Before that, Kellogg was the president of Abraxas, a highly secretive subsidiary of Cubic that was founded by retired CIA operatives.5

In 2012, Abraxas was the subject of intense media scrutiny for developing a powerful surveillance tool called TrapWire. According to cables released by WikiLeaks and analyzed by The New York Times, the software could analyze “images from surveillance cameras and other data to try to identify terrorists planning attacks.”6

From 2005 to 2009, Kellogg was a top executive with CACI International, one of the companies that supplied interrogators who abused and tortured Iraqi prisoners at the US military prison at Abu Ghraib.7

Before joining the contracting world, Kellogg spent over 20 years in the Army. During the 1960s, he fought in Vietnam, and later rose through the ranks to become the commander of the 82nd Airborne Division, widely known as the world’s largest parachute force. He ended his military career in 2003 as the Pentagon’s director of command, control, and communications for the Joint Chiefs of Staff.8

Kellogg was a top executive at CACI International, which supplied interrogators who tortured Iraqi prisoners.

There, Kellogg worked on using information technology for what military planners called “network centric warfare”—the precursor to the sophisticated combination of electronics and intelligence that drives today’s air and drone wars. His work in that area made him a favorite of Donald Rumsfeld, who was secretary of defense at the time and a big supporter of the network centric concept, according to the Los Angeles Times.9

In 2003, Kellogg left the Pentagon to join the Oracle Corporation. At Oracle, which was co-founded by computer guru Larry Ellison, Kellogg ran its homeland security solutions division, providing IT to defense and intelligence agencies. During that time, he was also named to the board of directors of GTSI Corporation, once a huge provider of government IT.10

Being a businessman is almost a prerequisite for working with Trump. But Kellogg’s work in post-invasion Iraq stands in sharp contrast to the views Trump put forward in his campaign against Hillary Clinton. Last February, in a widely quoted interview on Fox, Trump called the US invasion of Iraq “the worst decision ever made in the history of our country.” In the months that followed, he repeatedly blasted Clinton for supporting the invasion, which—as he rightly argued—planted the seeds for the rise of ISIS, the Islamist terrorist army that US, Iraqi, and Kurdish forces are now trying to dislodge from Iraq and Syria.11

He was COO for reconstruction for Paul Bremer, the Kissinger associate appointed by Bush to run the Iraq occupation.

Yet, as a top CPA official, Kellogg played a critical role in the disastrous occupation that helped spawn the insurgent army that later morphed into ISIS. At the CPA, he was the chief operating officer for reconstruction for Paul Bremer, the associate of Henry Kissinger appointed by Bush and Rumsfeld to run the occupation. In that post, Kellogg hired dozens of contractors and staffers—many of them young right-wing ideologues from Washington—to award construction contracts.12

“I’m the guy who’s supposed to make the trains run on time,” Kellogg told the Los Angeles Times (according to CACI, he “played a key role in the effort to rebuild Iraq and bridge the link between security and critical infrastructure”). This was during the time when Iraq was seen as a bonanza for US corporations, who flocked to Iraq in droves as Rumsfeld and his neoconservative allies promised to privatize the country and transform it into a free-market paradise. I described the frenzy in a cover story for The Nation in 2003:13

Behind closed doors in the Pentagon and State Department and on Washington’s K Street corridor, executives, bankers, trade lawyers and consultants are using their influence to create opportunities for future profits in Iraq. Those groups, and the relationships they have developed with Iraqi exiles and Washington insiders, underscore the politicized nature of the US rebuilding effort and the hopes of many officials that Iraq will become an engine of growth, not only for the region but for US corporations searching for new markets and investment sites.14

But the big plans of the neocons quickly fell apart as an insurgency began in earnest, sparked in large part by Bremer’s decision to disband the Iraqi Army. Some of the generals purged from the military later formed the core of ISIS, as recounted in the excellent book on its history by Joby Warrick, Black Flags.15

One of the incidents that sparked the insurgency was the cruel treatment of Iraqi detainees in the infamous prison at Abu Ghraib. CACI, then as now a major Pentagon contractor, employed several of the interrogators who were involved in the abuse at Abu Ghraib (it is still fighting a lawsuit filed by four detainees, who claimed they were tortured by CACI personnel).16

In 2005, about eight months after the Abu Ghraib scandal was exposed by journalist Seymour Hersh and CBS News, CACI hired Kellogg to be executive vice president for CACI’s research and technology group. At the time, a CACI press release said, Kellogg’s group provided “intelligence, information technology, and logistics support for the US Army and other Defense Department clients.” He worked for CACI through the end of the Bush administration.17

Before joining Cubic, Kellogg worked for several other important intelligence contractors. He was once a board member of Analex Corp., a contractor for the Pentagon’s Counterintelligence Field Activity office that was accused after the 9/11 attacks of domestic spying (it was later sold to the UK’s QinetiQ). In 2009, Kellogg was appointed CEO of RedXDefense, which describes itself as a “complete solution provider for defense against explosive threats.”18

In Trump’s presidential run, Kellogg’s name first surfaced in March, when Trump named him to his foreign policy team in an interview with The Washington Post. During the campaign, Kellogg mostly played a background role, but he has occasionally appeared on news shows to defend Trump’s controversial positions.19

In August, for example, Kellogg was forced to explain Trump’s call for the “extreme vetting” of immigrants, which the candidate said would prevent “those who do not believe in our Constitution or who support bigotry and hatred” from crossing US borders.20

On CNN the next day, Kellogg described the remarks as the “beginning of a new dialogue,” adding that “we need a very robust way of looking at people coming into the country.… We’re focused on the whole concept of the ideology and of the vetting.”21

Still, Kellogg’s past should prepare him well for recruiting former officials and contractors into today’s privatized military and intelligence services. He’s also in the running for a top Pentagon position himself, Military Times reported.22

Several names have been mentioned in recent days for secretary of defense. They include outgoing Republican Senator Kelly Ayotte, who is well known as a militant neoconservative, and Arkansas Senator Tom Cotton, an Army veteran of the Iraq and Afghanistan wars who has been outspoken in his support for waterboarding as an interrogation technique and adamantly backs increased military spending.23