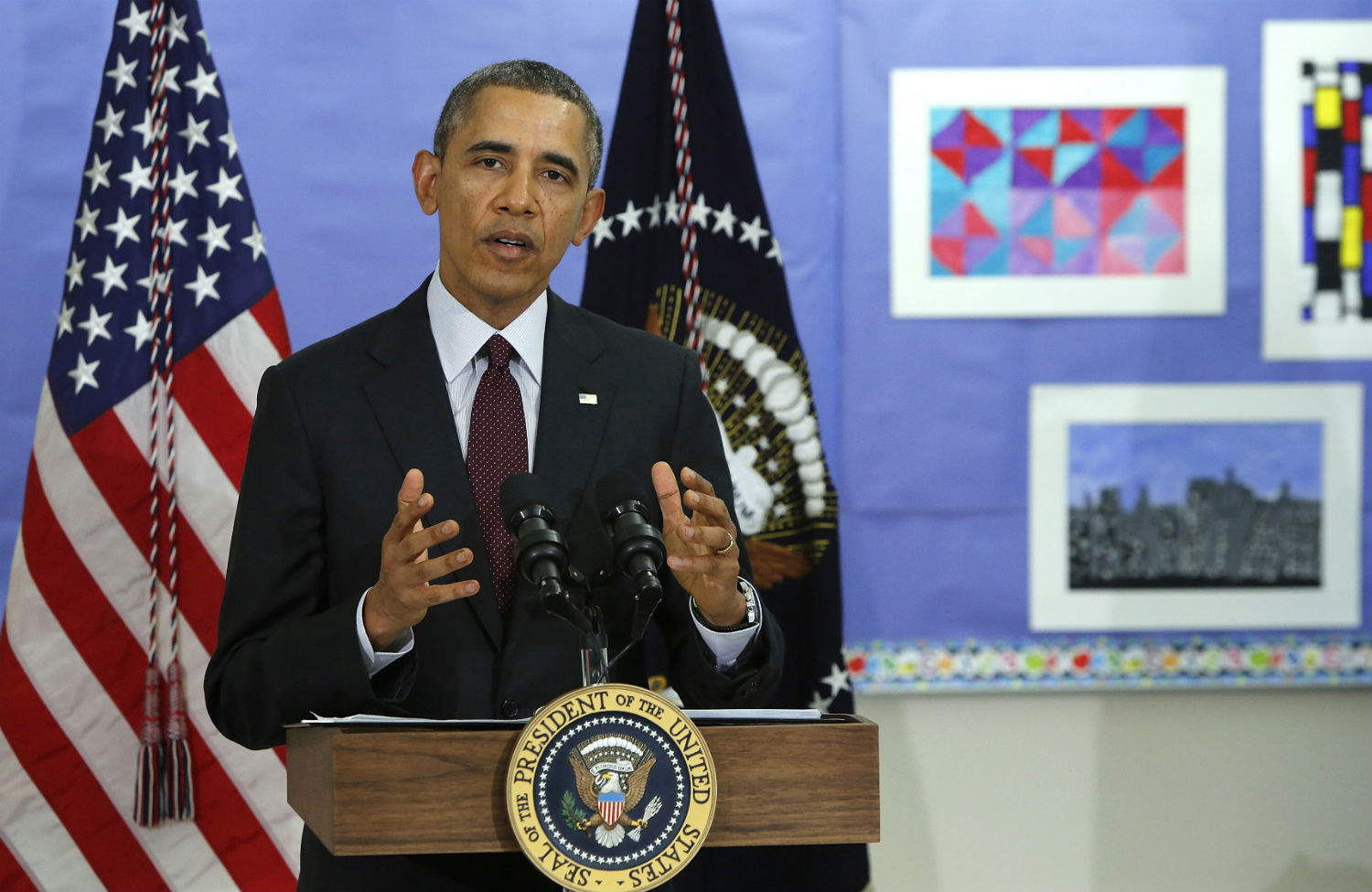 It’s foreign policy week for President Obama. The jet-lagged president, who made a quick, previously unannounced visit to Afghanistan over the Memorial Day weekend, plans a major speech on Wednesday at West Point to outline his administration’s foreign policy approach. It will, the administration hopes, clear up the confusion that Obama created in late April when, in somewhat off-the-cuff remarks during a news conference with President Aquino, Obama expressed frustration about his critics, especially those who say that he’s not strong or tough enough. (According to the White House, part of Obama’s message on Wednesday can be summed up in four words: “Don’t do stupid stuff.”)

Before we preview Obama’s speech tomorrow—and check back here tomorrow and later in the week, after the speech, for a detailed Nation critique—let’s review some of Obama’s comments back on April 28, in Manila.

In regard to his critics on Syria, he said:

So if you look at Syria, for example, our interest is in helping the Syrian people, but nobody suggests that us being involved in a land war in Syria would necessarily accomplish this goal. And I would note that those who criticize our foreign policy with respect to Syria, they themselves say, no, no, no, we don’t mean sending in troops. Well, what do you mean? Well, you should be assisting the opposition—well, we’re assisting the opposition. What else do you mean? Well, perhaps you should have taken a strike in Syria to get chemical weapons out of Syria. Well, it turns out we’re getting chemical weapons out of Syria without having initiated a strike. So what else are you talking about? And at that point it kind of trails off.

And on Ukraine, Obama said:

Well, what else should we be doing? Well, we shouldn’t be putting troops in, the critics will say. That’s not what we mean.Well, okay, what are you saying? Well, we should be arming the Ukrainians more.Do people actually think that somehow us sending some additional arms into Ukraine could potentially deter the Russian army? Or are we more likely to deter them by applying the sort of international pressure, diplomatic pressure and economic pressure that we’re applying?

And then he summed it up using the now-infamous baseball metaphor:

The point is that for some reason many who were proponents of what I consider to be a disastrous decision to go into Iraq haven’t really learned the lesson of the last decade, and they keep on just playing the same note over and over again. Why? I don’t know.But my job as Commander-in-Chief is to look at what is it that is going to advance our security interests over the long term, to keep our military in reserve for where we absolutely need it.… We don't do [things] because somebody sitting in an office in Washington or New York think it would look strong. That's not how we make foreign policy.… And that may not always be sexy. That may not always attract a lot of attention, and it doesn’t make for good argument on Sunday morning shows. But it avoids errors. You hit singles, you hit doubles; every once in a while we may be able to hit a home run.

Back then, Obama’s comments created pushback from the hawks, who made fun of the president for talking about hitting singles and doubles—even though the president could have pointed out that under President George W. Bush the United States mostly hit into double plays, committed a record number of errors, struck out a lot and finally topped the Chicago Black Sox of 1919 for sheer infamy. In fact, what Obama said, especially in regard to Syria, Iraq and Ukraine was pretty much on the mark. But the White House believes that it’s time for Obama to outline his foreign policy in more concrete and thoughtful detail. We’ll see.

As I’ve written in the past, on a foreign policy scale from one to ten, with left-wing doves at one and neoconservative hawks at ten, Obama falls, Goldilocks-like, nearly exactly in the middle. White House aides, in previewing the speech for reporters, used a weirdly middle-of-the-road description of what Obama’s foreign policy is designed to be, saying that it is “both interventionist and internationalist, but not isolationist or unilateral.” In other words, not too hot, not too cold—just right! Yet Obama has alienated many in his base, and among the voters who elected him, by pursuing a global “war on terrorism” and vastly increasing the use of armed drones, while seeming to stumble from interventionist (Libya) to internationalist (Syria) to isolationist (Bahrain) to unilateral (Israel) all at once in the Middle East. And while on Ukraine Obama has wisely refrained from getting involved in a showdown with Russia’s Vladimir Putin, whose interventionism the United States has little wherewithal to halt, the United States is slowly building up alliances in East Asia in what looks like an effort at containing China that is certain to be even less effective.

According to Politico, Obama will expand on the Goldilocks theme:

At West Point, Obama “will explain how we move out of a period of war in Iraq and Afghanistan to a new stage in our engagement with the world, what we expect to accomplish over the next two and a half years of the administration, and how our approach in hot spots like Ukraine, Iran and Syria fit into that construct,” the official said. “You will hear the president discuss how the United States will use all the tools in our arsenal without overreaching.”

And, raising more questions than it answers is the following comment from a White House official, reported in The New York Times:

Sketching familiar arguments but on a broader canvas, Mr. Obama will emphasize his determination to chart a middle course between isolationism and military intervention. The United States, he said, should be at the fulcrum of efforts to curb aggression by Russia and China, though not at the price of “fighting in eight or nine proxy wars.”

Did he really suggest that the “fulcrum” of US foreign policy will curbing “aggression” by Russia and China? And if “eight or nine proxy wars” is too many, how many is OK? And how many are we in already? (I’d argue that, at the very least, we’re fighting a proxy war against Iran in Syria and a proxy war against Pakistan in Afghanistan, but there are simmering proxy wars in Ukraine, Japan vs. China, parts of Africa and elsewhere—not to mention America’s nearly unilateral support for Israel in its proxy war against the Palestinians. So, perhaps four or five proxy wars are acceptable, but eight or nine aren’t.