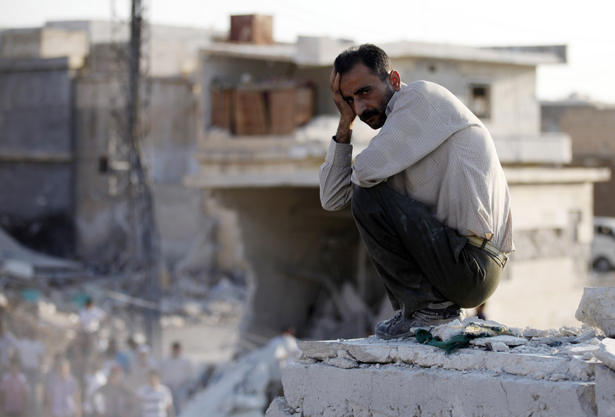 A man in front of houses destroyed during a Syrian Air Force air strike. (Reuters/Goran Tomasevic)

It’s time for the United States to surrender on Syria. The embattled government of Bashar al-Assad hasn’t won the war, exactly, but it’s demonstrated that it isn’t going anywhere. The rebels, increasingly dominated by hard-core Islamists and Al Qaeda types, aren’t fit to take over. For Washington, the only way out of the crisis, other than to give up the fight, would be conduct a military operation on the scale of the invasion of Iraq in 2003, and not only would that be a regional disaster for the United States, Syria and its neighbors, but it’s also out of the question, politically. Using American air power to dislodge Assad won’t work, though it could cause vast casualties, and it would force Russia and Iran to step up their military aid to Damascus in response. And simply upping the ante, by giving the rebels more and heavier weapons, will only prolong the carnage.

According to The New York Times, President Obama is deeply “frustrated” with the crisis in Syria, though it’s a crisis partly of his own making. The US-Russia diplomacy, including two rounds in Geneva since January, has not moved forward, and today the Times quotes an official involved in the discussion of what to do about Syria thus:

The Russian view is that their guy is winning, and they may be right. So we’re back to the question we faced a year ago: How do you change the balance and force the Syrians to negotiate?

Answer: you don’t. You give up.

According to the Times, a secret meeting just concluded of all of the intelligence agencies involved in the anti-Assad coalition, including the CIA and the spy chiefs from Britain, France, Saudi Arabia, Turkey, Qatar and the United Arab Emirates. If so, that’s a sign that the administration’s commitment to diplomacy is fading, and that Obama is prepared to let the covert operators go to work with a freer leash. Indeed, it appears that the Obama administration has given the green light to Saudi Arabia to supply the rebels with heavy weapons, including anti-aircraft missiles. Until now, Washington has been reluctant to send these devastating weapons to the anti-Assad forces because they will inevitably fall into the hands of Al Qaeda and its allies, who will use them against El Al and Western airlines.

On February 14, The Wall Street Journal reported the Saudi decision to send the missiles to Syria:

Washington’s Arab allies, disappointed with Syria peace talks, have agreed to provide rebels there with more sophisticated weaponry, including shoulder-fired missiles that can take down jets, according to Western and Arab diplomats and opposition figures.

Rebel leaders say they met with U.S. and Saudi intelligence agents, among others, in Jordan on Jan. 30 as the first round of Syrian peace talks in Geneva came to a close. That is when wealthy Gulf States offered the more sophisticated weapons.

In a second piece, The Wall Street Journal reported over the weekend:

The Obama administration, exasperated by stalled talks over Syria and seeking ways to pressure the regime and its Russian allies, plans to revisit options ranging from expanding efforts to train and equip moderate rebels to setting up no-fly zones, according to officials briefed on the deliberations.

To get a sense of how expansive the escalation might be, read the whole piece in The Wall Street Journal, if you have access.

The American officials involved in this escalation appear to believe that if they escalate the war in Syria, Russia will back down. They’re drawing that conclusion because when, in August 2013, President Obama threatened to rain cruise missiles down on Syria in response to Assad’s use of chemical weapons, the Russians stepped in at the last minute with a plan to rid Syria of its chemical arms. But that’s drawing the wrong lesson from that episode, because in August Obama had little to no support for the bombing of Syria, not from the Europeans, not from the Arab League, and certainly not from Congress or the American public. So the Russian initiative was designed, in the most embarrassing way, to bail out Obama. But a determined, US-led escalation of the war now would be a frontal challenge to Russian power and prestige, and Moscow won’t tolerate that.

Meanwhile, as diplomacy stalls, the United States says that it is still committed to the talks. But Secretary of State John Kerry is warning the Russians to back off, and he’s blasting Assad for stonewalling in Geneva. On Russia, Kerry slammed Moscow for sending weapons to Damascus, adding: “They’re, in fact, enabling Assad to double down, which is creating an enormous problem.” But in fact it’s the United States that is creating the problem, by using the CIA and its covert allies to wage a war of regime change.